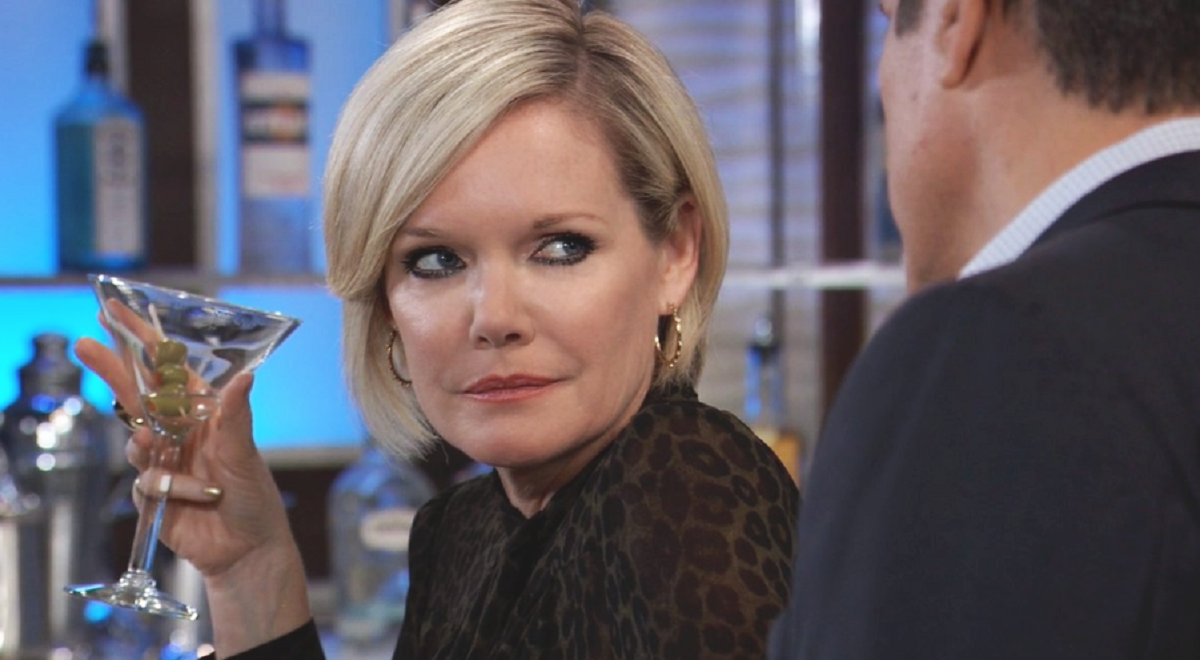 Ava knows all about what happened to Franco, as in a recent General Hospital episode, his father Scott Baldwin (Kin Shriner) had talked to her about it, and she remarked she thought him lucky to have a brand new life and memories, and Franco also had talked to her although as pre-2012 Andrew Cain (Steve Burton) mentally he didn’t remember any of their past together.

Ava understood and wasn’t offended and also had told Franco that she envied his chance to have a brand new life and identity! But Ava also knows that with that brand new life came Andrew Cain’s feelings, memories, and attractions, and they are focused like a beeline right towards Kim, with him confirming it by asking Ava if she had Kim’s phone number!

Ava also knows that even though Kim was still carrying a torch for Drew Cain (Billy Miller) he never reciprocated, other than their close platonic bonding over the tragedy of losing their only son, Oscar Nero Quartermaine (Garren Lake Stitt) to a brain tumor on May 1, 2019.

Julian had known this too, when he and Kim first started having a “friends with benefits” relationship, with he himself still carrying Alexis Davis (Nancy Lee Grahn) baggage. But, over time, he and Kim gradually fell in love with each other and had made plans to move to Manhattan together so that Kim could get away from all the reminders of her dead son that are in Port Charles, and get a new start.

Of course, people can’t always leave their problems behind – they usually go with the person in their heart and mind, but Kim and Julian were prepared to at least give it a good honest try! Julian had even put Charlie’s Pub for sale and had a buyer in Olivia Quartermaine (Lisa LoCicero) who wanted to keep it in the family for her and Julian’s son, Leo Falconeri (Aaron Bradshaw).

General Hospital Spoilers – And Then, There Was “Frankendrew”!

Then, this new combination of Franco Baldwin’s body and pre-2012 Andrew Cain’s memories and attractions to Kim happened! With the real Drew gone to Afghanistan and possibly not coming back, he’s not there to remind Kim that his old self in Franco’s body isn’t really him! He intended to go to Ethiopia and send back Dr. Andre Maddox (Anthony Montgomery) back to help restore Franco’s own mind and memories, but as General Hospital viewers know, that may not happen; at least not for a while, and possibly never, since there has been no definitive information released on Drew’s exit story with the exit of Billy Miller from the show!

Kim has been trying to rush Julian into the move, and even into a marriage, but he’s not biting; he doesn’t want to rush into anything even though he does love her because it’s not in her best interests, and besides, he has to wait for the closing to be complete on Charlie’s Pub. Kim has already been seen in a clinch with Franco at Oscar’s Meadow, witnessed by of all people, Cameron Webber (William Lipton) who was angry and confused even though he knows it’s not really Franco, just his body!

Ava knows and understands his attraction as Andrew to Kim also, and hers to him and she will likely advise her brother if he wants to keep Kim, he needs to fight for her or get Kim out of town with him as soon as possible!