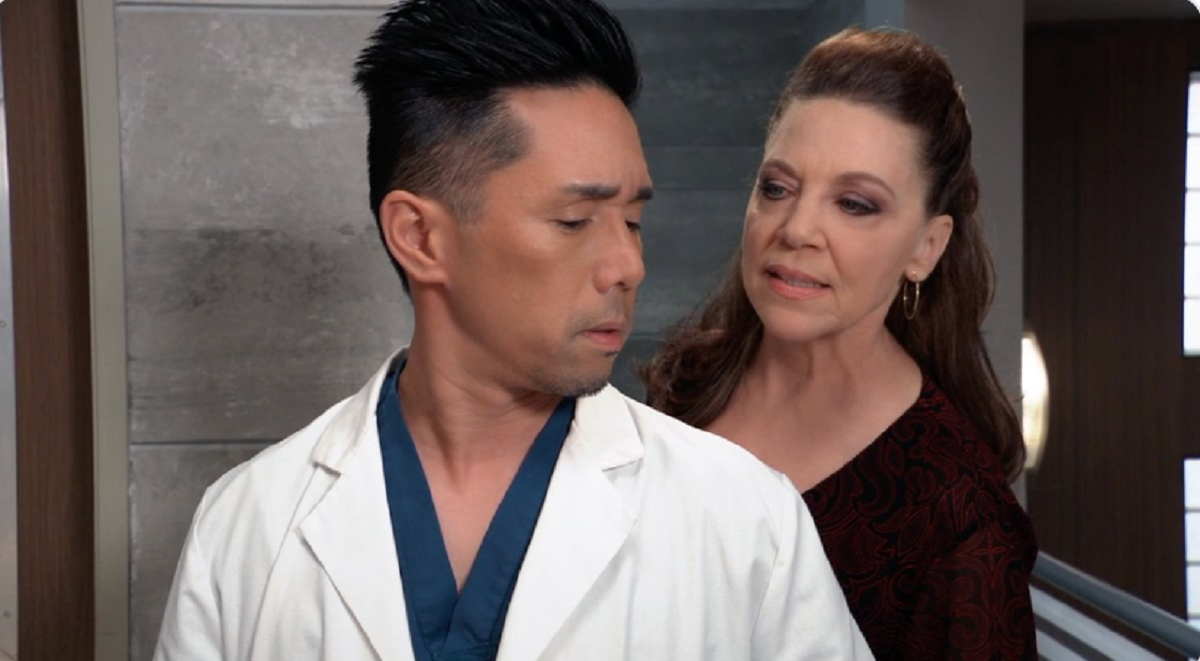 Neil and Alexis attended an event with drag queens. Diane thinks that was an interesting idea. Alexis tells Diane more about the date. Neil wanted to play bingo and win. Diane hopes they discussed more than bingo. Alexis assumes Neil has played drag bingo before this. Alexis is glad to know Neil has an ex since he knows so much about her. Neil explains his and his wife’s relationship.

Alexis helps Neil with his bingo cards. Neil thought he had mentioned his ex before, Alexis assured him he hadn’t. Diane says Alexis’ tactics were flawless. Alexis tells her more about the event. Diane can’t believe this is the whole date. Alexis assures her there is more. Alexis hit bingo and kisses Neil.

General Hospital’s Carly Corinthos (Laura Wright), Sonny Corinthos (Maurice Benard), and Lucas Jones (Ryan Carnes) are with Wiley Cooper-Jones (Eric and Theo Olson) at Kelly’s. Sonny takes the kids order to them as Carly talks to Lucas. Carly tells Lucas she saw Brad Cooper (Parry Shen) and Liesl Obrecht (Kathleen Gati) with their heads together. Lucas thanks Carly for the heads up. Lucas stops by the hospital with Wiley. Lucas needs to get some answers.

General Hospital’s Josslyn Jacks (Eden McCoy) and Dev Corbin (Ashton Arbab) are outside Kelly’s discussing school. Jasper Jacks (Ingo Rademacher) agrees that Jocelyn could take a break from school. Dev promises Joss that he, Cameron Webber (William Lipton) and Trina Robinson (Sydney McKayla) will all be there for her. Sonny ushers the kids off to school Jax says he should have been given a heads up about Dev. Sonny doesn’t believe that Dev is any of Jax’s business.

Sonny tells Jax that Dev was living with his grandmother and they took him in to help him. Jax wants Joss to move in with him. Joss gets to school and sees her and Oscar’s picture in a locker. Jocelyn asks for the photo. Sonny is annoyed with Jax. Carly will think about letting  Joss live with Jax. Carly tells Sonny they need to back up on the adoption idea. Joss gives Dev advise at school. Carly points out that Sonny would have reacted the same. Sonny thinks Jax should pay more attention to Aurora.

General Hospital’s Brad has doctored the test results as Liesl ordered him to fix. Liesl has agreed to Brad’s terms but he doesn’t trust her. Brad accuses Liesl of thinking he is an idiot. Brad threatens Liesl with the test. Liesl is shocked that Brad has grown a spine. Liesl says things will be fine as long as her family is safe.

Valentin Cassadine (James Patrick Stuart) questions why Liesl has been in the lab. Liesl assures Valentin that Sasha Gilmore’s (Sofia Mattsson) identity is safe. Brad and Lucas discuss his relationship with Liesl. Lucas is not happy with Brad. Liesl comments to Lucas on how lucky Wiley is to have two loving fathers.

General Hospital’s Nina Reeves (Cynthia Watros) sits with Sasha Gilmore (Sofia Mattsson) and tells her how brave and strong she is. Hamilton Finn (Michael Easton) says he is cautiously optimistic that Sasha will fully recover. Michael tells Nina that he offered to call some of Sasha’s friends. Nina thinks Sasha is just comfortable with the here and now.

Finn calls Sasha’s family into her room. Finn says Sasha is well on her way to recovery. Sasha and Michael are given time alone. Nina tells Liesl that Sasha will be fine. Nina says she can get married on time. Nina believes the stars have aligned to make her dreams come true. Finn gives Valentin a message from Anna. Nina wants Valentin to take care of Cassandra Pierce (Jessica Tuck). Valentin thinks Sonny will take Cassandra out.

General Hospital’s Shiloh Archer (Coby Ryan McLaughlin) and Nelle Benson (Chloe Lanier) talk. Nelle tells Shiloh that Harmony Miller (Inga Cadrenal) has told her so much about him. Nelle can’t believe that anyone bought Shiloh’s book or his teachings.

Shiloh says he has seen people like Nelle before, she says people who need a family. Nelle wants to help reunite Shiloh with Wiley. Nelle lies to the officer who is taking her to a meeting. Nelle explains that she and Shiloh have a common enemy. Nelle wants to give Shiloh back his son and his money.