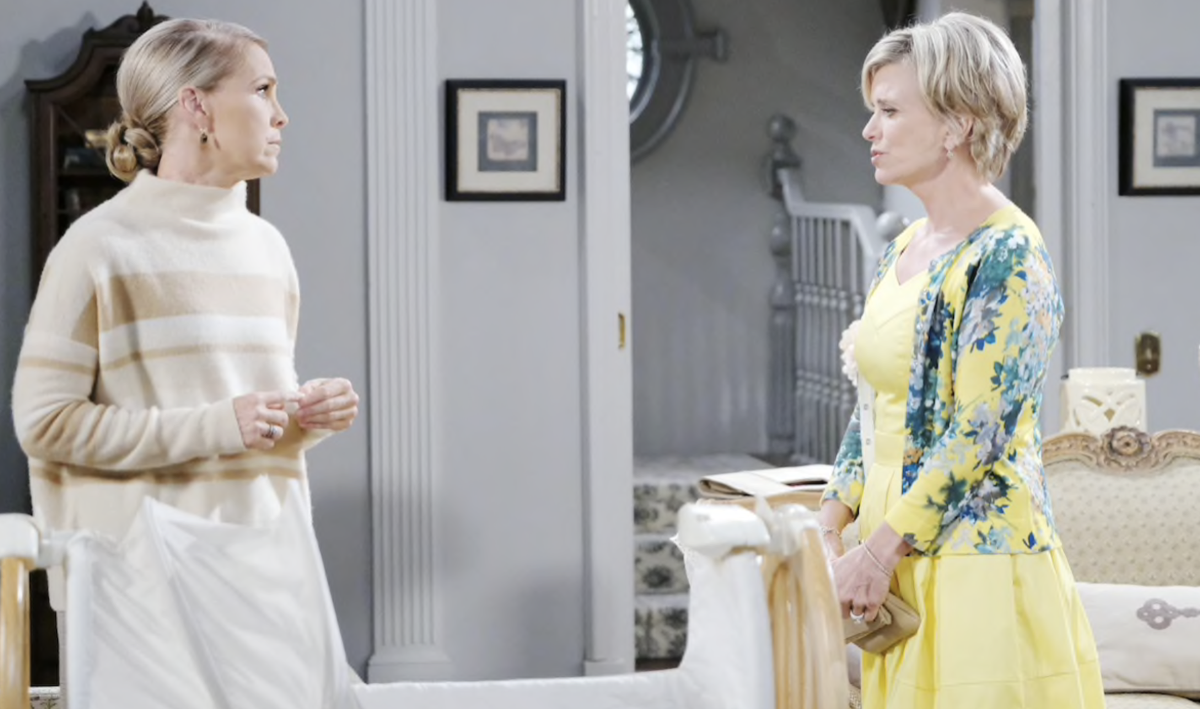 In this week’s Days of Our Lives weekly promo video, it’s all about Vivian Alamain (Robin Strasser) and Kate DiMera (Lauren Koslow) and the aftermath of Vivian’s thinking she shot Kate “graveyard dead”! First, Vivian brags to Stefan that she shot Kate and buried her in the cemetery; then Gabi Hernandez DiMera (Camila Banus) asks Stefan if he’s sure that she’s dead, with a ghastly scene of Kate’s hand reaching through the top of the mound of loose potting soil like dirt that Vivian piled in on top of her after she’d shot her into the freshly dug grave!

The scene shifts to Salem University Hospital, where Dr. Kayla Johnson (Mary Beth Evans) and Nurse Haley Chen (Thia Megia) tend to Kate when she’s brought in. Obviously someone cared enough about Kate to call 911 unless she dragged herself into the emergency room! Kayla asks Kate if she can hear her; Kate snarks, she’s shot, not dead! Back to the DiMera mansion, where Stefan warns Vivian that she will point the finger at her – and Vivian responds, make sure she never gets that chance!

Tuesday, Kayla and Jennifer Horton (Melissa Reeves) are shocked by a grisly arrival; this is probably Kate, fresh from being shot and buried in the cemetery! Meanwhile, Stefan is upset when Gabi wants to call the cops on his mother! Also on Tuesday, Hope Brady (Kristian Alfonso) reveals heartbreaking news about Julie to her father Doug Williams (Bill Hayes), and Jack and JJ Deveraux (Matthew Ashford, Casey Moss) attempt to make a deal with Dr. Wilhelm Rolf (William Utay).

Days of Our Lives Spoilers: Kristen’s Partner in Crime – Who Else is in Charge of Dr. Rolf's Serum Scheme? @celebratesoaps #dool #days #daysofourliveshttps://t.co/9auyGcyRqq

Rolf Completes The Serum For Jack – Eric Breaks Up With Sarah

Thursday, Rolf completes the memory serum for Jack, but then finds out the laboratory at Salem University Hospital, where Jennifer had arranged for him to work, has been trashed! Eric officially breaks up with Sarah, which she will not be surprised about. Also on Thursday, Sarah and Nicole come face to face, Jennifer and Jack are crushed by an unexpected setback, Brady has a tense encounter with Kristen, and Eve Donovan (Kassie DiPaiva) is determined to destroy Jack’s happiness after she suffers a tough loss.

Friday, Jack and Jennifer suspect Eve (who else?) trashed the lab; and Vivian sneaks into the hospital to finish off Kate! Also on Friday, Xander Kiriakis (Paul Telfer) tells Sarah he knows her secret, Eve tries to convince Vivian to speak to Stefan on her behalf, and Brady finds himself battling temptation.