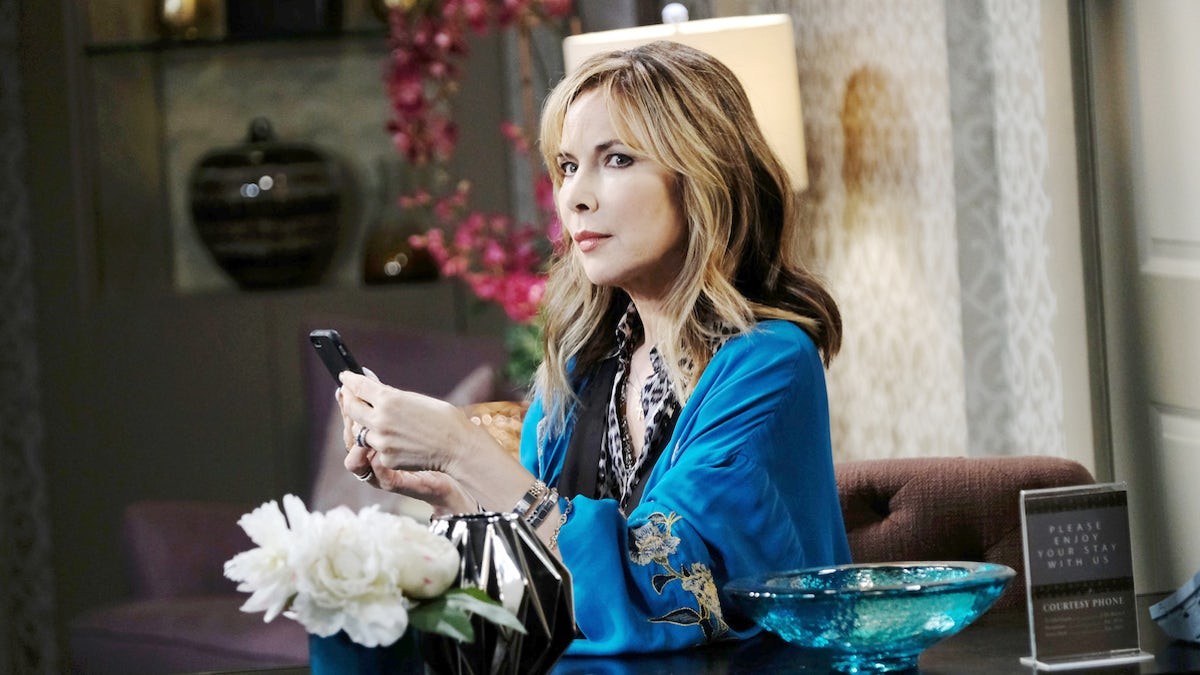 Days of Our Lives spoilers tease that there are five key takeaways for the viewers to look for in this week’s show!

DOOL viewers saw Vivian Alamain (Robin Strasser) and Kate Roberts DiMera (Lauren Koslow) have an unexpected encounter in the park adjoining Horton Town Square. Kate screamed, being certain she had killed Vivian, and Vivian, holding the gun that her son Stefan DiMera (Brandon Barash) had just returned to her, told Kate she was going to kill her!

She forced Kate to the cemetery and shot her into a freshly dug grave and buried her there. This week’s Days of Our Lives weekly preview promo shows Vivian admitting to Stefan that she had killed Kate (or so she thinks) and then shows Kate’s hand coming up out of the pile of loose dirt Vivian piled in on top of her! Kate will make it out of the grave and into Salem University Hospital alive, but very dirty!

Jack Deveraux (Matthew Ashford) and Jennifer Horton, (Melissa Reeves) back from Chicago with Dr. Wilhelm Rolf (William Utay) in tow, try to get Jack’s memories back.

Jennifer gets Rolf set up with a lab at Salem University Hospital, and he does manage to make a batch of amnesia serum for Jack, but returns to find the lab trashed! Eve Donovan, (Kassie DiPaiva), after a tough loss, is determined to destroy Jack’s happiness and Jack and Jennifer will suspect that Eve was the one to trash the lab!

She knows that Nicole is the love and Eric’s life and she cannot compete with her, but struggles with whether to tell him she is pregnant because she knows he will then have divided loyalties between her and Nicole because of the baby, which she is sure is his although she was sleeping with both him and Rex Brady (Kyle Lowder) during the same time period, although there were a few days in between Rex leaving and her moving in with Eric. Xander Kiriakis (Paul Telfer) will find out her secret and offer to help.

While still in the farmhouse near Chicago, Eric and Nicole talk things out and he does admit to her that he had gotten involved with Sarah during the time that Kristen DiMera (Stacy Haiduk) was impersonating Nicole. Nicole will be understanding and ask Eric if he loves Sarah; he will probably tell her not as much as he loves her!

Eric, of course, has to choose between the two women, and he chooses Nicole, as Sarah expected he would, and then when Eric and Nicole return to Salem with little Holly Jonas (Scarlett and Harlow Mallory) he breaks up with Sarah.

Days Of Our Lives #DOOL Spoilers: #Chabby In Paris – Who is Trying to Destroy Chabby Marriage and Why? @SoapOperaSpy https://t.co/DwhWImourT

If she had called 911 right away, Julie’s heart may not have suffered so much damage that she needs a transplant! Ciara’s mother, Hope Brady (Kristian Alfonso) realizes that she cannot leave her father, Doug Williams (Bill Hayes) out of the loop forever and delivers the devastating news that Julie needs a new heart, but is too old to be on a transplant list!

That’s it for this week’s Five Key Takeaways From Days of Our Lives; stay tuned to the show and keep checking DOOL spoilers frequently for all the latest news, updates and developments!