Days of Our Lives Spoilers: Jordan Returns To Salem; Rafe Falls In Love? 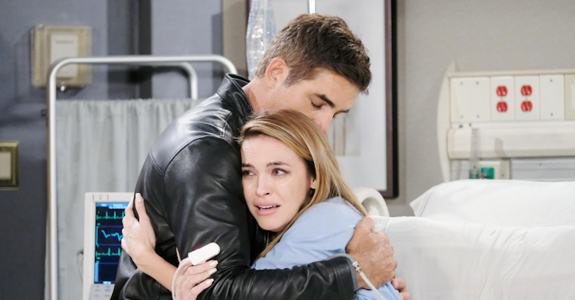 Days of Our Lives spoilers tease that Jordan Ridgeway (Chrishell Hartley) will be released from Bayview and return to Salem, but she will need someone to take legal responsibility for her; and that will be Rafe Hernandez (Galen Gering)! He’s already taking care of her baby David Ridgeway (Dexter and Jaxton Ellis) so bringing mother and baby together is the perfect plan in Rafe’s eyes; but will care and concern turn to passion once Jordan’s in his care?

The Days of Our Lives Fall Preview gives fans a hint of what’s to come for Jordan and Rafe; there is a scene of Jordan in a nurse’s or perhaps candy striper uniform involved in a passionate kiss with Rafe! Viewers will recall that Rafe and Jordan go back a few years, to before he was involved with Hope Brady (Kristian Alfonso) but after his divorce from Sami Brady (Alison Sweeney). He had been injured in the line of duty and Jordan was his physical therapist.

First, Jordan started to fall in love with him, but was afraid to act on it because of the issue of a medical professional becoming romantically involved with a patient, but then she let her guard down when Rafe started teasing he was going to fire her so they could date! They eventually became romantically involved, however, Kate DiMera (Lauren Koslow), who had hired Jordan, became concerned about Jordan and Rafe’s rapid involvement with each other and did a background check.

Kate DiMera Found That Jordan Ridgeway Had A Criminal Family

Kate’s background checks turned up that Jordan had a criminal family, her stepfather being Clyde Weston (James Read) and her stepbrother being Ben Weston (Robert Scott Wilson), the notorious “Necktie Killer!” Ben first came to Salem calling himself “Ben Rogers” because he didn’t want to be tied to Clyde. When Jordan found out that Ben was in town she made contact, but then thanks to Kate’s little trip to Poplar Bluff, Missouri, their home town, Clyde showed up in Salem and Jordan was scared to death and Ben didn’t like Clyde being in town; he’d been going by “Rogers” so he could start a new life and no longer be associated with Clyde!

However, Ben and Clyde started getting closer and Jordan finally got a job in New York after being blackmailed by Clyde! She then returned in February 2019 with serious mental problems apparently caused by a car accident she’d been in, and landed in Bayview. She later contacted Rafe to go to California to get her baby son, and he’s had David ever since.

Rafe Hernandez And Jordan Ridgeway Appear To Be Rekindling Their Romance

From what can be seen in the fall preview video, it appears that Rafe and Jordan will be rekindling their romance, or at least Jordan’s going to try! It’s hard to tell who started that steamy kiss but Rafe certainly doesn’t seem to be complaining! It will be the perfect situation for a romance to rekindle once Jordan’s out of Bayview and in Rafe’s home with baby David, although Ben will be worried for his girlfriend Ciara Brady (Victoria Konefal) once Jordan’s on the loose again!