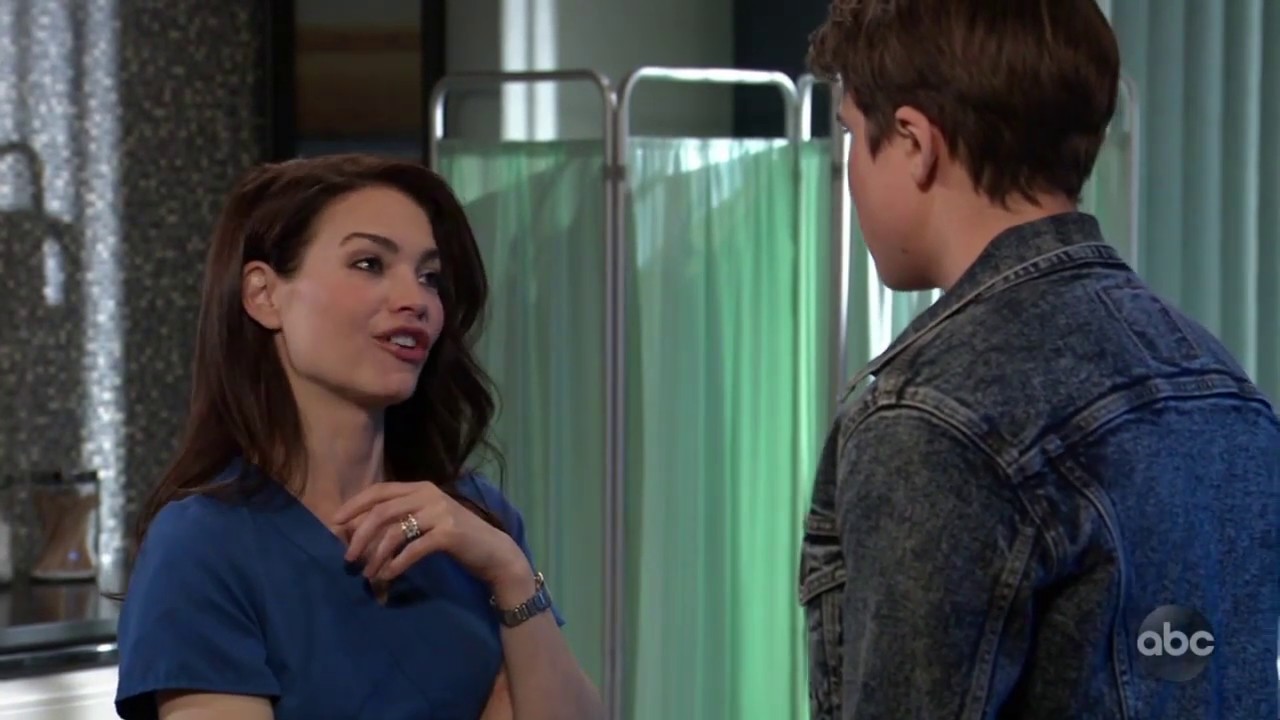 General Hospital spoilers tease that Elizabeth Baldwin (Rebecca Herbst) is desperate, desperate to get her Franco Baldwin (Roger Howarth) back and pre-2012 Andrew Cain (Steve Burton) out of his brain and her husband’s body away from Andrew’s old girlfriend Kim Nero (Tamara Braun)!

General Hospital viewers will recall that Elizabeth talked to her father-in-law and attorney, Scott Baldwin (Kin Shriner) about having Franco declared incompetent and Elizabeth getting guardianship so she could have him put in Shadybrook for safekeeping and help until Drew Cain (Billy Miller) could get Andre Maddox (Anthony Montgomery) back to Port Charles. Well, as viewers saw in Tuesday, Septebmer 4th’s episode, that didn’t quite work out the way it was meant to, with a Drew-less Andre stumbling into the emergency room of General Hospital and passing out! Nevertheless, Elizabeth will remain desperate to get Franco back to himself no matter who can help, having previously put all her eggs in one “Andre basket”!

Liesl Obrecht is also familiar with memory transfer procedures, probably having been involved with the one between Jason Morgan (Steve Burton) and Drew, since this happened during the time she was the director of a Swiss clinic that specialized in shall we say, UNUSUAL medical procedures?

This was also during the time she was involved working with Victor Cassadine (Thaao Penghlis) who had infiltrated the WSB and was the head of it, and Jerry Jacks (Sebastian Roche) and of course Cesar Faison (Anders Hove) who Liesl was still chasing after was involved in this clinic and the memory transfer and other bizarre procedures, first in Switzerland and later in the Crichton-Clark clinic, which was also where Nina Reeves (Cynthia Watros) was during part of her twenty-five year coma. She offered to help Franco but as “Frankendrew” he strongly declined, preferring to stay pre-2012 Drew Cain in his mind! Liesl even tried to literally knock some sense into his head and it didn’t work!

Getting Franco declared incompetent under the grounds of a memory transfer would be a gray area legally; there would have to be a precedent and even though Jason Morgan (Steve Burton), Drew Cain (formerly Billy Miller) – if he’s still alive – or Anna Devane (Finola Hughes) once she is back in Port Charles could talk about their experiences, memory transfer patients usually don’t remember anything of what happened to them. There is one precedent, however, that Scotty could use, and even though now there would be an understanding that it could have been the result of the memory transfer between Dr. Kevin Collins (Jon Lindstrom) and his twin, Ryan Chamberlain (Jon Lindstrom).

That was in the mid to late 1990s when Kevin thought he was Ryan and was committed to a mental institution for a short time. Those memories, if they were from a memory transfer that didn’t stick for whatever reason, would be down in Kevin’s medical records and that of the facility as a form of psychosis. Kevin will need to be in on the “diagnosis” of Franco and they may need to spin it like that to get Franco into Shadybrook. If they can get the magistrate to go along with Kevin’s experience as a precedent, then it might work until they can find someone else if necessary who knows enough about memory transfer to reverse the procedure!