The Bold And The Beautiful Spoilers: Hope And Liam’s Reconciliation Official – Ridge Stands By Thomas 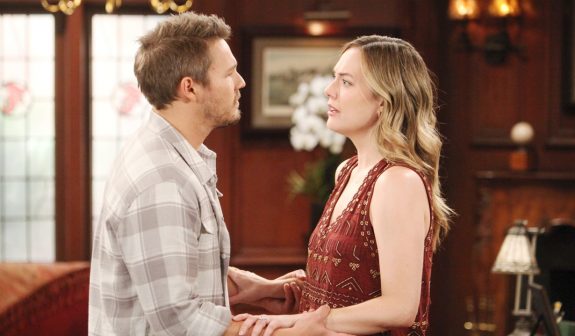 Lope’ gave up on The Bold and the Beautiful. Both Hope Forrester (Annika Noelle), who was then Hope Spencer, and Liam Spencer (Scott Clifton) resigned themselves to believing that their time as a married couple was over.

Hope initiated the annulment that legally ended her marriage to Liam earlier this year. Liam was resisting his then-wife’s request, but knew she was stubborn and had convinced herself to be with Thomas Forrester (Matthew Atkinson) so that Douglas Forrester (Henry Joseph Samiri) would have a mother figure.

B&B fans know that Hope and Liam’s renewed life together can’t be smooth, as this is the world of daytime drama. But they’re hopeful that this opportunity will be made the most of and that the writing staff allows them long-term peace of mind.

Bold And The Beautiful Spoilers– Steffy Forrester Is Resilient

Liam brought up Steffy while he and Hope were enjoying some time with Beth Spencer (Madeline Valdez and River Davidson) at the cabin. The critical role Wood’s character played in Beth’s early days won’t be forgotten.

Who’s to say what would have happened to ‘Lope’s’ daughter if Taylor Hayes (Hunter Tylo) hadn’t become close with Reese Buckingham (Wayne Brady). It’s very likely that he would have sold Beth to whoever the highest bidder was in the underground market, as he needed funds to cover his gambling debt.

Steffy’s been given some time after graciously surrendering Beth to her parents But she’ll be back on screen with her trademark resilience shortly.

One the one hand, Hope and Liam don’t want to have contact with Thomas. On the other, they need to at least be aware of his whereabouts because he’s proven to be such a danger.

Hope will be concerned about her mother if Thomas continues to live with ‘Bridge’ at Brooke Logan Forrester’s (Katherine Kelly Lang) incredibly gorgeous California estate. Now that Ridge Forrester (Thorsten Kaye) had a strong talk with his son, it appears as though he’s going to fight for Thomas to maintain his freedom.

But it’s fair to assume that Ridge’s eyes have been opened in a way they never were before. Thomas’ detailed description of Emma Barber’s (Nia Sioux) last minutes on Mulholland Drive hopefully shocked Ridge. He must ensure that his son receives strict mental health treatment and stays on a regimen indefinitely.

Sadly, it seems as though Ridge will try to cover Thomas’ crimes. That choice enables the possibility that Atkinson’s fragile character could erupt again at any time.

Miracles Enable Family Dream On Bold And The Beautiful

Hope told Liam that she should have never stopped believing in their marriage. Liam told Hope that they both thought their dream of having a family was lost. But soapy fate is often achieved even when the main players are convinced that all is lost.

The miracles in this entire arc had Beth coming to live with her aunt (Steffy) and being cared for by her father (Liam), who thought he was Phoebe Forrester’s somewhat stepfather, while her real mother, Hope, sensed an unusual connection with this little girl all along.