The Bold And The Beautiful Spoilers: Tuesday, September 10 – Steffy Rails Against Flo For Her Lies & Deception – Ridge Strikes Deal To Protect Thomas 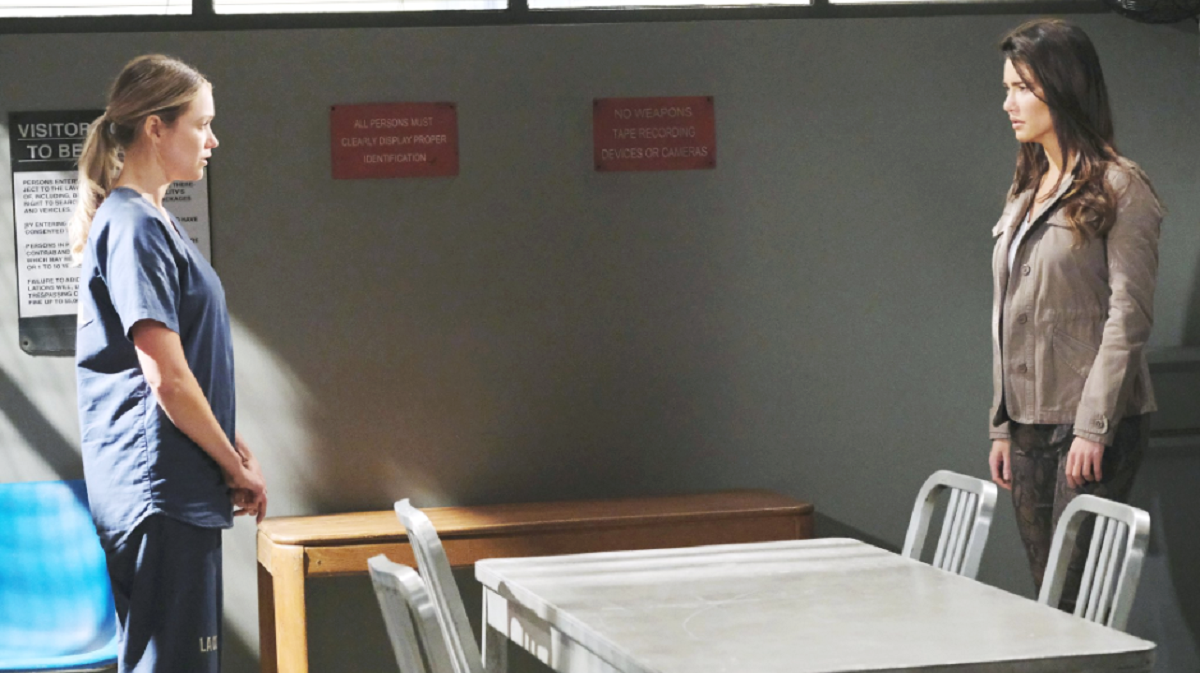 The Bold and the Beautiful (B&B) spoilers for Tuesday, September 10, tease that Steffy Forrester (Jacqueline MacInnes Wood) will be on the warpath. As B&B viewers know, Steffy just had an explosive confrontation with her brother Thomas Forrester (Matthew Atkinson). She railed against Thomas for what he did to deceive her and everyone else about Beth Spencer (River Davidson and Madeline Valdez). But on Tuesday’s episode, she’ll have a major confrontation with someone else.

According to B&B spoilers, Steffy will head to the jail where Flo Fulton (Katrina Bowden) is being held. Steffy’s been through a lot lately, with the loss of her adopted daughter from her life. She’s been trying to go on for Kelly Spencer’s (Chloe Teperman and Zoe Teperman) sake, but it’s been excruciatingly difficult. She’s tried to explain to Kelly where her sister is, and dealing with the loss of Beth has been breaking her heart.

But Steffy’s getting through it, and she’s now ready to confront Flo. She’ll appear at the jail and she and Flo will sit down for a chat. Flo may try to apologize for her actions, but she’s got a lot to apologize for. After all, she pretended to be the birth mom to Beth, whom Steffy adopted and named “Phoebe Forrester.” Steffy and Beth bonded over the course of many months, and that made it all the harder to separate once it was revealed that “Phoebe” was Beth.

On Tuesday’s B&B episode, Steffy will rage against Flo. She’ll tell Flo in no uncertain terms that she’s disgusted with her, and she’ll surely hold Flo accountable for lying to her face and doing Reese Buckingham’s (Wayne Brady) bidding. Steffy knows that had Flo just come forward when Reese first asked her to pose as the fake birth mom, then her brother Thomas never would have gotten involved.

Look for a major confrontation between Steffy and Flo, with Steffy telling Flo that she hopes she rots in jail where she belongs. It definitely doesn’t look like Steffy is going to hold back!

Meanwhile, on Tuesday’s new B&B episode, Ridge Forrester (Thorsten Kaye) will find himself in a precarious situation. As B&B viewers know, he’s just had a conversation with Detective Alex Sanchez (Jeremy Ray Valdez), during which Detective Sanchez said no charges would be filed against Thomas. That’s good news for Thomas, but Ridge also learned that charges could be dropped against Flo as well.

According to Detective Sanchez, there’s an ongoing investigation that Flo could help with since she was involved with Reese, who ended up forging documents for Beth’s adoption. The district attorney is considering offering Flo an immunity deal in return for her testimony against Reese, but they’ll need the Forrester family’s cooperation in order for the deal to go through.

On Tuesday’s B&B episode, look for Ridge to mull over whether to give Detective Sanchez the go-ahead to give Flo the immunity deal. But why would Ridge want to accept such a deal? Well, if Flo goes to trial, then a lot of details about Thomas and his involvement in Emma Barber’s (Nia Sioux) death will come out and the press will surely get hold of it. And that will make Ridge seriously consider the deal for Flo.

#Lope makes it official again and Ridge takes Thomas' side on #BoldandBeautifulhttps://t.co/HJoRb8kXKn

According to B&B spoilers, Ridge will ultimately agree to the immunity deal for Flo, and it’s something that will weigh heavily on him, He’ll know that when his family finds out about the whole thing, he’ll have to answer for it. But he’ll also want to protect Thomas, so he’ll sign off on it.