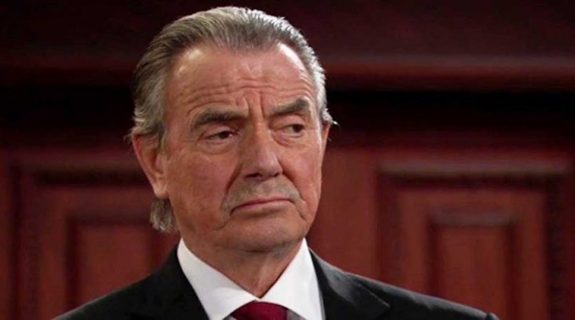 The Young and the Restless (Y&R) spoilers tease that Victor Newman (Eric Braeden) asks Nikki Newman (Melody Thomas Scott) to keep a secret from the rest of the family. It seems to point to his failing health. Victor didn’t want his loved ones to know that he is not feeling well at all.

Victor doesn’t understand why the treatment was working so well, and now he is having so many other side effects. Imagine Victor and Nikki’s surprise when he begins to feel dizzy and short of breath while drinking a coffee at Crimson Lights. At first, Nikki panics and insists they go to the hospital, but Victor refuses. He doesn’t want anyone to know that his side effects are getting worse.

Not long after his side effects worsened, they got better. And, that prompts Victor to make his wife promise to keep it a secret from everyone, especially his family. Here’s what you need to know about what’s coming up on The Young and the Restless.

Victor Newman’s Side Effects Are Increasing

Adam Newman (Mark Grossman) decided to double his dad’s dosage, which increased his side effects. Nikki cannot understand why Victor’s side effects are now so severe when they have been minimum since he started the experimental treatment.

In the corner of her eye, she sees Adam enjoying some coffee. That’s when she decides to confront him about causing problems for Victor.

The Young and the Restless spoilers say that Nikki accuses Adam of causing Victor to get sick again. She thinks that Victor’s youngest son is stressing him out, which is making his symptoms worse.

The Young and the Restless (YR) Poll: Will Billy and Vickie Survive Latest Crisis? @celebratesoaps https://t.co/JplsQykZCA

Adam Newman Is Having Second Thoughts

Nikki’s accusation worries Adam at first. He wonders if she knows he swapped the pills out. The more she talked, the more he realizes that she believes Victor’s set back is stress-related and not medical.

Y&R spoilers say that when Adam sees Victor in such a bad condition, he begins to have second thoughts. He isn’t sure if it is a good idea to continue with his plan. He realizes now that this plan could have deadly consequences for his father.

When Nikki and Victor arrive home, Dr. Nate Hastings (Sean Dominic) delivers shocking news to the Newmans. Victor makes his wife swear not to tell anyone, but soon, she will have to when Victor becomes very sick.

Do you think Adam will end up making a move to save Victor’s life? Don’t forget to come back later for more The Young and the Restless (Y&R) spoilers, news, and casting updates!