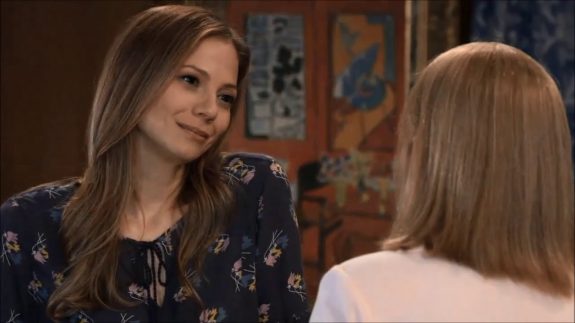 General Hospital (GH) spoilers tease that Kim Nero (Tamara Braun) was stunned when Franco Baldwin (Roger Howarth) started to put the moves on her all the sudden. She wasn’t sure what to make of it since the duo hasn’t been a “thing” for many years.

With that being said, the move has put two solid couples on shaky ground — Julian Jerome (William DeVry) and Elizabeth Baldwin (Rebecca Herbst) and Franco. Braun, the actor who plays Kim talked to Soap Opera Digest about the storyline.

Read below to find out what the GH star had to say.

Tamara Braun Was Excited About The GH Twist

The GH actress shared that she was really excited about the storyline. She said that she is a huge fan of Roger Howarth (Franco), so to get a storyline with him was very exciting for her. Not only was she excited about working with Roger, but she said that meant she would share more scenes with Herbst (Elizabeth) too.

When she saw the script for the first time, Tamara said that she was very happy. She noted that Howarth is a different type of actor. He brings a unique energy to the set and it is fascinating to watch.

As far as what’ ahead for Kim, Braun teased that her alter ego will face her own challenges. Even though she knows that Franco is not Drew Cain (Billy Miller), it is hard for her to accept when he remembers private moments from her past with Oscar Nero’s (Garren Stitt) father.

General Hospital spoilers say that what makes this even more difficult for Kim is that she has been longing for Drew to share her feelings with her. When she saw Jason Morgan (Steve Burton), thinking he was Drew, and he didn’t remember her, it was heartbreaking for her.

So for Franco, as Drew, to remember her and admit he is in love with her is a dream come true for Kim. At some point, Franco will retrieve his own memories and Kim will lose Drew all over again. The storyline will not have a happy ending for her.

Do you think Franco will recover his memories soon? What happened to Drew’s plane? Do you like Franco and Kim together? Don’t forget to come back later for more General Hospital (GH) spoilers, news, and casting updates!