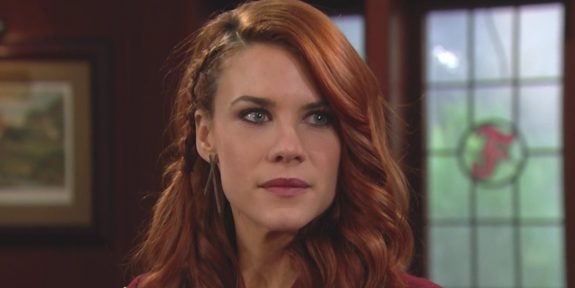 The Bold and the Beautiful (B&B) spoilers tease that Sally Forrester (Courtney Hope) will have a few choice words for Flo Fulton (Katrina Bowden) for betraying the Forrester family and Wyatt Spencer (Darin Brooks) during the week of September 9. Because of Flo, Sally lost time with Wyatt and she want to express how she feels about her in an explosive exchange.

Flo has maintained that she feels terrible for all the pain she caused. She has said that she never meant to hurt anyone. However, Wyatt couldn’t overlook the pain that Flo’s lie caused Liam Spencer (Scott Clifton), Steffy Forrester (Jacqueline MacInnes Wood), and Hope Logan (Annika Noelle).

Sally decides to confront Flo on all her lies, and it results in a massive showdown. Here’s what you need to know about what’s coming up on B&B.

There will be noticeable tension between the women as Sally shows up to confront Flo on her manipulation of Wyatt and her lying on Steffy’s illegal adoption papers. The Bold and the Beautiful spoilers say that Sally cannot believe that Flo would try to make an excuse for her actions. And, Sally thinks that Flo should either rot in jail or hightail it back to Las Vegas and never come back.

The Bold and the Beautiful spoilers state that Sally will put Flo on blast for everything she has done and how much she hurt Wyatt. Sally will add that she was right about her. She felt that there was something off about her and that she was here on some type of agenda. And, she was.

Flo Fulton Refuses To Give Up On Wyatt Spencer

Even though Wyatt has said he’s done with Flo, she cannot let go of him. She thinks they belong together, and she refuses to see that he may not be willing to forgive her. Soap Opera Digest reports that moving into the fall, Flo will continue to try to win Wyatt back.

The Bold and the Beautiful spoilers state that she will fight for his attention and she believes that he will forgive her eventually. It will lead to a love triangle between Sally, Wyatt, and Flo. The real question is who will Wyatt choose?

Look for Flo and Sally’s showdown during the week of September 9. Don’t forget to come back later for more The Bold and the Beautiful (B&B) spoilers, news, and casting news!