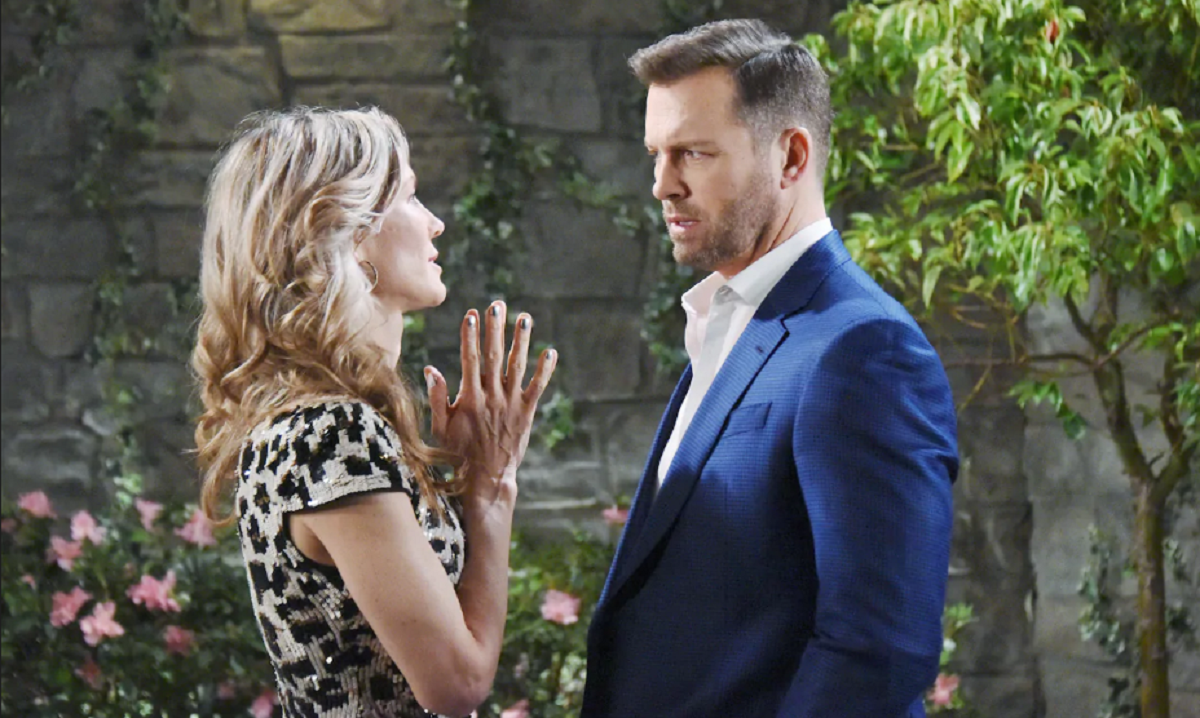 Days of Our Lives (DOOL)  spoilers for Thursday, September 12, tease that Kristen DiMera (Stacy Haiduk) will provoke Brady Black’s (Eric Martsolf) wrath. He’ll still be furious with Kristen for all the damage she caused, especially since Kristen scored her freedom. Brady will lash out since Kristen’s getting away with her crimes, but she’ll refuse to believe things are really over between them.

Kristen knows Brady doesn’t approve of her behavior, but she won’t think he can deny their intense connection. It’s true that Brady feels something for Kristen, which he’s clearly been struggling with. Brady doesn’t want to give Kristen the attention she’s craving, but there’s something about her that he’s always going to be drawn to.

That should bring some temptation for Brady in the coming weeks, especially since Kristen will scheme to win him over. Days of Our Lives spoilers say Kristen’s next nightmare will involve using Dr. Wilhelm Rolf (William Utay), but the eccentric doc is busy at the moment.

Days Of Our Lives Spoilers – Dr. Rolf Will Be Right Back At Square One

DOOL fans know Dr. Rolf signed on to help Jack Deveraux (Matthew Ashford) get his memories back, so he’ll come through for Jack on Thursday. Dr. Rolf will finish another batch of serum, but there’ll be an unexpected disaster at the lab. After the lab’s demolished, it seems the new serum samples will be shattered like the old ones.

That’ll put Dr. Rolf back at square one and lead Jack straight to Eve Donovan (Kassie DePaiva). He’ll be convinced that Eve’s out for revenge since her lawsuit will fail miserably. Eve will indeed want to destroy Jack’s shot at bliss, but it doesn’t look like this is how she’ll go about it.

There’s a good chance Dr. Henry Shah (Piter Marek) will actually be the one behind this lab setback. “Days” spoilers point to some surprising moves from Dr. Shah soon enough. He’ll pop back up on Thursday, so that should be a big hint about the sneakiness that’s going on.

Across town, Sarah Horton (Linsey Godfrey) will deal with more heartbreak. She’ll ultimately choose to reject Vivian Alamain’s (Robin Strasser) advice and put Eric’s happiness first. After Eric Brady (Greg Vaughan) admits he wants to move on with Nicole, Sarah will accept the breakup and keep her mouth shut about the pregnancy. It looked like Eric might have overheard Sarah talking to herself about her bun in the oven, but that’ll just be a fake-out.

Finally, Days of Our Lives spoilers say Sarah and Nicole will encounter each other. It’ll bring some uncomfortable moments, but Sarah will be pleased that Nicole’s alive – at least for the most part. She can’t deny that she hates losing Eric, but she knows Nicole and Holly Jonas (Harlow and Scarlett Mallory) deserve to be home.

Some fantastic scenes are ahead on the NBC soap. We’ll give you updates as other “Days” news and rumors emerge. Stick with DOOL and don’t forget to check back often for the latest Days of Our Lives (DOOL) spoilers, rumors, updates, and news.