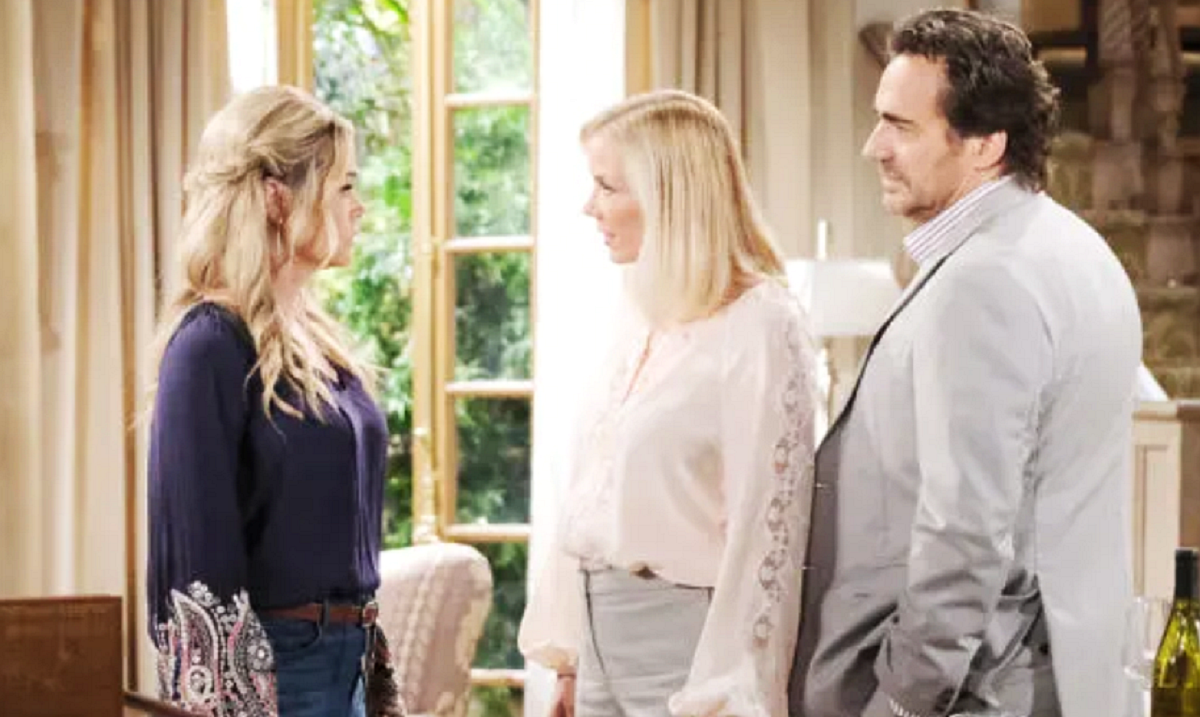 The Bold and the Beautiful (B&B) spoilers for Thursday, September 12, tease that Brooke Forrester (Katherine Kelly Lang) will have some difficult encounters. As B&B viewers know, she’s in the midst of a vicious argument with her husband Ridge Forrester (Thorsten Kaye).

Brooke is terribly upset with Ridge over the decision he made to agree to the immunity deal that Detective Alex Sanchez (Jeremy Ray Valdez) offered to let Flo Fulton (Katrina Bowden) go free. Ridge agreed to the deal on behalf of the Forrester family, and that’s got Brooke upset.

Of course, B&B viewers know that Brooke never would have agreed to such a deal had she been consulted by Ridge. But now Flo is free, and there’s nothing that Brooke can do about it. Ridge unilaterally made the decision, and Brooke was even more upset to learn why Ridge agreed to the deal for Flo…to protect Thomas Forrester (Matthew Atkinson).

On Thursday’s B&B episode, look for the epic fight between Brooke and Ridge to continue, with neither party backing down from their position. From Brooke’s perspective, she wants justice for her daughter Hope Logan (Annika Noelle), who was led to believe that her daughter Beth Spencer (River Davidson and Madeline Valdez) was dead. Hope and Liam Spencer (Scott Clifton) suffered greatly, as did Steffy Forrester (Jacqueline MacInnes Wood) when the truth came out.

Brooke wants both Flo and Thomas to pay for their crimes and the pain they caused. But Ridge thinks that Thomas has suffered enough, and he doesn’t need the bad press that would come with a trial for Flo. Flo would wind up testifying about what Thomas did, and it would be bad for him and the entire Forrester family. Of course, Brooke doesn’t care about all that – she just wants justice served.

Well, according to B&B spoilers, the argument between Brooke and Ridge will get so intense that Ridge will ultimately walk out of the mansion. He’ll decide that he’s had enough, and he just won’t be able to take his wife’s position when it comes to Thomas. He’ll promptly leave and head to Bikini bar, where he’ll start drinking and stewing about the argument.

Next, on Thursday’s new episode of B&B, Brooke’s day will go from bad to worse. She’ll be reeling from her argument with Ridge, and with Ridge’s decision to storm out of the mansion when someone will appear at her door. That person will end up being Shauna Fulton (Denise Richards), who will insist on coming in and talking to Brooke.

Of course, whether Shauna has come to see Ridge and thank him for agreeing to the plea deal for Flo, or whether her intent was to talk to Brooke remains to be seen. But since she’ll encounter Brooke, she’ll want to talk. Shauna may want to plead Flo’s case and try to convince Brooke that Flo is a good person and that she was deceived by Reese Buckingham (Wayne Brady), but it doesn’t look like Brooke is going to be in the mood to hear it.

Bold and the Beautiful POLL: Will Thomas Avoid All Legal Justice? @celebratesoaps https://t.co/LjOGOzDSnv

According to B&B spoilers, Brooke will want Shauna to leave, but it looks like Shauna will persist. So, Brooke will literally push Shauna out of the mansion, leaving Shauna frustrated and in need of a drink herself. According to ongoing B&B spoilers, she’ll head to Bikini Bar just like Ridge, and the two will eventually meet up.