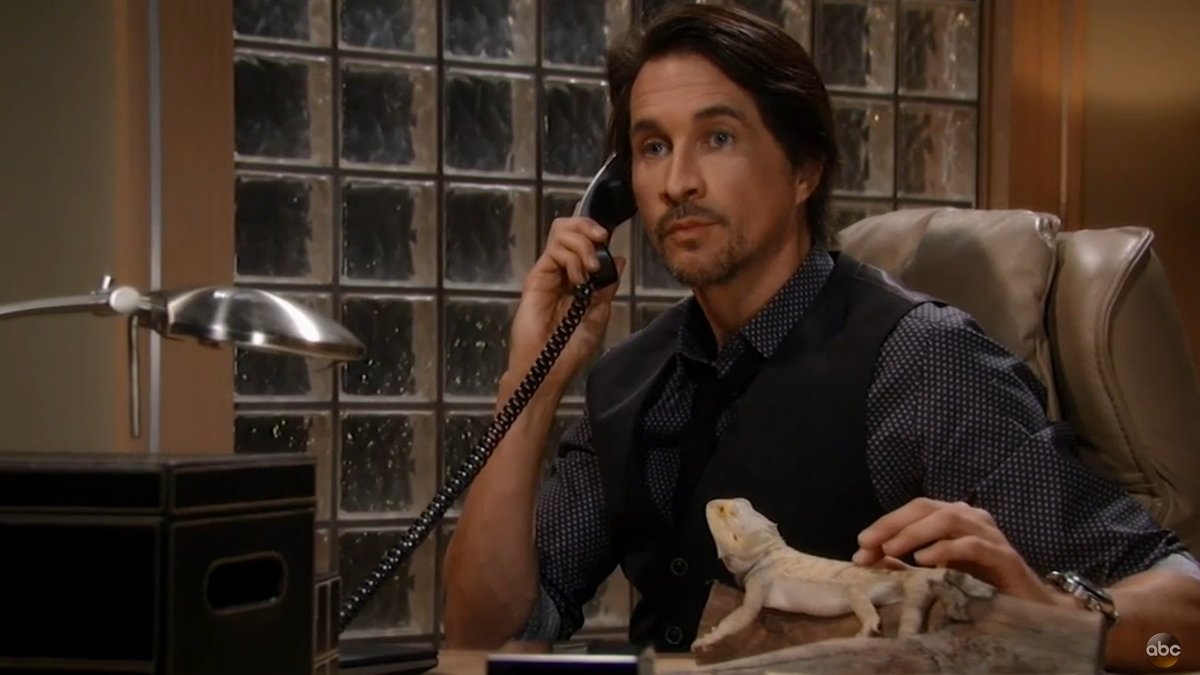 Fairman asks Michael what he thinks about the Hayden and Finn storyline, considering that so far Finn and Hayden have not had very many scenes together. Fairman wants to know if General Hospital writers will eventually come back to that story. Michael responds that it has been amazing having Rebecca back, and how beautiful and talented he thinks she is.

However, he hasn’t seen the couple being brought back together as far as he can tell from scripts he is working or what the future might hold for “Finnden”. Fairman says he doesn’t understand why GH doesn’t put the couple back together, as much as the fans loved that pairing. Michael continues that he’s taken hits from fans who loved “Finnden” that don’t understand that either. He also notes fans have said that Hayden seems more like the girl who first came to Port Charles than she does the girl who left Port Charles and hopes there will be more scenes together for the two.

GH Spoilers – What About Baby Finn?

Viewers now know that Hayden does have a toddler, a little girl. Fairman asks Michael if he thinks Finn ever suspects Baby Finn might be alive. Michael responds that he doubts it. He thinks that judging from Finn’s nature, he would not believe that Hayden would ever do that to him. He continues, Finn would be thinking, “What did I ever do to you? You would do this to me?” because he was clearly in love with her and wouldn’ t believe she would ever hurt him in that way.

Fairman then asks if Rebecca has asked Michael anything about why they don’t have more scenes together, and she had mentioned it. Michael doesn’t want to talk for her but thinks that she probably thought she’d be playing more the character who was coming back, as opposed to how she played Hayden when she first came on. Both Michael and Rebecca have been surprised at how they are seeing their relationships play out in their scripts.

Fairman then asks Michael about how Anna Devane’s (Finola Hughes) long absence, which is written in every year so Finola can take her long vacation, will affect “Fanna”. Michael joked that when someone works with him and then needs some time off, it’s like PTSD; they need a three month treatment plan to make it back, and he doesn’t blame her for taking some time off! Fairman then asks Michael what he thought about how Finn proposed to Anna.

Michael responds that the only thing that he would have done differently is to have her say no and then maybe say yes afterwards, just because he likes to play embarrassing, uncomfortable moments! He goes on to say he would have had lots of fun playing such a scenario because he’s frequently embarrassed in front of groups of people in real life, then laughs, so he was probably kidding about that! However, he goes on to say that in the moment, the proposal felt really nice, and who wouldn’t want to propose to such a lovely woman!

Fairman asks Michael if he senses any on-screen magic between Finn and Anna; he does say that he hopes they each bring each other out of their comfort zones somewhat. Michael thinks both he and Finola embrace that idea. He remarks that she and he both just go with the flow of whatever GH puts in the scripts that they are acting out, and remarks how she is such a pro and so good at it. He agrees with Fairman that Finola is a very smart actor and Fairman thinks Michael is as well.

Fairman asks Michael how it is when he gets to work with Jessica Tuck, who plays Cassandra Pierce, and if he thinks that Finn will help apprehend her. Michael thinks so, and remarks he loves Jessica and how she plays Cassandra like she is really evil and devious, as opposed to when he played Caleb Morley on Port Charles and played him like he didn’t know he was the bad guy. He looks at it as a team, and when teams lose good players, the team is no longer as good and it’s great when the good players come back.

Fairman asks Michael how he feels about Finn and his brother Detective Harrison Chase’s (Josh Swickard) relationship now, considering Finn has had such a hard time showing affection towards his younger brother. He says Finn does love his little brother and it’s easy for him to act it out because Josh is a sweet kid. He says that Josh looks at him in a scene with those big brown eyes and he thinks to himself, why is Finn being such a jerk to this sweet kid? He says Finn and Chase have slowly developed a rapport, and it will continue, but there are still a lot of contributing secrets; and that’s coming up in the show!

Fairman wants to know how Michael rates Finn compared to past characters he’s played, noting that John McBain (One Life To Live) was number one in his own book. Michael laughs at that remark and says he’s in a club with Steve Burton who also likes McBain! Michael notes he’s never sat and ranked characters he has played, but he played McBain the longest, and studied for the role by taking ride-alongs with real New York City cops for a month!

He also said OLTL had a great adviser on the show for over a year who was a former NYC detective complete with gold shield, and that someone once asked him why OLTL had just a good police department. He went on to say they really embraced their Llanview PD! He also enjoyed McBain not saying “I love you” for ten years, being on daytime and being able to do that, and remarked it was quite the accomplishment! OLTL viewers will remember that he finally told Natalie Bannon (Melissa Archer) that he loved her, but Fairman said he remembers kind of having lost it when that was shown! Michael, meanwhile said he was kind of thinking, “What did I do?!”

Fairman brought up the pairing of Michael Easton and Kelly Monaco as Caleb Morley and Livvie Locke when on Port Charles, and remarked about the amazing chemistry between them when they have been paired in storylines. Michael says he thinks “those things exist in a special place, and they probably belong in that special place”. He thought, however, that it would have been interesting to see if he had been able to continue playing McBain on GH, if it would have worked better pairing Sam McCall with him rather than Silas Clay, as GH had to change his character to because of the Prospect Park lawsuit at the time. He doesn’t think Sam would work with Finn, however.

General Hospital Spoilers – Michael Easton And One Life To Live

Fairman notes that OLTL would recently have celebrated its 51st anniversary had it not gone off the air, and that this past July he had posted photos of major characters through the years and received many “likes” and comments on social media, indicating fans want it back. Fairman asked Michael his thoughts on the subject, and Michael responded that they are such beautiful fans, even though all daytime fans are beautiful, he had a very nice connection with the OLTL fans and got to know many personally who lived in New York, where OLTL was filmed. He loved the show, and he misses it and has lifelong friends that worked with him on OLTL.

Fairman asked Michael if he and Roger Howarth were also close friends when he played Todd Manning and Michael played John McBain. Michael said he and Roger have known each other for 25-30 years, so it was before they were on OLTL. He notes (probably teasingly) that they were practically interchangeable in those days because they had done daytime and both had long hair! People would get the two mixed up! He and Roger got to know each other at a New Years Eve party in 1995 or 1996, apparently because the two had mutual friends associated with the defunct TV series “413 Hope Street” which Michael played a character in.

Michael goes on to say that now they are very close because of doing appearances together and that kind of thing. He also laughed as he noted that now they’ve both gotten over themselves a little bit now! He notes that when Roger and he started doing appearances together that it took him a while to lose his fear of engaging with large groups and the two just kind of gravitated to each other. Michael thinks they are similar types and jokes that between the two of them they become one real man instead of two halves when they’re together! Also, that they are a good crutch for each other and pick up each other’s halves!

Michael thinks that at some point Finn will get his world turned upside down when he finds out about Baby Finn and that Hayden kept the truth to him, and how he will react will be very interesting! Fairman asks Michael what he would think if Finn became an addict again; he responded that Finn struggling and then getting over it again would be interesting and so would Finn’s falling apart.

He thinks that Finn’s faith in the universe would be crushed at that point, and he’s not really sure how Finn would react; it would be a challenge to act that out! Writers would have to weave everything together with the backstory and the memories, the missing babies and he also mentions the science fiction and the twins, obviously talking about the memory transfers and Anna and Alex, but at the heart of it, he says it should really be about two people finding themselves in love.

Fairman asks if Michael is still working on graphic novels and movies, and he replies he’s always doing something, because it keeps him balanced and from losing his mind! He also mentions doing more movies with Trevor St. John, who he made the short “Ultraviolent” with a few years ago, and that there may be more projects ahead for the two.