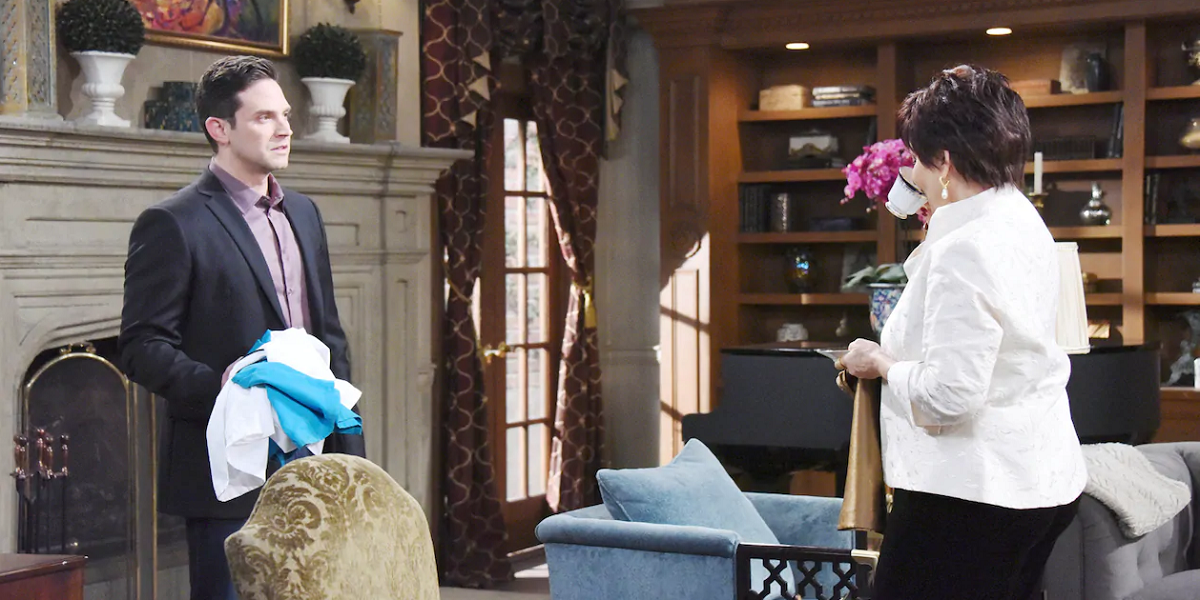 Days of Our Lives (DOOL) spoilers tease that there are five key takeaways for viewers to watch for this week.

First, there is Jennifer Horton’s (Melissa Reeves) kidnapping. At first, Eve Donovan Deveraux (Kassie DePaiva) may be suspected by JJ Deveraux (Casey Moss) and Jack Deveraux (Matthew Ashford) in Jennifer’s disappearance. After all, she was the first suspect to come to mind in the trashing of Dr. Wilhelm Rolf’s (William Utay) lab that Jennifer had set up at Salem University Hospital.

But Eve will be ruled out, and for once she didn’t do what she probably has been thinking of doing herself. JJ and Jack will grow increasingly worried about Jennifer. Meanwhile, Jennifer is held against her will by the unlikely perpetrator Dr. Henry Shah (Piter Marek), who has snapped. Jennifer will try to make contact with Jack after being able to wiggle one of her hands out of her restraints and key a text to Jack before Shah returns to the hotel room where he is holding her hostage.

Second, there is Kate Roberts’ (Lauren Koslow) attempted murder by Vivian Alamain (Robin Strasser). Upon hearing that Kate was still alive in spite of Vivian’s shooting and burying her, Vivian disguises herself as Dr. D. Cramer and gets into Salem University Hospital and into Kate’s room. She tries to smother her with pillows. Her son, Stefan DiMera (Brandon Barash) had confiscated her gun after she told him about the shooting and burial in last week’s show.

Kate’s condition will deteriorate and although Vivian fails to kill her again, she does slip into a coma and Lucas Horton (Bryan Datillo) will receive upsetting news. Meanwhile, Lucas’ son Will Horton (Chandler Massey) decides to do some detective work to prove he and Sonny Kiriakis’ (Freddie Smith) theory that Vivian is Kate’s attempted murderer, by eavesdropping on Vivian and Stefan.

Third, Sarah Horton’s (Linsey Godfrey) pregnancy dilemma continues, as her baby’s presumed father, Eric Brady (Greg Vaughan) makes love with his soulmate, Nicole Walker (Adrienne Zucker). Meanwhile, Sarah is touched by her new friend Xander Cook’s (Paul Telfer) devotion to her. Sarah will make a decision about what to do about her pregnancy by the end of the week.

Fourth, Jordan Ridgeway (Chrishell Hartley) will be released from Bayview this week and return to Salem. Rafe Hernandez (Galen Gering) will eagerly await news about Baby David Ridgeway (Jaxton and Dexter Ellis) who he has been caring for since Jordan was committed. However, Jordan’s brother Ben Weston (Robert Scott Wilson) and his girlfriend Ciara Brady (Victoria Konefal), who Jordan tried to kill, will be shocked when they discover that Jordan has been released.

Fifth, the obsessed Kristen DiMera will continue attempts to win Brady Black (Eric Martsolf) back, as she will try to impress him with her good deeds! Meanwhile, Brady will make a confession to his father John Black (Drake Hogestyn) and Anna DiMera (Leann Hunley) pleads with Kristen to tell the truth and help Tony DiMera (Thaao Penghlis) win his freedom.

Tony is in jail for murdering Ted Laurent (Gilles Marini) and Kristen knows it was self-defense when Tony tried to get a gun away from Ted when Ted tried to shoot Kristen and it went off. Kristen even thinks she has a say in what Sarah does about her pregnancy, as she presses Xander for information about it. Kristen may have some bizarre plans of her own for that embryo!

That’s all for this week’s Five Key Takeaways from Days of Our Lives. Stay tuned to the show and keep checking DOOL spoilers frequently for all the latest news, updates and developments!