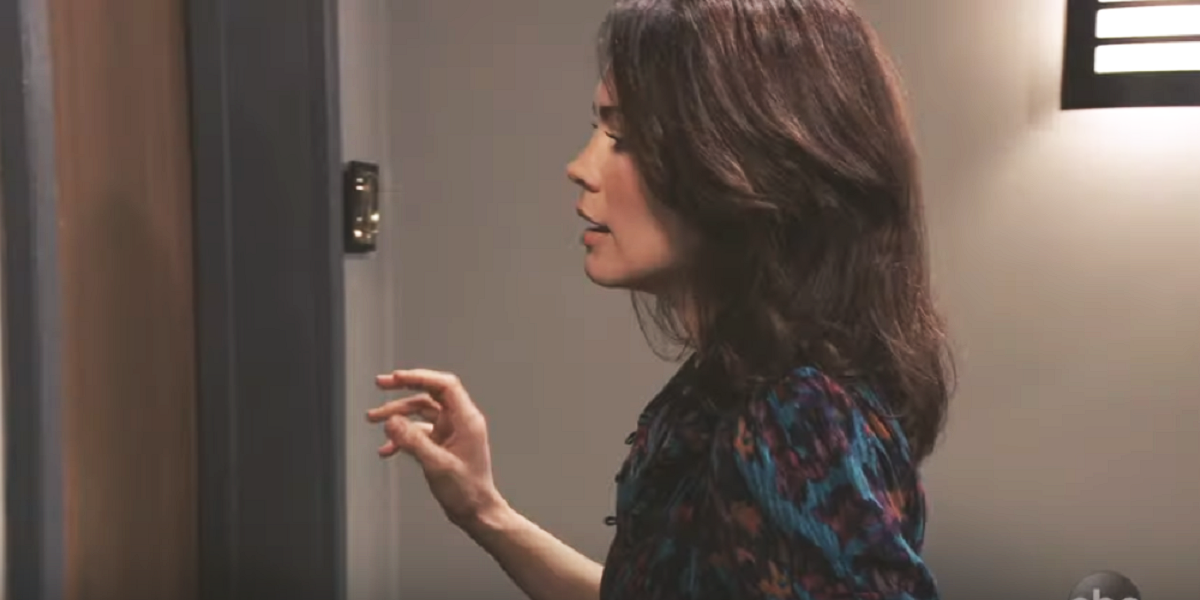 General Hospital (GH) spoilers for Tuesday, September 17, tease that Brad Cooper (Parry Shen) will hope he can put Liesl Obrecht (Kathleen Gati) in the rearview mirror. He’ll seek assurance from Julian Jerome (William deVry) that it’s over, but Julian won’t look so sure. Perhaps whatever Julian was doing under the hood wasn’t completed after all.

Whether Julian bailed on his plan at the last second or simply botched the job, Liesl will live another day. General Hospital spoilers say Dr. O will be just fine as she taunts Valentin over his predicament. She’ll be thoroughly amused with the jam Sasha Gilmore (Sofia Mattsson) has put him in.

It doesn’t sound like Liesl will be too concerned about Michael Corinthos (Chad Duell). She may expect Michael to keep his mouth shut for Nina Reeves’ (Cynthia Watros) sake. Valentin may hope for that as well, but he’ll still have concerns about Sasha. They’ll get into a heated argument as Valentin warns Sasha about what’s at stake.

Sasha will yell that Valentin should mind his own business and stay out of hers. She’ll be tired of feeling guilty and even more tired of feeling controlled by Valentin. After Nina interrupts, she’ll wonder what she missed. It won’t take long for Nina to pick up on the tension in the room, but Sasha and Valentin may cover for now.

Other General Hospital spoilers say Willow Tait (Katelyn MacMullen) will fret over Michael. She’ll find him looking glum at GH, so she’ll ask if he’s OK. Michael may not want to divulge details, but he could at least admit there’s trouble in paradise. He might allude to his tricky situation with Sasha and wonder what’s next.

Michael may also beat himself up for constantly choosing dishonest women, but Willow may remind him that he sees the good in people. That can make Michael a bit too trusting at times, but it’s also why he’s one of the sweetest guys around town.

Over with Harrison Chase (Josh Swickard), he’ll declare there’s something Elizabeth Baldwin (Rebecca Herbst) should know. Chase will mention that he took off Franco Baldwin’s (Roger Howarth) ankle monitor – and he’ll add that he did it at Kim Nero’s (Tamara Braun) place. That’ll give Liz the heartbreaking opportunity to witness some steaminess.

Kim will decide to sleep with Franco just before Liz arrives. Will Liz walk in on them doing the deed? GH fans will be anxious to see the fallout of Franco and Kim’s sizzling hookup. Meanwhile, Hamilton Finn (Michael Easton) will pay Andre Maddox (Anthony Montgomery) a visit. He’ll ask if Andre can reverse the effects of Franco’s memory procedure, but there are certainly no guarantees.

Andre may bring Finn up to speed on the four possible outcomes. He told Liz that there’s a chance the memory reversal will work, but there’s also a chance there’ll be no change at all. Franco could also end up in a vegetative state or have his Drew memories become more intense. All of this is very experimental and dangerous, so Andre doesn’t quite know what to expect.

Finally, Curtis Ashford (Donnell Turner) and Laura Webber (Genie Francis) will face Cassandra Pierce’s (Jessica Tuck) gun. She’ll emerge from a closet on The Haunted Star and point her weapon at them. Curtis will push Cassandra to join forces with them and reveal what she knows. He’ll think they can be on the same team against Valentin, but Cassandra will remain wary.

General Hospital spoilers say Curtis and Laura will eventually get the gun away from Cassandra, so they’ll manage to turn the tables! We’ll give you updates as other GH news and rumors emerge.

Stick with the ABC soap and don’t forget to check back often for the latest General Hospital (GH) spoilers, rumors, updates, and news.