The Young And The Restless Spoilers For Tuesday, Sept. 17: Billy’s Aggressive War with Dark Side – Visitors In His Mind Bring Battles 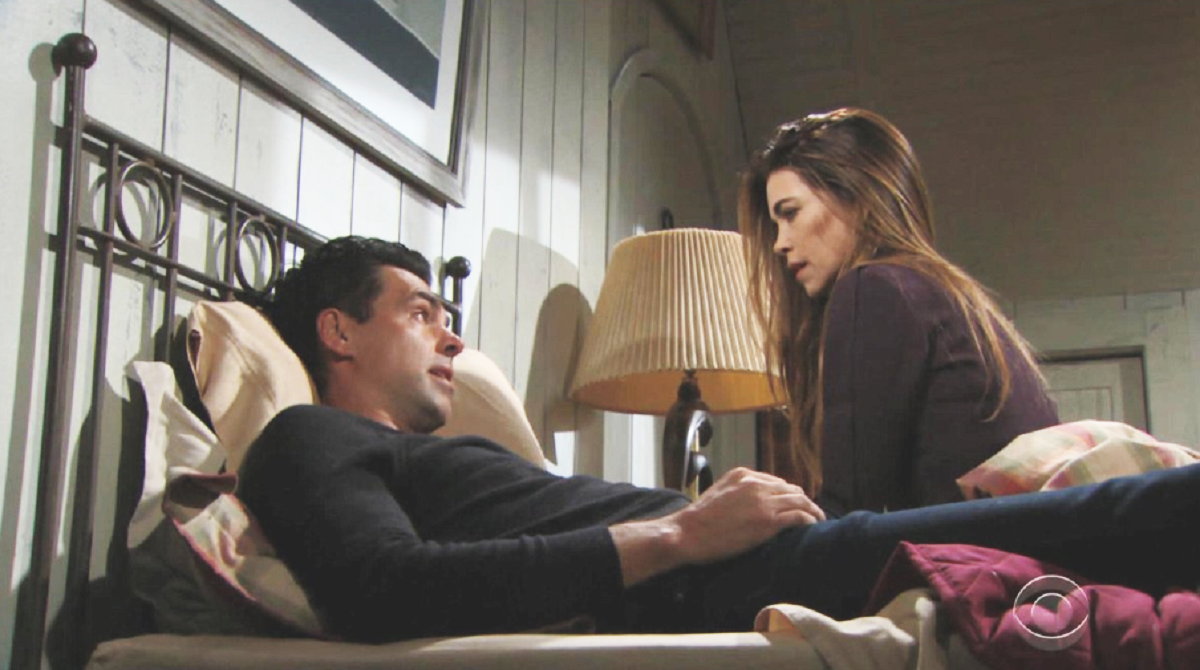 The Young and the Restless (Y&R) spoilers for Tuesday, September 17, tease that Billy Abbott’s (Jason Thompson) internal battle will get ugly. At the boathouse, Billy opens up to Victoria Newman (Amelia Heinle). He’s accepted that he summoned Adam Newman (Mark Grossman) to route 7 and tried to kill him. Billy understands that he has to get rid of this dark person within him. He just isn’t sure he can make him go away.

After Victoria offers reassurance and goes out for food, Billy wrestles with his inner demons. A fantasy version of Delia Abbott appears, so Billy speaks to this young woman before him. Delia doesn’t blame Billy for going after Adam years ago, but she feels his latest revenge mission undid all his hard work. She suggests that if Billy could do that after all this time, maybe that’s just who he is.

Billy insists he wants to get rid of the darkness, but his fantasy world brings more drama. Jack Abbott (Peter Bergman) shows up in Billy’s mind and rips into him for being a screw-up. He feels like Billy can’t fix the mess he’s made. Jack rants about Billy taking a torch to his life because of how much he hates Adam. He eventually urges Billy to decide whether he wants to be a good guy or a slacker and be done with it.

Jill Abbott’s (Jess Walton) next in Billy’s mind battle. She thinks it’d be best for Billy to just disappear and argues that Victoria doesn’t deserve this. Billy wants Victoria as his rock, but Jill feels like he needs to handle things alone. When Billy insists there’s no point without Victoria, Phyllis Summers (Michelle Stafford) arrives and notes that she might throw up. She points out that she likes the edgier side of Billy, and he acknowledges that he’s on the verge of losing it.

Phyllis counters that maybe it’s already too late. She reminds Billy that he hooked up with Summer Newman (Hunter King) for revenge and warns that he’s incapable of love. They sit down at the poker table to play as Phyllis explains the high stakes. Winning means conquering his grief and getting the life he wants with Victoria. Losing means accepting that the war is over and he’s a lost cause.

The Young And The Restless Spoilers: Tuesday, September 17 – Billy Struggles To Overcome His Alter’s Control In A Standalone Episode https://t.co/rl2h14irxZ pic.twitter.com/AJvxuTQshG

Phyllis laughs after she beats Billy at cards, which leaves him in more turmoil. Soon after, it’s Adam’s turn to appear in this imaginary battle zone. He gripes about Billy going after him and points out that they already worked through all this. Adam wants to know what’s going on in Billy’s head. He mentions Connor Newman (Judah Mackey) and wonders why Billy didn’t target him, too.

Billy insists he isn’t a monster, but Adam doesn’t think he’s one either. Nevertheless, this imaginary version of Adam refuses to keep looking over his shoulder. He tries to strangle Billy until he turns into Billy’s alter. Billy’s forced to fight himself off just as Victoria returns. After Billy delivers a hard punch, he snaps back to reality and tells Victoria he doesn’t want that part of himself to come back.

Billy now sees the potential to move on and make it to the other side. He hugs Victoria as he processes his new perspective. The Young and the Restless spoilers say some gripping drama’s ahead on the CBS soap. We’ll give you updates as other Y&R news and rumors emerge. Stay tuned to see what’s else is brewing in Genoa City.