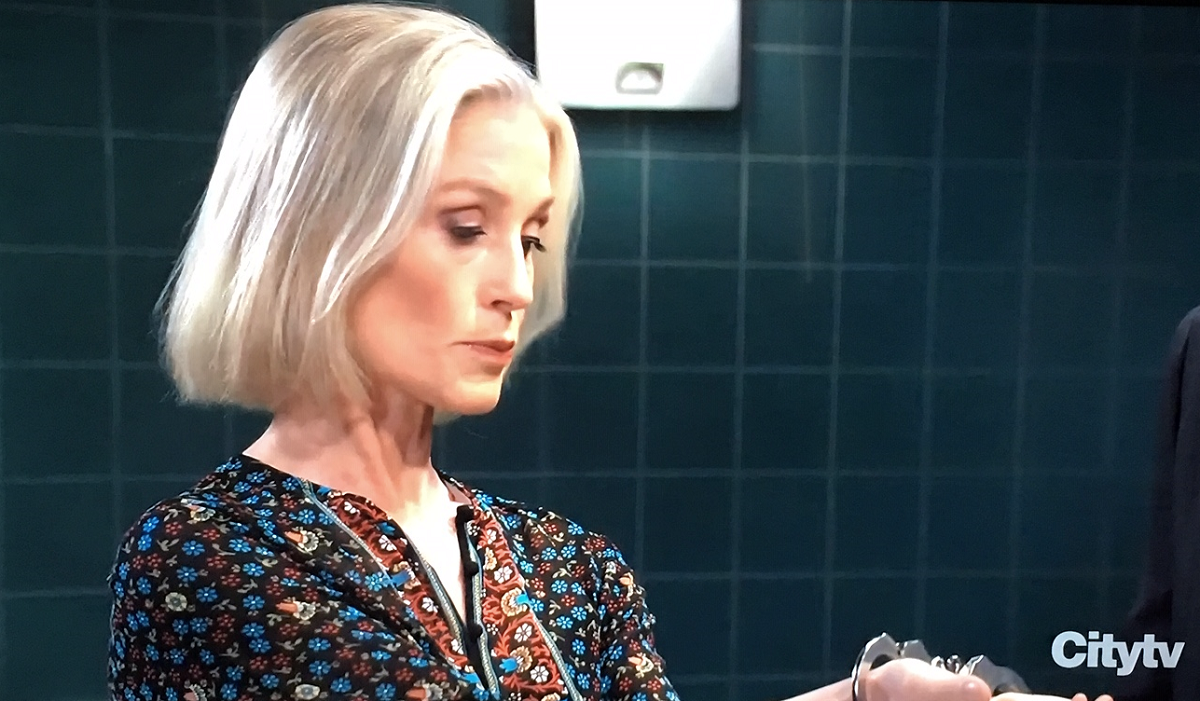 General Hospital (GH) spoilers say that  Curtis Ashford (Donnell Turner) finds a scarf on the Haunted Starr. Laura Webber (Genie Frances) says someone else must have been on the boat. Curtis opens the closet door and finds Cassandra Pierce (Jessica Tuck) pointing a gun at him.

General Hospital’s Harrison Chase (Josh Swickard) asks Michael Corinthos (Chad Duell) if he can help. Michael assures Chase there is nothing he can do. Willow Tait (Katelyn MacMullen) arrives. Willow talks to Michael about what is going on with him. Willow tells Michael that Brad and Lucas almost lost the baby because of her lies. Willow says lying to cover up a mistake is different than lying for other reason. Michael needs to consider what is on the inside.

Valentin wants to know if Sasha told Michael the truth. Valentin and Sasha are in an intense discussion when Nina arrives. Michael arrives to apologize to Sasha. Nina and Valentin go downstairs for a drink. Nina wants Liesl to give her away at the wedding. Nina wants her wedding to be perfect. Valentin says Nina will have the happy ending she deserves no matter what it takes. Liesl toasts to the family as Cassandra calls Valentin.

Michael arrives to apologize to Sasha. Michael explains to Sasha that he was comparing her to Nelle Benson (Chloe Lanier). He tells Sasha she wasn’t trying to hurt anyone. Sasha says she doesn’t get a pass on this. Michael tells Sasha this does not make her a monster, he knows the difference. Sasha feels bad about lying to Nina. Sasha says Nina loves her and she loves Nina too. Michael has to hand it to Valentin for picking her. Sasha thanks Michael for his assessment of the situation. Sasha plans to tell Nina the truth. Michael agrees that Nina deserves the truth but maybe Sasha should wait.

General Hospital’s Hamilton Finn (Michael Easton) says Andre Maddox (Anthony Montgomery) is doing well. Liz Baldwin (Rebecca Herbst) arrives and asks Finn to listen to the possible outcomes. Liz says she knows what Franco Baldwin (Roger Howarth) would want. Liz says that Franco would want her to fight for him. Andre asks if Franco has agreed to this procedure. Liz tells Andre to leave it to her.

She runs into Chase in the hallway. Chase needs to tell Liz something about Franco. Chase tells Liz the monitor is off and Franco is at Kim’s apartment. Andre needs Franco’s medical records, Finn promises to get them. Finn and Willow speak to Wyatt Hoover (Patrick J. Gibbons) in the hallway. Finn calls Wyatt a hero, he disagrees. Willow and Wyatt discuss playing instruments. Wyatt wants to have a concert. Willow gets a job offer from the hospital. Finn congratulates Willow.

General Hospital’s Julian Jerome (William DeVry) tells Brad Cooper (Parry Shen) that he did what he needed to do. Julian pulls Brad into a room and tells him they don’t want the whole hospital to hear what is going on. Julian tells Brad that he couldn’t kill Liesl Obrecht (Kathleen Gati).

Brad tells Julian he is going to cause them to lose Wiley. Brad tells Julian that Sonny will kill him anyway because he will blame him. Julian wants to know how many more people Brad will be ok with killing to keep this secret. Julian says Brad made this mess and he needs to fix it. Brad continues to push Julian. Julian tells Brad to make Liesl happy, they have too much to lose.

General Hospital’s Kim Nero (Tamara Braun) tells Franco that she can’t say goodbye to Drew again. Kim and Franco begin kissing and close the door. Kim and Franco make love. Kim asks if this really happened. Franco says he isn’t Franco and didn’t make Liz any promises. Kim made promises to Julian and he loves her. Julian is leaving everything for her.

Franco says he and Kim have had this connection for a long time. Franco tells Kim they won. Franco plans to leave town and asks Kim to go with him. He needs to make a clean break and if Kim follows her heart nothing will stop them. Kim and Franco kiss as Liz arrives outside the door.

As always, more detailed spoilers and a full collection of pictures for the week in question will appear here on Soap Opera Spy, when there could be more clues and hints over exactly what’s going on. General Hospital airs weekdays on the ABC network. Read more news, spoilers, and gossip on our GH homepage.