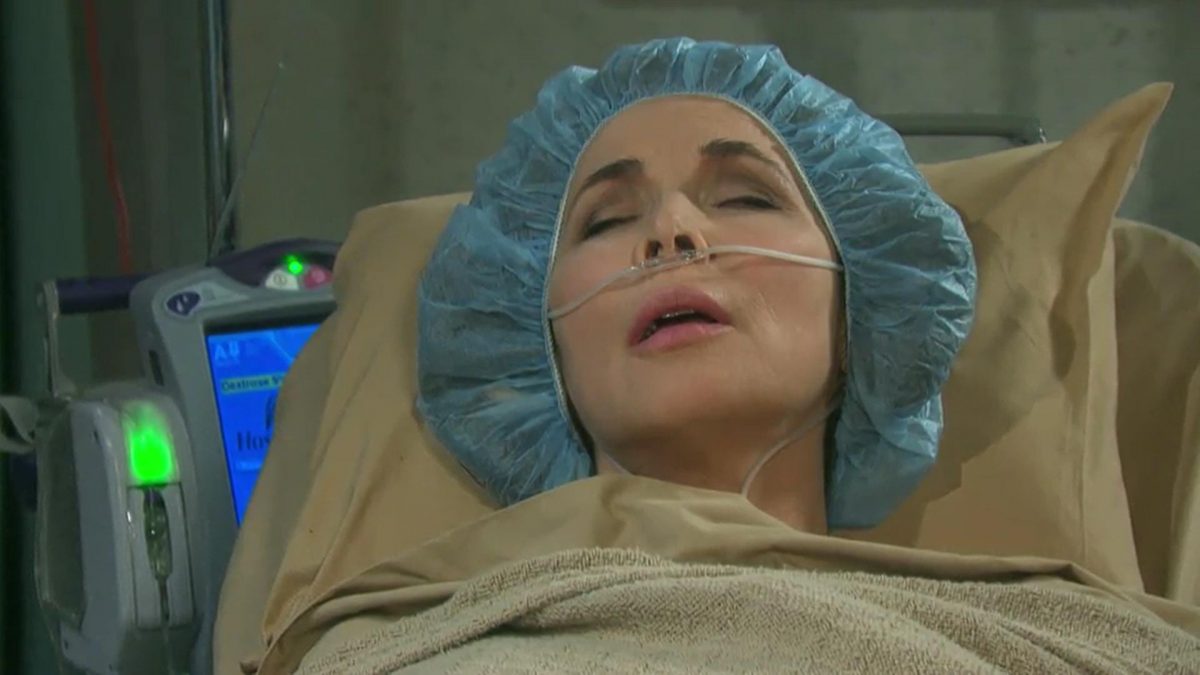 Days of Our Lives spoilers tease that a last minute miracle might save both Julie Williams (Susan Seaforth Hayes) and Kate Roberts DiMera (Lauren Koslow). Julie needs a heart transplant she’s too old for unless someone donates a heart to her, and Kate is brain dead and there is no current option for a brain transplant!

Days of Our Lives viewers know that this is a long shot, but if Dr. Wilhelm Rolf (William Utay) can raise people from the dead via a “resurrection serum”, what about just one organ in someone? Could he modify his serum to regenerate a new heart or a new brain for someone who will surely die without them? Surely if his serum can raise the whole person from the dead, it can be modified to regenerate vital organs that sustain life in a person such as a heart or a brain! This seems to be the most likely prediction of how both Julie and Kate could be saved, should neurologists determine that there is no hope for Kate’s brain to come to life on its own. The question is, will he do it?

DOOL Rumors – Dr. Wilhelm Rolf Does Like A Challenge!

Rolf does like a challenge, even though he may get a little frustrated and exhausted at times when things don’t go his way, as when his lab in Salem University Hospital was trashed. But he is very proud and very invested in his work albeit some of his creations are rather strange. However, even if he is unorthodox and maybe truly a “mad scientist” he has restored life and memory to people, and even those masks like Kristen DiMera (Stacy Haiduk) used to impersonate Nicole Walker (Adrienne Zucker) could be a miracle for someone permanently disfigured in a fire as opposed to sometimes years of plastic surgeries and skin grafts! So if asked to make a new heart for Julie or a new brain for Kate, or serums that will regenerate them good as new, he most likely will be up for the challenge!

Days of Our Lives Rumors – Stranger Things Have Happened On Days Of Our Lives, And Surely Will Happen Again!

Longtime Days of Our Lives viewers will recall that many Salemites were killed during the Salem Stalker storyline, including Julie’s husband Doug Williams (Bill Hayes)! Marlena Evans (Deidre Hall) was thought to be the killer, but then she herself was killed; it turned out to be Andre DiMera (Thaao Penghlis) but all were found on an island alive, called “Melaswen” which is “New Salem” spelled backwards. Also, upcoming is what is believed to be a “time jump” in which all storylines and characters will jump forward a year; that could allow for Julie to receive a heart from a deceased Salemite and Kate to have miraculously resuscitated, with or without the help of Rolf. Current spoilers indicate Lucas Horton (Bryan Datillo) will offer Kate’s heart to save Julie, but things could change after the offer is made!

Days of Our Lives #DOOL Spoilers And Recap Tuesday, September 17 – Jordan Is Back; Eli Issues A Warning @celebratesoaps https://t.co/vX9je7zBtP

The next two to three weeks will tell the tale of whether Kate and Julie are saved by Rolf’s resurrection serum, a miraculous time jump, or by some other method! Bill and Susan Seaforth Hayes have verified all the “Julie sightings” for the next several months on their Twitter account on August 23 2019, and she’s going to be on through at least April 23 2020 so we know she will be healed somehow! Lauren Koslow still has “Actress, Days of Our Lives” on her Twitter account too, so unless writers decide to give her a clone or an evil twin, she’s not going anywhere either!