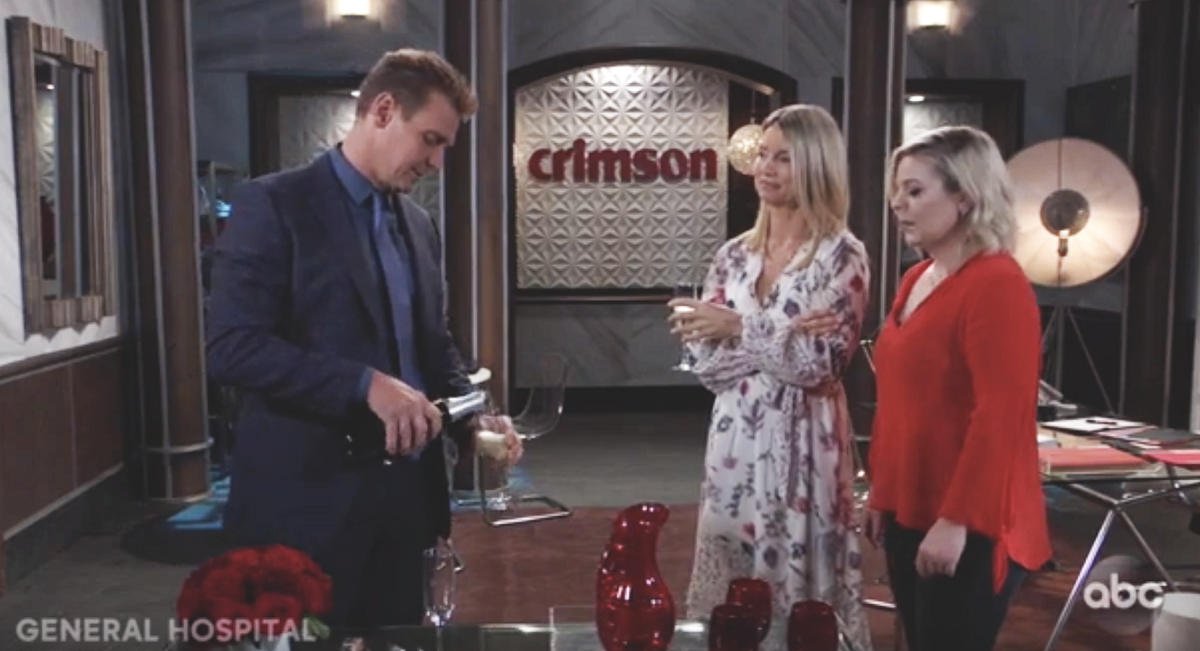 General Hospital (GH) spoilers tease that with Drew (Billy Miller) presumed dead, someone will have to take his spot as CEO of Aurora Media. Will that person be Sam (Kelly Monaco) or will someone else fill the position?

Jax (Ingo Rademacher) has already suggested to Sam that she take the position.  But it was too soon after Drew’s disappearance for Sam to even consider such a thing.  But a bit of time has passed and Drew is still nowhere to be found. Sam may not necessarily want to give up her life as a PI, but she and Drew bought Aurora Media to give their daughter Scout a future.

When Sam and Drew split up, Sam left Aurora Media to return to her life as a Private Investigator.  She started investigating the Dawn of Day cult and she almost died after being put in a freezer by vengeful cult leader Shiloh (Coby Ryan MacLaughlin).

The whole situation was very dangerous for Sam and now that Drew is gone, Sam may look for safer employment to maintain a stable home life for her children.  Returning to Aurora would be the perfect way to do that, while also protecting the company Drew built to build a future. But in her heart, Sam is an adventure junkie!

Sam’s relationship with Jason (Steve Burton) is completely different than what she had with Drew, even though when she was with Drew, everyone thought he was actually Jason/  While Drew opted for a safer route, Jason leads a very different life.

As Sonny’s (Maurice Bernard) enforcer, Jason is always involved in one dangerous situation or another, and usually Sam is right there next to him!  She might argue that the best way to move forward in a world without Drew would be to stay true to who she is.  But if Sam doesn’t take the position, might Jax just take over the whole company himself?

Currently Jax is the CEO of the Print Division of Aurora, with the rest of the company was still with Drew.  Drew ran the whole company himself until her sold half to Jax so it wouldn’t be that difficult for Jax to simply reintegrate both haves under his leadership.

He has a lot of experience with running companies so it shouldn’t be any problem for him to do the same with Aurora.  Sam would know the company is in good hands with Jax and let him do what he does best, until Scout comes of age. However, there is one other person that would might be a long shot but lately has shown some interest in taking a much larger role in the company.

Maxie may seem like a strange choice, given that she doesn’t have any experience in a position like this. But others have recently noticed how great Maxie is with the business side of Crimson Magazine.  Jax recently called Maxie the heart of Crimson and Hayden (Rebecca Budig) even complimented Maxie on her business savvy.  Maxie has been absorbing everything she has learned since she started working on Crimson all those years ago with Kate Howard.

Jax could easily take Maxie under his wing and teach her even more while she gets her degree.  Sam and Maxie are great friends and with Jax right there with her, Sam might agree that Maxie would do more than a good job!

Maxie’s heart has always been in fashion though so would she even consider such a thing?  For many viewers, seeing Maxie go from being an intern to running a company would be the next logical step.  This would be an out there choice for the soap, but perhaps no stranger than Robert Scorpio (Tristan Rogers) suddenly having a secret law degree and becoming the District Attorney!

Will Sam come back to Aurora?  Will Jax just run the whole thing?  Or could Maxie finally spread her wings and help out?  And even though there hasn’t been any word of a recast for Drew, it’s still possible he could come back!  The leadership at Aurora is definitely in flux, so anything could happen!  Every day in Port Charles brings surprises and excitement, so stay tuned to General Hospital weekdays on ABC and find out!