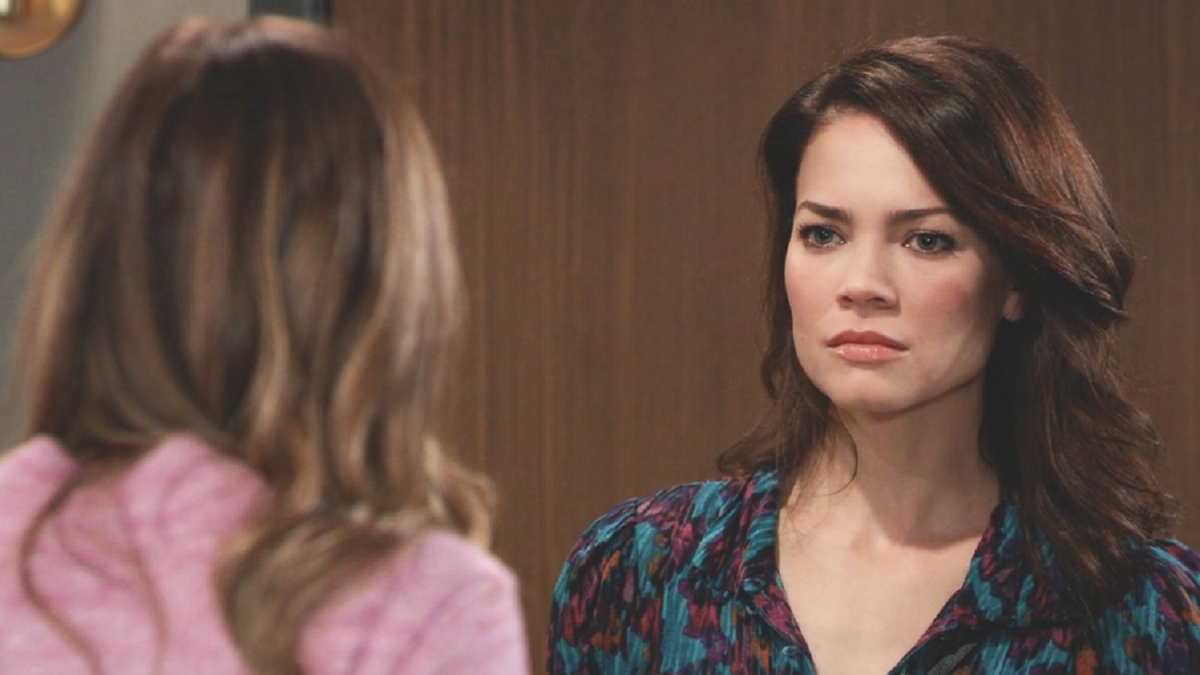 Kim didn’t implant the memories and set this in motion. Kim tells Liz that Franco is gone just like Oscar Nero (Garren Stitt) and she can’t get him back. Liz tells Kim to watch her. Liz says Franco will get his memories back and come back to her. Kim tells Liz this is untried. Kim tells Liz these procedures usually fail. Kim says Drew has a right to make his own choice.

Liz says Kim is the reason that Franco doesn’t want to have this procedure. Liz brings up Julian Jerome (William DeVry). Liz says Franco will never be Drew. Kim tells Liz to leave. Kim calls Julian and leaves a message. Kim starts to write Julian a letter as Liz calls Scott Baldwin (Kin Shriner). Franco goes to the pier, Kim joins him. Kim asks where they are going. Franco doesn’t care where they go as long as they are together. Franco is grabbed by medical staff. Liz tells Kim she gave her no choice.

General Hospital’s Jocelyn Jacks (Eden McCoy) skips volleyball. Jocelyn tells Cameron Webber (William Lipton) that volleyball is all she can think about. Jocelyn believes she should be thinking about Oscar instead. Jocelyn says this doesn’t feel right. Jocelyn doesn’t want to leave Oscar behind. Cameron thinks that is the point of moving on.

Jocelyn wants to know what is going on with Cameron. Cameron hates part of this because of what it is doing to his mom and brothers. Cameron says Franco made their house a home and that guy is gone. Jocelyn tries to tell Cameron that this isn’t his fault. Jocelyn complains that no one has come to take their order. Dustin Phillips (Mark Lawson) is grading papers and calls to Jocelyn as she places an order. Dustin tells Jocelyn she left him wanting more. Dustin believes Jocelyn can go deeper. Dustin smiles and leaves.

General Hospital’s Franco approaches Cameron and wants to talk. Franco tries to convince Cameron that he’s not giving up being Drew to become Franco. Cameron wants to talk to Franco before he leaves. Cameron says he owes Franco a lot and just needed him to know that. Franco and Cameron say their goodbyes. Cameron is upset when Jocelyn comes back outside. Cameron tells Jocelyn that Franco is gone.

Sonny asks if Jason thinks Shiloh is trying to get Sam to back off. Jason tells Sonny that Peter didn’t pick up. Sonny questions what Jason thinks of Peter. Sonny asks Jason what he thinks Peter’s connection to Shiloh is. Jason asks about Carly Corinthos. Sonny tells Jason that Carly thinks Dev Corbin (Aston Arbab) is making things harder on Jocelyn. Jason thinks Dev can be helped in other ways.

General Hospital’s Peter meets the hit-man on the docks. The hit-man thinks Peter should have told him about Andre’s skills. Peter goes to visit Shiloh. Shiloh tells Peter that he called Jason when Jason calls Peter’s phone. Shiloh put Peter on Jason’s radar, his trial starts tomorrow and he needs action.

Shiloh continues to threaten Peter who points out that implicating him, is implicating himself. Shiloh tells Peter that he knows everything that has happened. Peter has everything to lose. Shiloh has nothing to lose. Peter is going to put a plan in place to help Shiloh escape. Shiloh threatens Peter again who rushes out to make plans. Peter calls the hit-man back to get rid of Shiloh.

Will Port Charles forgive Brad for helping Nelle with the baby swap on #GeneralHospital? #GHhttps://t.co/OtbAGVhNab

Lulu admits that she and Dustin enjoyed themselves. Lulu tells Maxie that Laura Webber (Genie Frances) and Curtis Ashford (Donnell Turner) walked in on them. Lulu says this is payback. Lulu asks what is wrong with her. Maxie is happy for Lulu but doesn’t want this to keep her in rebound city. Jason and Sonny approach Lulu and Maxie.

As always, more detailed spoilers will appear here on Soap Opera Spy, when there could be more clues and hints over exactly what’s going on. General Hospital airs weekdays on the ABC network. Read more news, spoilers, and gossip on our General Hospital homepage