The Bold And The Beautiful Spoilers: Thursday, September 19 – Flo Declares Her Love For Wyatt – Shauna Begs Quinn To Help Get Rid Of Sally 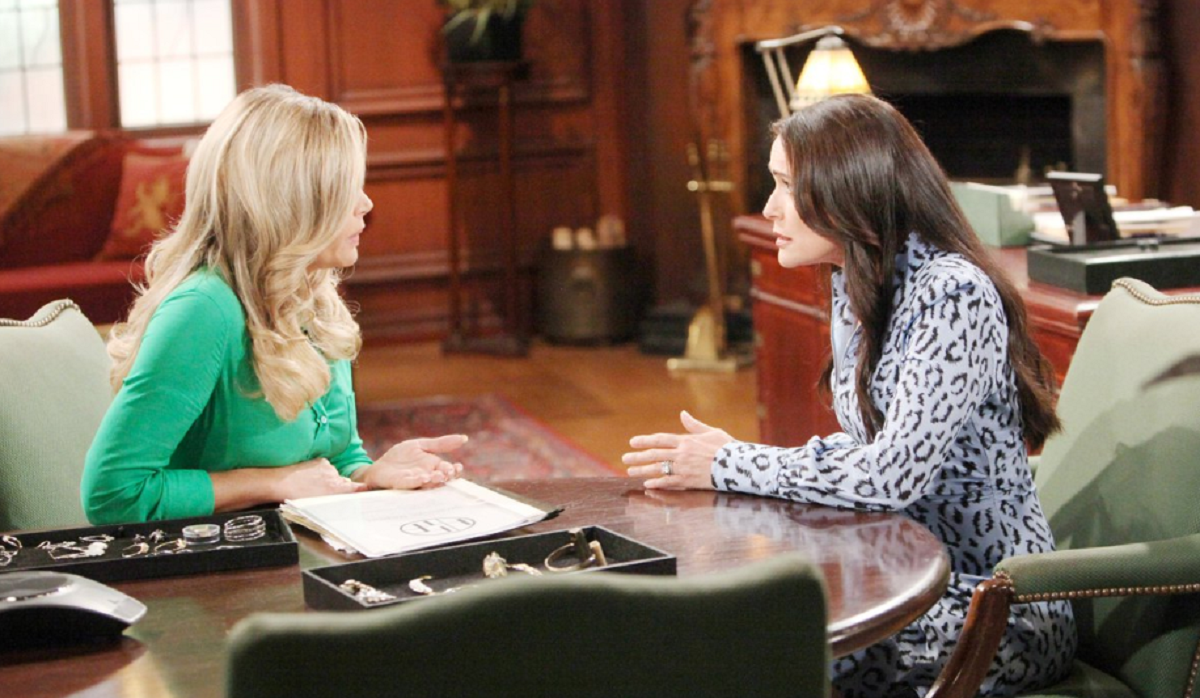 The Bold and the Beautiful (B&B) spoilers for Thursday, September 19, tease that Wyatt Spencer (Darin Brooks) will get an earful from his ex, Flo Fulton (Katrina Bowden). As B&B viewers know, Flo would like nothing more than to get back together with Wyatt, but she knows that it will be a long and difficult road if that’s to happen.

After all, Wyatt is still quite upset with her over her role in Reese Buckingham’s (Wayne Brady) baby swap and adoption scam. Flo hurt some of the people who Wyatt loves the most, and he’s not willing to just forgive and forget.

But on Thursday’s episode of B&B, Flo will once again approach Wyatt. She feels terrible for what she’s done, and she’ll want to broach the topic of forgiveness with him. Now that Flo’s legal woes are behind her and she’s been set free on an immunity deal, she wants more than anything to secure forgiveness from the Logans and the Forresters, and especially from Wyatt. She’ll make yet another pitch to Wyatt about how sorry she is for what she’s done, and she’ll likely ask Wyatt to forgive her once again.

The Bold And The Beautiful Spoilers: Is Thomas Heading Toward Redemption? https://t.co/ESukHnGepY pic.twitter.com/7rc2gcMXx8

Bold And The Beautiful Spoilers – Wyatt Spencer Will Offer Her Compassion

According to B&B spoilers, Flo will not only ask for forgiveness, but she’ll also profess her undying love for her former beau and high-school sweetheart. And rather than giving her the cold shoulder, B&B spoilers say that Wyatt will offer her compassion as she bares her soul. That sounds like a very “Wyatt” thing to do, but will he also tell Flo that he’s back together with Sally Spectra (Courtney Hope)? It certainly seems like he should, but B&B viewers will have to wait to see how it all unfolds.

Meanwhile, on Thursday’s new episode of B&B, Shauna Fulton (Denise Richards) will take some time out from dreaming about Ridge Forrester (Thorsten Kaye) to focus on her daughter’s love life. Shauna only wants what’s best for Flo, and she is willing to go to great lengths to ensure that Flo gets what she wants. She even went to see Brooke Forrester (Katherine Kelly Lang) to advocate for Flo, which was a big step that unfortunately didn’t have the desired effects.

Well, it seems that Shauna will pay a visit to Quinn Forrester (Rena Sofer). As B&B viewers will remember, these two ladies are old friends, and they have a long history together. Even though Quinn isn’t happy with Flo and how she led Hope Logan (Annika Noelle) and Liam Spencer (Scott Clifton) to believe that their daughter had died, it seems that Quinn will be willing to at least talk to Shauna and hear what she has to say.

Shauna will ask for a big favor from Quinn. She’ll want Quinn to help foster a reunion between Flo and Wyatt. Back before the truth came out about what Flo had done, Quinn was very happy that Flo and Wyatt were together, and Shauna is hoping that Quinn will be able to forgive Flo and once again advocate for her son to be with Flo. But will Quinn agree to do so?

We think there’s a good chance she will. Sure, she’s unhappy with what Flo did, but one thing’s for sure – Quinn does not want Wyatt to be with Sally. We’re guessing that she’d much rather Wyatt end up with a repentant Flo than with Sally under any circumstances.

The Bold and the Beautiful Spoilers: Shauna Pressures Quinn To Make Sure Flo Ends Up With Wyatt

According to B&B spoilers, Shauna will specifically ask Quinn to make sure that Wyatt ends up with Flo and not Sally. This will be a very tempting proposition for Quinn, who will probably readily accept the mission. Be sure to tune in on Thursday to catch up on everything happening on B&B right now. Check Hollywood Hiccups often for updates, news, rumors, and spoilers!