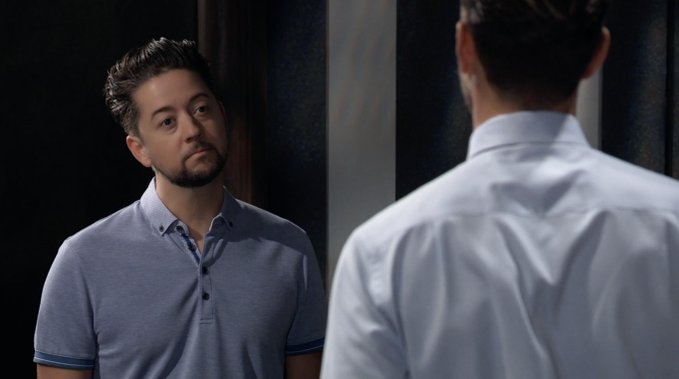 Carly is sorry for not telling Bobbie about the surgery. Sonny brings Carly food from Kelly’s and greets Bobbie. Carly says they decided to keep the sex of the baby a secret. Carly wants to surprise everyone at the birth. Bobbie wants to get the truth out of Carly but has to pick up Wiley. Sonny is shocked that Carly didn’t tell Bobbie about the baby’s condition. Carly doesn’t want Bobbie to hover.

General Hospital spoilers tease Carly shows Sonny a brochure on a school for Dev. Sonny is upset that Carly wants to send Dev away. Carly refuses to ask Jocelyn to continue to lie to Jacks. Sonny thinks they could consider letting Jocelyn move in with Jasper Jacks (Ingo Rademacher) for a while. Carly refuses to uproot Jocelyn. Sonny is just trying to help Dev out.

Carly thinks the best way to help Dev is to keep a distance. Carly says Dev can create the life he wants. Sonny promises to make a decision before the baby is born. Carly wants Jocelyn to pick what is right for her. Jocelyn arrives home and sees the brochure about boarding school.

General Hospital’s Jocelyn Jacks (Eden McCoy) and Dev are discussing school. Dev is concentrating on overhearing Carly planning to send him away. Sonny approaches the kids and asks what they are doing. Jocelyn says they are swamped with homework.

Sonny tells Dev to take a few days off work. Jocelyn promises to do what she needs to for Carly and the baby. Jocelyn tries to explain why she doesn’t like being in the school building. Jocelyn doesn’t want to mess up too bad. Dev feels like he is getting in the way at the warehouse and home.

Lulu is upset over her stories and wants a change. Maxie tells Lulu that better stories would cut into her time with Dustin Phillips (Mark Lawson). Lulu says Maxie is second in line at Crimson. Lulu thinks Maxie is keeping something from her. Peter apologizes for crossing the line. Maxie has no intention of leaving Crimson. Lulu asks Maxie if she doesn’t want more.

Peter tells Lulu not to rock the boat at work. Lulu thanks Peter for talking to her editor. Peter leaves. Maxie doesn’t want her own magazine, there is no offer on the table. Maxie says she belongs at Crimson. Maxie talks about her own magazine.

General Hospital’s Shiloh Archer (Coby Ryan McLaughlin) takes the stand and tries to make DOD look good. Shiloh talks about the good he has done with its members. Shiloh accuses Jason Morgan (Steve Burton) of trying to kill him.

Shiloh accuses Sam of lying. Shiloh brings up Sam’s marriage to his father. The assistant D.A. questions Shiloh about the trust of Dawn of Day. Shiloh admits that the truth includes sex with him. Shiloh is asked how many women he has ordered to drink that tea. How many people he has marked with his tattoo. How many people he has sexually assaulted.

Shiloh refuses to answer. Jason sends Damien Spinelli (Bradford Anderson) to find the connection between Shiloh and Peter. Peter’s henchman joins the guard as Shiloh is being taken out. Peter calls his man who says the situation is being handled.

Spinelli walks in as Peter tells the guard to keep him posted. Sam and Jason want Robert Scorpio’s (Tristan Rogers) opinion on the testimony. Robert warns Jason against killing Shiloh. Jason tells Sam if the system fails, he will take care of this personally. Harrison Chase (Josh Swickard) tells Sam and Jason that Shiloh has escaped. Shiloh stops Bobbie car dressed as a cop.