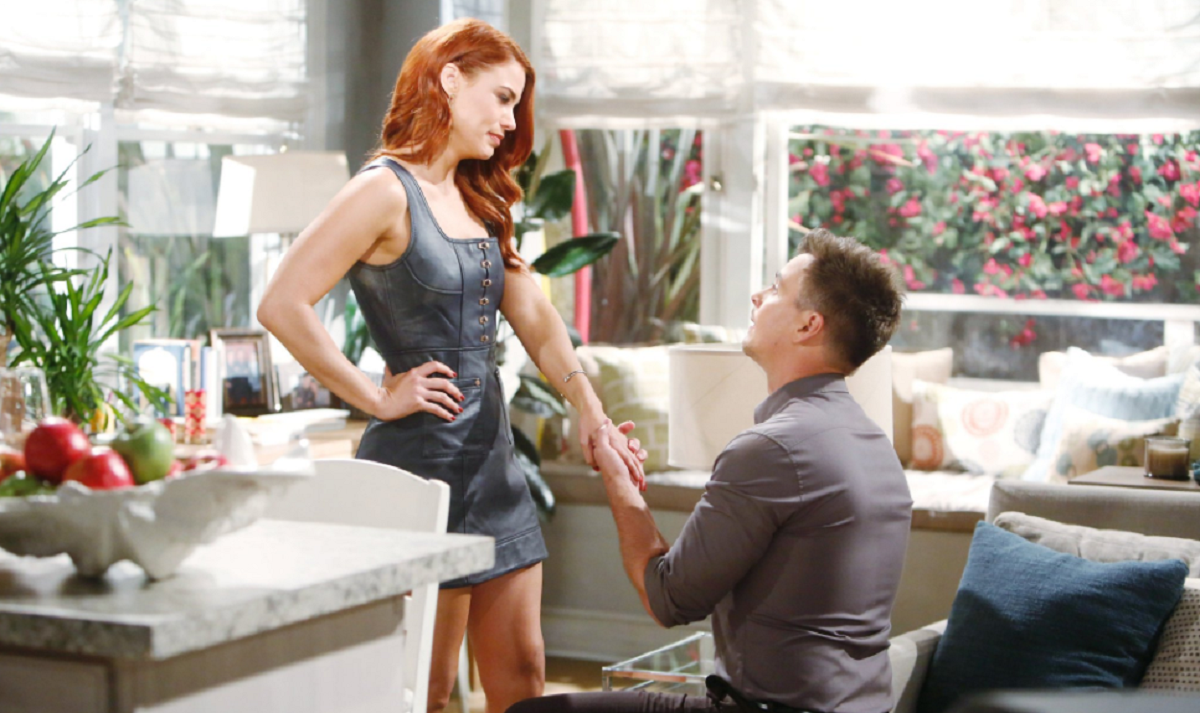 The Bold and the Beautiful (B&B) spoilers for Monday, September 23, tease that Katie Logan (Heather Tom) will be in bad shape. As B&B viewers know, she collapsed and fell unconscious at the home of Bill Spencer (Don Diamont).

Katie hadn’t been feeling well ever since her tense run-in with Flo Fulton (Katrina Bowden) a few days ago. Katie had been experiencing fatigue and pain in her lower back and legs, and Bill was just preparing to take her to the doctor for a checkup.

Once Katie collapsed, Bill panicked and tried to find a pulse. It looks like he’ll have her immediately rushed to the hospital, where she’ll undergo extensive testing. According to B&B spoilers, we’ll see the return of Dr. Jordan Armstrong, who viewers will remember as the doctor who treated Thomas Forrester (Matthew Atkinson) after his fall from the cliff. Dr. Armstrong and his team will search for answers to what befell Katie.

And it won’t be long before Bill reaches out to Katie’s other family members and lets them know about her health crisis. Brooke Forrester (Katherine Kelly Lang), Donna Logan (Jennifer Gareis), and others will likely rush to the hospital to support Bill and Katie. There will definitely be some tense moments as everyone waits and wonders about what could be wrong with their beloved Katie.

The Bold And The Beautiful Spoilers: Wyatt Proposes To Sally –But Is He Really Over Flo? https://t.co/yTlJCnSFLz pic.twitter.com/L4p65QYTgF

The Bold and the Beautiful spoilers say that Katie will remain unconscious and that Bill will demonstrate his love for his wife-to-be in a very dramatic way. He’ll be by her side and profess his undying love to her, and even though she’s unresponsive, he’ll hope that she’s able to somehow hear him and feel his love and support. It will be a big moment for Dollar Bill, who will show his softer side in these troubling moments.

Next, on Monday’s new episode of B&B, Wyatt Spencer (Darin Brooks) will wait anxiously for an answer from Sally Spectra (Courtney Hope). As B&B viewers know, Sally just opened up to Wyatt about her fears in embarking on a relationship with him. She admitted that she is afraid that she’ll always be unlucky in love and will perpetually be the woman who loses the guy to another woman.

Bold And The Beautiful Spoilers – Will Sally Spectra Be Comfortable Accepting?

And with that, Wyatt got down on one knee and make an impromptu proposal of marriage, right there in the beach house. Sally is currently standing there stunned and completely touched by Wyatt’s gesture. But what will her reaction be to the proposal? Chances are, Sally will want to talk a bit more before she agrees to become Wyatt’s wife, especially since it wasn’t that long ago that Wyatt was with Flo.

The Bold And The Beautiful Poll: Is Brooke And Ridge Headed For A Divorce?

Sally will probably want to be 100% sure that Wyatt is sincere in his proposal, and that he’s not just making the decision to reassure her about his intentions. After all, Sally was hesitant about becoming intimate too quickly with Wyatt, so will she really be comfortable with the idea of marriage at this point? B&B viewers will have to tune in to see what Sally ultimately decides.