The Young And The Restless Spoilers: Does Hilary Have A Twin – Or Is The Doppelganger The Real Deal? 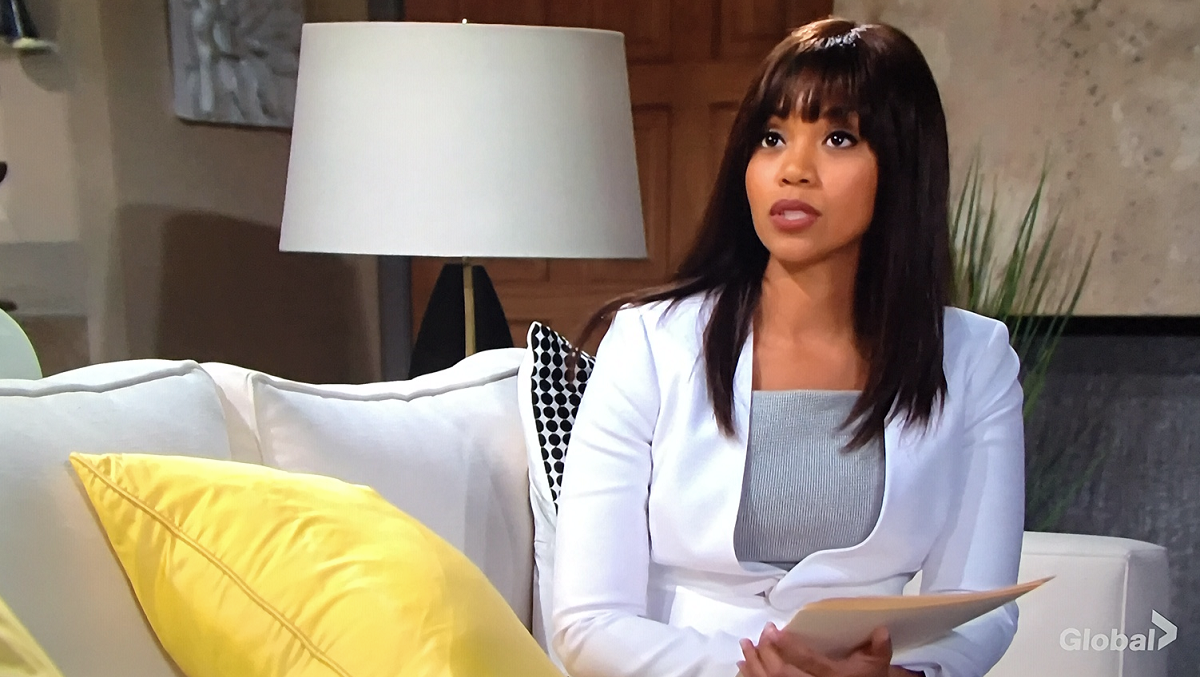 The Young and The Restless (Y&R) spoilers tease that Hilary Curtis Hamilton (Mishael Morgan) could either have a twin, Amanda Sinclair, that she was separated from at birth. Or she could even be Hilary herself, not as dead as she was presumed to be, and possibly suffering from amnesia again under a new identity!

Devon Hamilton, (Bryton James) who only recently moved on from his wife Hilary’s untimely death to become involved with Elena Dawson (Brytni Sarpy), made an appointment with the attorney who sent the challenge to his grandmother Katherine Chancellor’s (Jeanne Cooper) will, Amanda Sinclair. As Y&R viewers will recall, he opened his door to see Hilary’s exact double standing before him!

He invited her in, but she could tell that he was extremely uncomfortable and asked if everything was okay. He told her she looks just like his late wife and doesn’t think it is a coincidence. He thinks Chance Chancellor (John Driscoll) who she has revealed as her client, picked her purposely because she looks just like Hilary! Amanda is bewildered and tells him she is sorry for his loss.

The Young and the Restless Spoilers: Is Devon Ready To Take The Next Step With Elena?

Apparently, Chance had become aware of a different version of Katherine’s will, that did not leave the bulk of her estate to Devon, and Chance had found this out from the late attorney, David Sherman, who also had since passed away but had made a deathbed confession that he altered the will after being paid to do so by Tucker McCall (Stephen Nichols). Devon doesn’t believe her and says that alternate version isn’t real. She hands him her card and tells him she’s at The Grand Phoenix.

Hilary died from disseminated intravascular coagulation, a blood clotting disorder she had developed as the result of a car accident. She had also been pregnant with Devon’s child, and she miscarried. They married in the intensive care unit of the hospital, and she died the next day in Devon’s arms. There was a memorial service for her and an on-air memorial on her television show, hosted by he co-worker Mariah Copeland (Camryn Grimes).

It doesn’t seem possible or likely that she could be back with amnesia and a new name, although when there is no burial on a soap opera it sometimes means the character somehow did not die after all. Right now on the show Victor Newman (Eric Braeden) is supposedly dead. But Victor has faked his death several times, and Adam Newman (Mark Grossman) has also come back from the dead and returned to Genoa City. It doesn’t seem likely that Hilary faked her death, although she has had amnesia before.

Young And The Restless Spoilers – Could Hilary Hamilton Have Had A Twin?

Hilary was the daughter of the late  Rose Turner (Leslie Stevens). Not much is known about her early life and how or where she grew up, except that prior to coming to Genoa City she was using the name, Ann Turner.

The Young And The Restless Spoilers For Friday, Sept. 20: Murder Evidence Points To Victoria, Adam’s Sneaky Plan – Chance’s Will Shocker#YoungandRestless#YRhttps://t.co/mf9cgUhkJ1

Under those kind of circumstances, and that she apparently sought out her mother, possibly having been adopted, it is entirely possible she has a twin who was also adopted and grew up to be Amanda Sinclair.

This seems to be the most logical scenario, although if as other Y&R spoilers tease, it is not Chance but really Adam who is behind this challenge to Katherine’s will. He would do something as mean as hire Hilary’s previously unknown twin to represent his interests to Devon. Stay tuned to The Young and The Restless, and keep checking The Young and The Restless (Y&R) spoilers frequently for all the latest news, updates and developments!