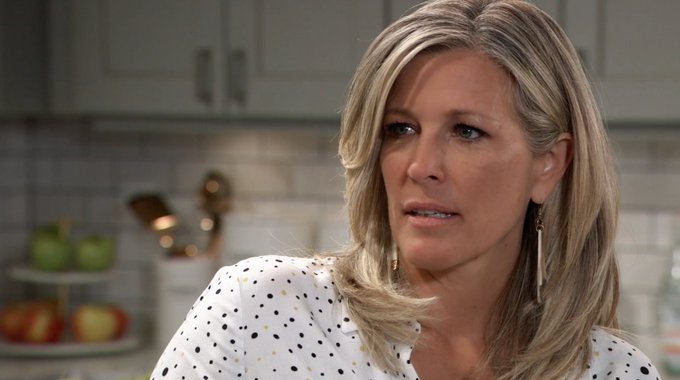 On Monday, Bobbie Spencer (Jacklyn Zeman) is stranded on the side of the road after Shiloh Archer, (Coby Ryan McLaughlin) who escaped, dressed like a policeman and pulled her over. He then steals her car and it looks like there could be a baby seat in the back seat! Could Shiloh have scored himself a bonus thinking Wiley Cooper-Jones (Erik and Theodore Olson) is his son with Willow Tait (Kateyln MacMullen)?

Elsewhere, Jasper Jacks (Ingo Rademacher) confronts Sonny and Carly Corinthos (Maurice Benard, Laura Wright). Monday’s GH preview shows that Josslyn Jacks (Eden McCoy) saw a boarding school brochure that Carly had been looking at not for her, but for Dev Cerci (Ashton Arbab) and has a huge misunderstanding! This is likely what Jax confronts them about! Also on Monday, Sam McCall (Kelly Monaco) rushes to The Haunted Star, Dr. Hamilton Finn (Michael Easton) meets up with Peter August, (Wes Ramsey) and Kim Nero (Tamara Braun) is frantic!

On Tuesday, Jason Morgan (Steve Burton) tries to reach Sam and is unable to, and will likely be concerned that she has run into Shiloh and is in danger! Chase takes time to comfort Willow, as she will be very worried if Wiley was in the backseat of Bobbie’s car and is missing along with Shiloh! Also on Tuesday, Peter collects money, Maxie Jones (Kirsten Storms) meets with Damian Spinelli, (Bradford Anderson) and Shiloh is reluctant.

On Wednesday, Sam is trapped aboard The Haunted Star and Detective Harrison Chase heads to the docks. General Hospital viewers can be sure that Jason will be right behind him if he’s heading down to rescue Sam! Also on Wednesday, Brad Cooper (Parry Shen) apologizes for his misdeeds; it sounds like he confesses to the baby swap! Elizabeth Baldwin (Rebecca Herbst) will tell Cameron Webber (William Lipton) about Franco Baldwin (Roger Howarth) and Mayor Laura Collins (Genie Francis) will thank Peter.

General Hospital Rumor: Kim Pregnant With Franco's Child When He Gets His Memories Back? @celebratesoaps https://t.co/reWbVQO3wE

On Thursday, Sasha Gilmore (Sofia Mattsson) gets ready to meet Nina Reeves (Cynthia Watros) for dinner; but will she have the nerve, or the heart, to tell her the truth? Meanwhile, Chase brings a stretcher to General Hospital; but who will be on it, Sam or Shiloh? Also on Thursday, Michael Corinthos (Chad Duell) and Willow cross paths; Hayden Barnes (Rebecca Budig) and Curtis Ashford (Donnell Turner) cross paths; and Julian Jerome (William DeVry) corrects his sister, Ava Jerome (Maura West).