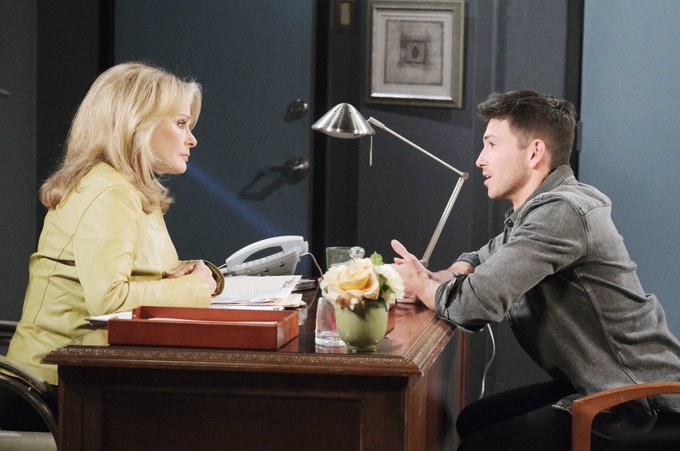 Days of Our Lives spoilers reveal Ben Weston (Robert Scott Wilson) is concerned about his sister’s veiled threat. After having a disturbing conversation with Jordan Ridgeway (Chrishell Hartley), he is scared for Ciara Brady (Victoria Konefal). Can Ben save Ciara from his killer sister?

During a recent episode of DOOL, Ben and Ciara went to Rafe Hernandez’s (Galen Gering) house. The goal was to visit with baby David, but they were disappointed. It turns out Jordan was released from Bayview already. She made it clear that she didn’t want “Cin” near her child.

While Ben and Jordan had a private conversation, the physical therapist made a “veiled threat.” Ben took it as Jordan’s intention of hurting Ciara. She claimed it was a statement referring to her fear of Ben killing his girlfriend. However, it seems that Ben has a good reason to be worried. Obviously, Jordan is not in her right mind and was released prematurely.

Days of Our Lives spoilers tease that Ben will give Ciara a warning. He doesn’t want to alarm her, but doesn’t want her life in danger. Remember, Jordan nearly set her on fire and she almost lost her life. He tells Ciara to make sure she is never alone with the delusional woman.

Days of Our Lives Spoilers – Can Ciara Brady be Saved?

There is no news of Victoria Konefal leaving Days of Our Lives. This seems to indicate that whatever happens, Ciara will survive. However, she might have a few close calls. Eventually, Jordan will want to act on her delusions.

Days of Our Lives Spoilers: Ben Asks Marlena for Help, Doesn’t Believe Jordan is Sane, But Will Anyone Believe Him? https://t.co/DLV6durspd pic.twitter.com/MqCRPXReDu

Although Ben and Ciara have great chemistry and passion together, there is concern about their future. Could Ben break things off with his girlfriend in order to save her? It is a possibility. He loves her more than anything, but will do whatever is necessary to protect Ciara.

There is also a chance that Jordan will be the straw that breaks the camel’s back. There is only so much a couple can go through before their relationship suffers. She may not succeed in killing Ciara, but Jordan’s actions could do something just as damaging.