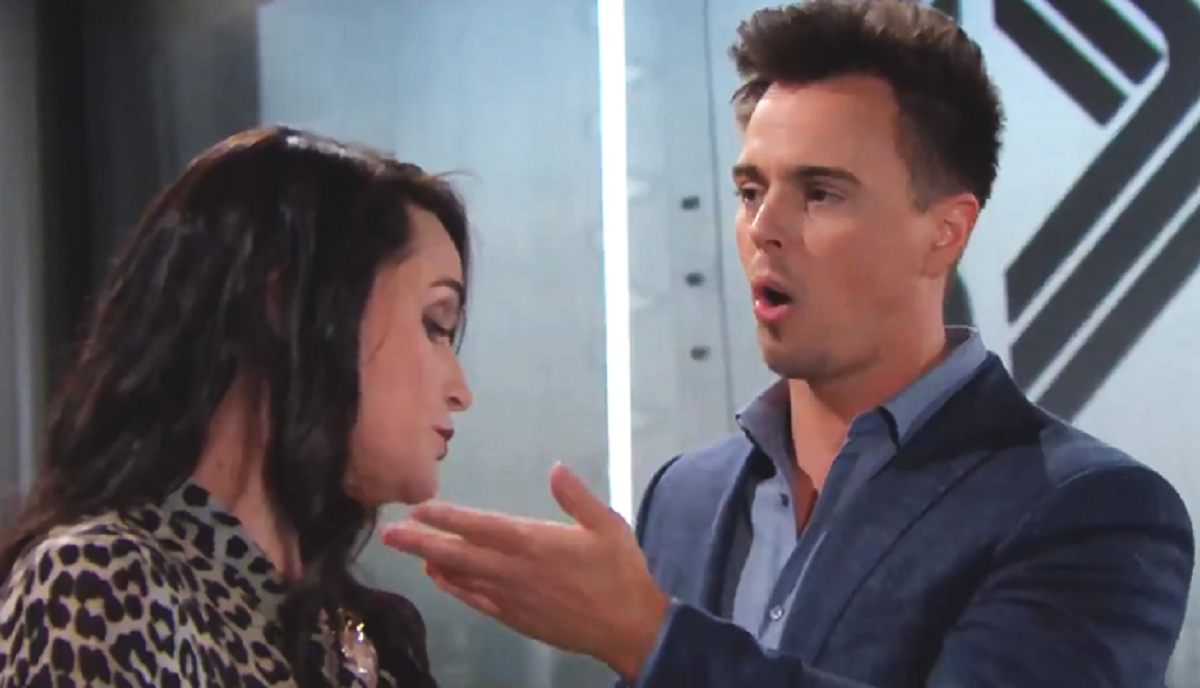 The Bold and the Beautiful (B&B) spoilers for Tuesday, September 24, tease that Wyatt Spencer (Darin Brooks) and Sally Spectra (Courtney Hope) have something big to celebrate. As B&B viewers know, they just got engaged and they’ll want to happily share the news with their family and friends.

But they haven’t considered yet how one particular person will react…Wyatt’s mom, Quinn Forrester (Rena Sofer). Quinn hasn’t been the biggest fan of Sally in the past, and she doesn’t like the idea of Wyatt and Sally being in a relationship, so she’s probably not going to be too happy to find out that they’re engaged.

In fact, B&B spoilers say that Quinn will make her feelings about Wyatt and Sally well-known on Tuesday’s episode. First, Quinn will voice her opinions to her husband, Eric Forrester (John McCook). Whether or not Quinn knows at that point that Wyatt and Sally are engaged remains to be seen, but whatever the case, it seems that Quinn will let it be known that she doesn’t want Wyatt with Sally and would rather that he forgive and reunite with Flo Fulton (Katrina Bowden).

As B&B viewers know, Wyatt promptly dumped Flo after it came out that Flo knew about Beth Spencer’s (River Davidson and Madeline Valdez) existence but kept it from Hope Logan (Annika Noelle) and Liam Spencer (Scott Clifton). And it wasn’t just a small one-time lie; Flo pretended to be Beth’s birth mom and helped convince Steffy Forrester (Jacqueline MacInnes Wood) to adopt the little girl, whom she named Phoebe Forrester. Wyatt couldn’t tolerate what Flo had done, and he severed ties with her.

Of course, Eric will probably be surprised to hear that Quinn thinks Wyatt should be with Flo after everything that Flo has done, but it looks like he won’t be as surprised as Wyatt himself. According to B&B spoilers, Quinn will express her opinion about Flo to Wyatt directly. She’ll urge her son to dump Sally and reunite with Flo, which won’t be what Wyatt wants to hear as he’s trying to tell his mom that he’s happily engaged to Sally.

As B&B viewers know, Quinn gets pretty forceful when it comes to her opinions, so Wyatt will probably end up exasperated and pretty frustrated with his mom’s opinion. But that won’t stop Quinn from pushing Wyatt to do as she wants. Hopefully, Wyatt will be just as forceful with his mom in telling her to mind her own business and let him make his own decisions!

Next, on Tuesday’s new episode of B&B, Katie Logan’s (Heather Tom) family will gather at the hospital. Katie recently collapsed after complaining of fatigue and back/lower leg pain. The situation was quite scary for Bill Spencer (Don Diamont), who called the EMTs and got Katie to the hospital as soon as possible. Now she’s in the care of Dr. Jordan Armstrong (Vincent Irizarry), who B&B viewers will remember from treating Thomas Forrester (Matthew Atkinson) not too long ago.

It looks like Brooke Forrester (Katherine Kelly Lang), Ridge Forrester (Thorsten Kaye), and Donna Logan (Jennifer Gareis) will soon show up to rally around Katie and Bill and offer their support. They’ll have no idea what could be wrong with Katie, but they’ll probably suspect that it could have something to do with her heart, since she’s a heart transplant recipient, having received her brother Storm Logan’s (William deVry) heart a few years ago.

The Bold and the Beautiful Spoilers: Shauna Inspires Daughter – Flo Won’t Give Up On Wyatt https://t.co/1Br3e2Qxh0 pic.twitter.com/HrQAu0Yb3d

However, B&B spoilers indicate that Katie will be dealing with a different problem. She’ll be in kidney failure, with both of her kidneys compromised. She’ll need a donor kidney to survive, and it looks like time will be of the essence. That will be dire news for Katie’s family, but for the time being, they’ll wait and wonder what could be wrong with her. They’ll have each other for support, but there will definitely be some tense moments as they wait for answers.