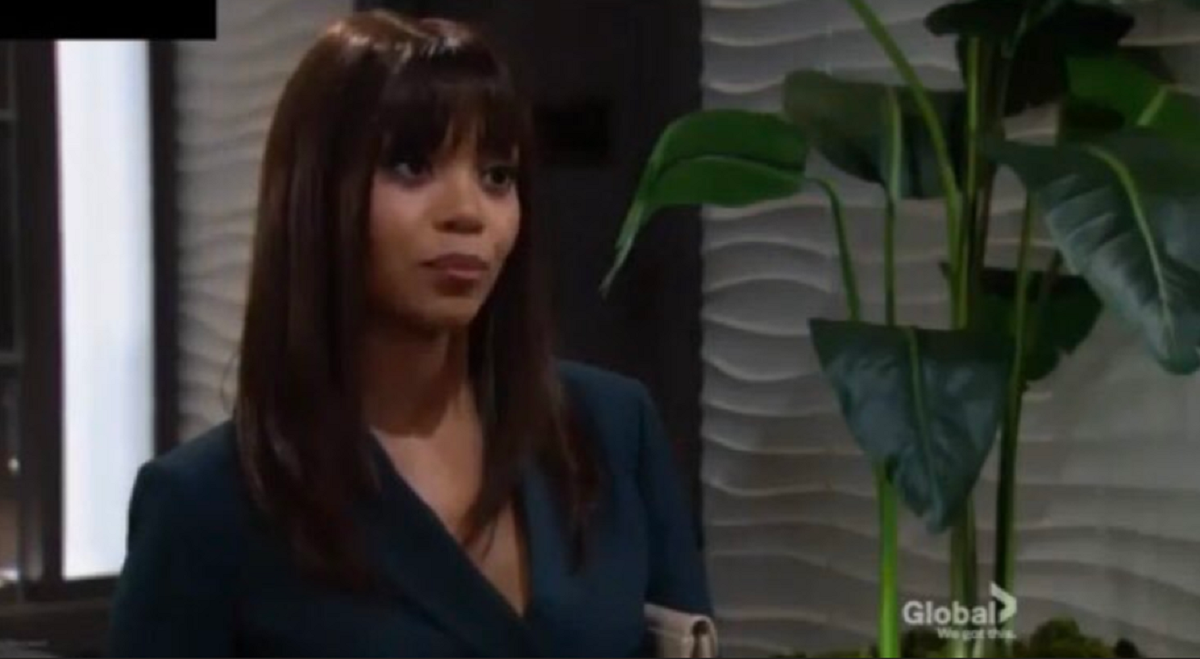 The Young and the Restless (Y&R) spoilers Thursday, September 26, tease that Elena Dawson’s (Brytni Sarpy) birthday party will bring a bombshell. At the Grand Phoenix, Devon Hamilton (Bryton James) insists he has something important to tell Mariah Copeland (Camryn Grimes). She’s eager to head out to the car and get a gift for Elena, so she dodges the discussion.

Moments later, Mariah reels as she comes face to face with Amanda Sinclair (Mishael Morgan). She freaks over Hilary Hamilton’s (Mishael Morgan) lookalike, so Devon walks over and explains this is what he wanted to tell her about. Amanda’s annoyed and argues they should just round up everyone who knew this Hilary person. She offers to let them gawk and ask questions so they can be done with it.

Tessa Porter (Cait Fairbanks), Nate Hastings (Sean Dominic) and Abby Newman (Melissa Ordway) are also on hand for the party, which gets cut short due to Amanda’s appearance. Before she goes, Amanda mentions some paperwork Chance Chancellor’s sending Devon overnight. She intends to make sure Katherine Chancellor’s (Jeanne Cooper) true final wishes are carried out.

The Young And The Restless News: Jeffrey Vincent Parise Joins The Cast As Simon Black – Find Out The Details Here!

Once Devon and Elena make it home, he gives her a cupcake with a candle on it and apologizes for the birthday disruption. Elena uses her wish to hope for quick resolution on Katherine’s will and wants Amanda to go back to where she came from. Back at the Grand Phoenix, Mariah’s still rattled over Hilary’s lookalike. Tessa consoles Mariah, who cries about the loss of Hilary and how it affected her.

Over with Abby and Nate, they discuss the subject of Amanda briefly. Talk eventually turns to Victor Newman (Eric Braeden), so Abby admits she still feels guilty about her deception. Nate’s positive this will all be over soon – one way or another.

At Society, Rey Rosales (Jordi Vilasuso) pops in to see Lola Abbott (Sasha Calle) and teases her about trying to play Cupid for him. When he exits, Sharon Newman (Sharon Case) spots him from afar. She also chats with Jack Abbott (Peter Bergman), who brings Sharon up to speed on Dina Mergeron (Marla Adams) and his desire to write a book with Traci Abbott (Beth Maitland).

The Young and the Restless Spoilers Wednesday, September 25: Adam Throws Sharon Out – The Ruse About Victor Continues – Billy Heads Back To Therapy https://t.co/ZLjEFwjkz6 pic.twitter.com/chh5YRFXkK

Once Jack asks about Adam Newman (Mark Grossman), Sharon confesses she wanted to help Adam and nothing more. She hints that her mission is over before the conversation shifts to Rey. Sharon notes that she can only tackle one ex at a time, but she ends up speaking to Rey later. She sees him at Crimson Lights and admits he was right about Adam, who can’t be helped.

Sharon wishes she’d listened to Rey and feels like a failure, but he disagrees. Since Sharon broke free from Adam, Rey thinks she was a success. He wonders what’s next for Sharon, so she points out that she’s ready for a fresh start.

Back at Society, Theo Vanderway (Tyler Johnson) surprises Lola in the kitchen and has a proposition for her. He wants to make amends with Kyle Abbott (Michael Mealor) and needs Lola’s help. Lola mentions the knife she’s holding, but Theo makes it clear he just wants his friend back. Since Lola and Kyle are a team, Theo knows he has to win them both over.

Lola accidentally cuts herself due to the distraction and winds up with some blood on her finger. When Theo sees it, he passes out and falls to the floor. Lola’s amused by the “big marshmallow” when he wakes up. She decides she’ll give Theo another chance and will help him out with Kyle if he can respect their marriage.

At Jabot, Summer Newman (Hunter King) bonds with Kyle as they discuss Victoria Newman’s (Amelia Heinle) arrest as well as Victor’s passing. Kyle earns a laugh when he talks about being on Victor’s bad side. Summer’s happy Kyle stayed at the office tonight, and he’s glad he stuck around, too. They work on a presentation, which displays their great teamwork once again. Kyle’s pleased to have Summer as his secret weapon.

Once Jack appears, Summer jokingly wonders about Kyle hitting his head and becoming compassionate. Jack notes that’s the real Kyle and is glad Summer took notice. He sends Kyle out to handle something, which leaves him to speak with Summer alone. Jack lets Summer know he’d move mountains for her and pulls her into a warm embrace.

The Young and the Restless spoilers say some fantastic scenes are coming up. We’ll give you updates as other Y&R news and rumors emerge. Stay tuned to see what’s next in Genoa City.