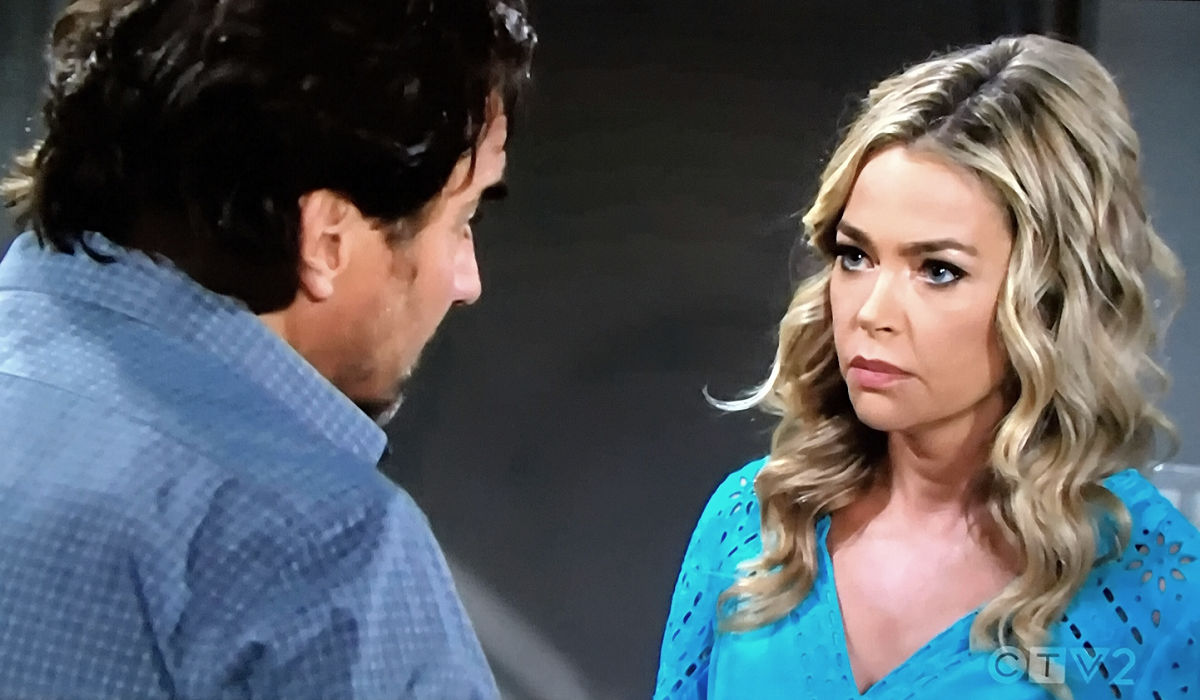 The Bold and the Beautiful (B&B) spoilers for Friday, September 27, tease that Brooke Forrester (Katherine Kelly Lang) will return home to an unpleasant surprise. As B&B viewers know, Brooke has just left the mansion to go visit Katie Logan (Heather Tom) at the hospital. But it seems that she may return to the mansion, as B&B spoilers indicate that she’ll find Thomas Forrester (Matthew Atkinson) there.

As B&B viewers know, Thomas snuck into the mansion to see Douglas Forrester (Henry Joseph Samiri) when he encountered Ridge Forrester (Thorsten Kaye). The two had words and Thomas learned that Brooke didn’t want him around the mansion or around Douglas. That seriously peeved Thomas, who is now very much in anti-Brooke mode.

Well, it looks like Brooke will utterly explode when she finds Thomas in her home. She’ll let him have it, and according to B&B spoilers, he’ll let her have it right back, as an epic fight between the two will ensue.

Bold And The Beautiful Spoilers – Brooke Forrester Lashes Out

She’ll probably blast him for his role in keeping Beth Spencer (River Davidson and Madeline Valdez) from Hope Logan (Annika Noelle) and Liam Spencer (Scott Clifton), and Thomas will probably blast her right back for pushing him over the cliff at Steffy Forrester’s (Jacqueline MacInnes Wood) house.

The Bold And The Beautiful Spoilers: Brooke Learns About Ridge’s Secret — Shauna’s Scheme Gets More Sinister

At any rate, B&B spoilers indicate that this will just be the beginning of a full-scale war between Thomas and Brooke. From here, Thomas will decide to make it his primary goal to rid himself and the Forrester family of the Logans for good, and it looks like he’ll start with trying to break up his father’s marriage to Brooke.

Toward that end, ongoing B&B spoilers say that Thomas will eventually learn something from his friend Vinny Walker (Joe LoCicero) that will help him in his quest to break up “Bridge.” On Friday’s episode, Vinny will show up at Bikini Bar and strike up a conversation with Danny the bartender (Keith Carlos). B&B viewers will remember that Danny’s under the impression that Ridge and Shauna Fulton (Denise Richards) recently slept together.

It looks like Danny will fill Vinny in on Ridge and Shauna’s supposed tryst, and that will be information that Vinny will pass onto Thomas down the line. At any rate, look for Thomas to eventually use that information to his advantage in his master plan to break up Bridge.

Speaking of Shauna, she’ll come to Ridge’s aid once again on Friday’s episode of B&B. Ridge will be in crisis and he’ll feel like he has to make a big decision. He’ll be mulling that decision over when he’s approached by Shauna, who will be more than willing to listen and provide her two cents on the matter.

Exactly what Ridge’s big decision remains to be seen, but it will likely have something to do with what to do about Thomas and his desire to return to the fold.

Bold And The Beautiful Spoilers – Thomas Forrester Wants To Return

As B&B viewers know, Thomas just showed Ridge some of his designs, which Ridge very much liked. Thomas may want to come back to Forrester, which is a decision that would very much upset Brooke.

The Bold And The Beautiful Spoilers: Danny Blabs To Brooke – Reveals Ridge Spent The Night With Shauna https://t.co/G3w5AlZnna pic.twitter.com/9SRHukazoC

At any rate, look for Shauna to be there for Ridge in way that Brooke can’t be, which is certainly a dangerous situation for Ridge. And it will probably only serve to deepen Shauna’s feelings of attraction toward Ridge going forward.