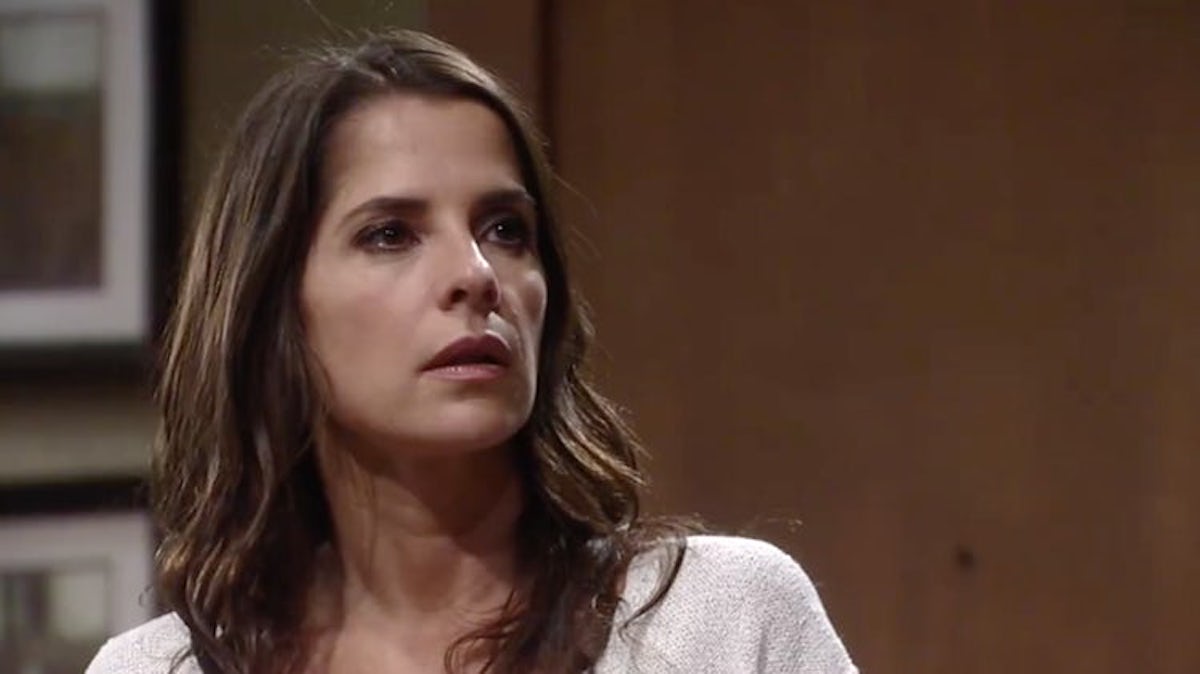 General Hospital (GH)  spoilers for Monday, September 30, tease that Sam McCall (Kelly Monaco) will be in a tight spot. Jordan Ashford (Briana Nicole Henry) will insist that the sooner they get this settled, the better it’ll be for all involved.

Sam will look nervous as the investigation into Shiloh Archer’s (Coby Ryan McLaughlin) death heats up again. Thanks to that eavesdropping nurse’s statement, Sam will ultimately be arrested!

Meanwhile, the news of Shiloh’s demise will spread. Willow Tait (Katelyn MacMullen) will head to Pentonville, where she’ll fill Harmony Miller (Inga Cadranel) in. Harmony thought she loved Shiloh once upon a time, but she should be glad he’s gone now. Shiloh was a horrible human who caused nothing but pain and destruction. Harmony should be pleased to know Shiloh won’t hurt Willow or “Wiley Cooper-Jones” ever again.

It looks like Willow will cross paths with another inmate in Monday’s episode. GH’s preview video shows Nelle Benson (Chloe Lanier) telling someone it’s so good to finally meet face to face. She’ll probably have a chat with Willow, who currently believes “Wiley” is the same baby she gave birth to. That’s actually Jonah Corinthos, so Nelle might have a little fun by dropping hints here and there.

At GH, Carly Corinthos (Laura Wright) will have Sonny Corinthos’ (Maurice Benard) support as her C-section begins. Sonny will be excited to meet their new bundle of joy, but there’ll be fear under the surface for these two. They know their baby’s condition could spell trouble, and this birth is happening too early. There are too many factors working against them, so there’s bound to be some drama.

Over with Josslyn Jacks (Eden McCoy) and Michael Corinthos (Chad Duell), they’ll hope for the best and await updates. Josslyn will also want to tell Michael about someone she bumped into in the park. She’ll insist that Michael will never guess who it was.

Other General Hospital spoilers say Kristina Corinthos-Davis (Lexi Ainsworth) will struggle to place someone. She’ll spot Alexis Davis (Nancy Lee Grahn) with another character and feel a sense of familiarity. Kristina will wonder if she’s met this person before – and perhaps she has.

There’s a good chance this is Kendra Lennon, the personal trainer who’s targeting Alexis. GH hasn’t revealed the details of Kendra’s agenda yet, but she’s apparently connected to Kiefer Bauer (Christian Alexander). Maybe Kristina vaguely recalls meeting Kendra at that time in her life or even saw a picture. Kendra was also linked to Shiloh, so it’s possible Kristina saw her around the DoD house as well.