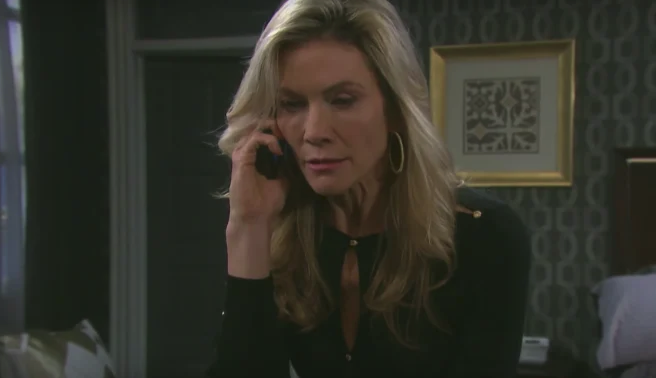 Days of Our Lives (DOOL) spoilers for the week of Monday, September 30 through Friday, October 4, 2019 reveal that after Lucas Roberts Horton (Bryan Dattilo) tried to make a genuine gesture of offering his mother, Kate Robert DiMera’s (Lauren Koslow) heart to a dying Julie Olson Williams’ (Susan Seaforth Hayes), Doug Williams (Bill Hayes) and his daughter, Hope Williams (Kristian Alfonso) learn some heartbreaking news! Kate proves once again how tough she is when she wakes up from what everyone thought was the end of her days. So a weakening Julie makes a heartfelt dying request of her beloved Doug, but will he be able to fulfill it for the love of his life?

DOOL sources tease that an overjoyed Kristen DiMera (Stacy Haiduk) cannot contain her excitement, and immediately tells a devastated and shocked Brady Black (Eric Martsolf) that she is pregnant and the baby is definitely his! How do you think all of Brady’s loved ones are going to react to him having a baby with the evil “spawn” of the late Stefano DiMera (the late – Joseph Mascolo)?

Ciara Brady (Victoria Konefal) and Ben Weston (Robert Scott Wilson) were both dealt a hard blow when they learned that not only is Jordan Ridgeway (Chrishell Stause Hartley) out of the psychiatric facility after what she did to Ciara, she is staying with Rafe Hernandez (Galen Gering) and refuses to allow her own brother, Ben to spend any time with her son and Ben’s nephew, David; which devastates Ben.

Days of Our Lives spoilers show that towards the end of this coming week, the two will become embroiled in another mystery when they insist that Jordan is up to no good as they turn to Salem police detective Lani Price (Sal Stowers), telling her that Jordan attempted to murder Ciara, by trying to run her over with a car. Are they right? Is Jordan still sick and does she still have a serious vendetta against Ciara Brady?

In other DOOL spoilers, Jack Deveraux (Matthew Ashford) meets with his scheming ex-wife, Eve Donovan (Kassie DePaiva) and tells her that he has his memories back. How will Eve react, considering everything she did to make sure this never happened? Gabi Hernandez DiMera (Camila Banus) will also receive devastating news when Lani shoots her husband, Stefan DiMera (Brandon Barash) while on duty. The shooting is clearly an accident and she pleads with Dr. Wilhelm Rolf (William Utay) to save him, but it may be a too little, too late!

Be sure to tune into NBC’s Days of Our Lives (DOOL) on Monday, September 30, 2019 to catch up on everything happening in Salem right now. Check Hollywood Hiccups often for updates, news, rumors and spoilers!