Days of Our Lives Spoilers: Kristen Faces Pregnancy Complications — Baby Not Meant To Be? 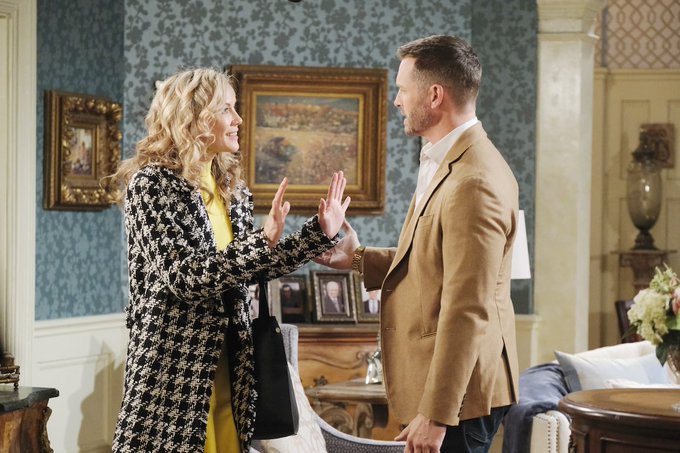 Days of Our Lives (DOOL) spoilers indicate that Kristen’s (Stacey Haiduk) surprise pregnancy will be filled with complications, which could be life-threatening to both mother and baby. For almost as long as the character has been on the screen, her heart’s desire has always been to have the one thing she couldn’t make happen.

To have a baby of her own! But now, thanks to Dr. Rolf’s (William Utay) and his fertility treatments, what was once thought impossible has now happened. Kristen is pregnant! Rolf has told her that she is healthy but that several factors could lead to complication down the road.

Days of Our Lives Spoilers – Kristen DiMera Is An Older Mom

She may not have wanted to hear it, but the truth of the matter is Kristen is a older. And her age could definitely impact both mother and child. It would not be a bit surprising if she has to go bed rest early in the pregnancy, but even that may not prevent complications that might impede carrying the baby to term.

As stated above, Kristen is very healthy and has already started abstaining from alcohol. But it may be another thing for Kristen to keep her stress levels down.

Kristen, on a good day, is still a very high strung person. She is very emotional and lets her feelings carry to some very stressful and volatile places. Even on bed rest, if one of her schemes hit a snag, it will be very difficult for her to remain calm. Perhaps she could learn to suppress her rages, but this will not be easy for her to do.

And if she snaps, the baby’s development, as well as Kristen’s own health, could be severely impacted. And then there is Dr. Rolf’s suggestion that Kristen abstain from sex during the pregnancy.

The one thing Kristen and Brady’s (Eric Martsolf) relationship has always had going for it, is their sexual chemistry. For Kristen to abstain will not be an easy task. If Kristen doesn’t Rolf’s advice though, it could cause even more issues. It will be interesting to see if Kristen even tells Brady that sex isn’t advised.

Days Of Our Lives Spoilers – Cards Stacked Against Kristen DiMera

There is a lot going against her, but this is the one thing Kristen wants more than anything else. So no matter how difficult, she may just manage to do everything right. But in the end, it just might not be meant to be. There is always going to be a possibility of not carrying the baby to term or being stillborn. Kristen has done some pretty evil things in her life, but no one deserves to suffer like that. Hopefully, she can carry the baby to tern and have what she has always wanted, even if Brady isn’t a part of her life at the time.

Will Kristen be able to deliver a healthy baby, or will complications make that impossible? With the rumored time jump coming up soon, we may get out answers sooner rather than later. Be sure to watch Days of Our Lives weekdays on NBC to see how all the baby drama unfolds!