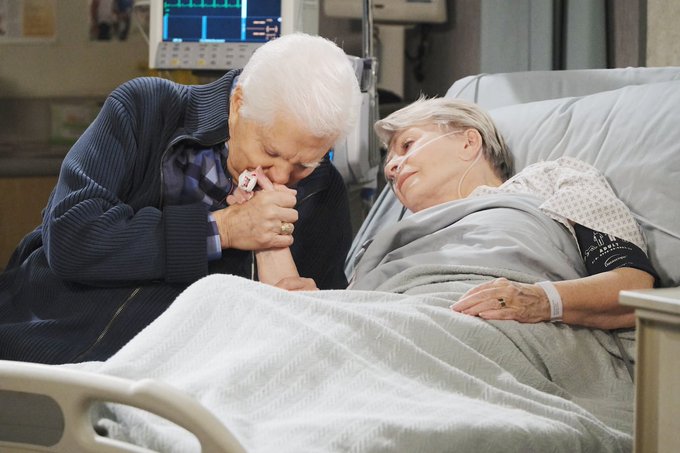 Days of Our Lives spoilers for Monday, September 30 reveal a lot is going to happen in Salem. Expect some bad news, an interrogation and a a joyful reunion. Keep reading to get all the details on what is happening on the NBC soap opera.

All of Julie Williams’ (Susan Seaforth Hayes) loved ones were praying for a miracle. The matriarch is in need of a heart transplant. Once Lucas Horton (Bryan Dattilo) was told Kate Roberts DiMera’s (Lauren Koslow) situation was dire, he decided to give his mother’s heart to Julie. Lucas will come under fire for his decision now that his mother is awake, though.

DOOL spoilers also state that Julie’s hope will crumble when she is told that Kate has woken up from her coma. Of course, she didn’t want Kate to die, but Julie really believed that it was her chance to live a full life. Now where is her new heart going to come from? And will she receive it in time?

Vivian Alamian (Robin Strasser) is the woman who shot and buried Kate. The villainess was counting on Kate dying so she could get away with it. However, Kate is now awake and will tell everyone who tried to murder her.

This leads Detective Rafe Hernandez (Galen Gering) to question Stefan DiMera (Brandon Barash) and Gabi Hernandez DiMera (Camila Banus). They have been questioned about Vivian’s whereabouts before. Will “Stabi” continue lying to protect the resurrected Salemite or tell Rafe the truth? It seems that due to her love for Stefan, she will lie to her own brother about Vivian’s location.

Days of Our Lives spoilers reveal that Gabi doesn’t like Vivian at all, especially after Stefan’s mother suggested that Eve Donovan Deveraux (Kassie DePaiva) would make a better wife. However, Gabi truly loves Stefan and will do anything for him. This includes helping Vivian escape the authorities. As fans know, this gets complicated because Gabi’s brother is the detective on the case.

Days of Our Lives Spoilers: Wally Kurth Back on Contract, Here’s What’s Next For Him In Salem https://t.co/71vHMQqGhU pic.twitter.com/HFDWaOh5kd

Last week, fans saw Jack Deveraux (Matthew Ashford) save Jennifer Horton (Melissa Reeves) from Dr. Henry Shah (Piter Matek). The deranged doctor always seemed to kind and gentle. However, we saw his dark side and he was going to kill Jennifer. Thankfully, Jack performed a solo rescue, killed Dr. Shah and managed to get his memories back in one explosive, heart-thumping scene.

On Monday’s episode, expect Jack and Jennifer to be happily reunited with their son, JJ Deveraux (Casey Moss). They will not only show that Jennifer is alive, but that Jack remembers everything, including his son.

Be sure to tune in to catch up on everything happening on the DOOL right now. Come back here often for Days Of Our Lives spoilers, updates, news, and rumors!