The Bold And The Beautiful Spoilers: Wednesday, October 2 – Shauna Makes A Confession – Brooke Demands Answers From A Guilty Ridge 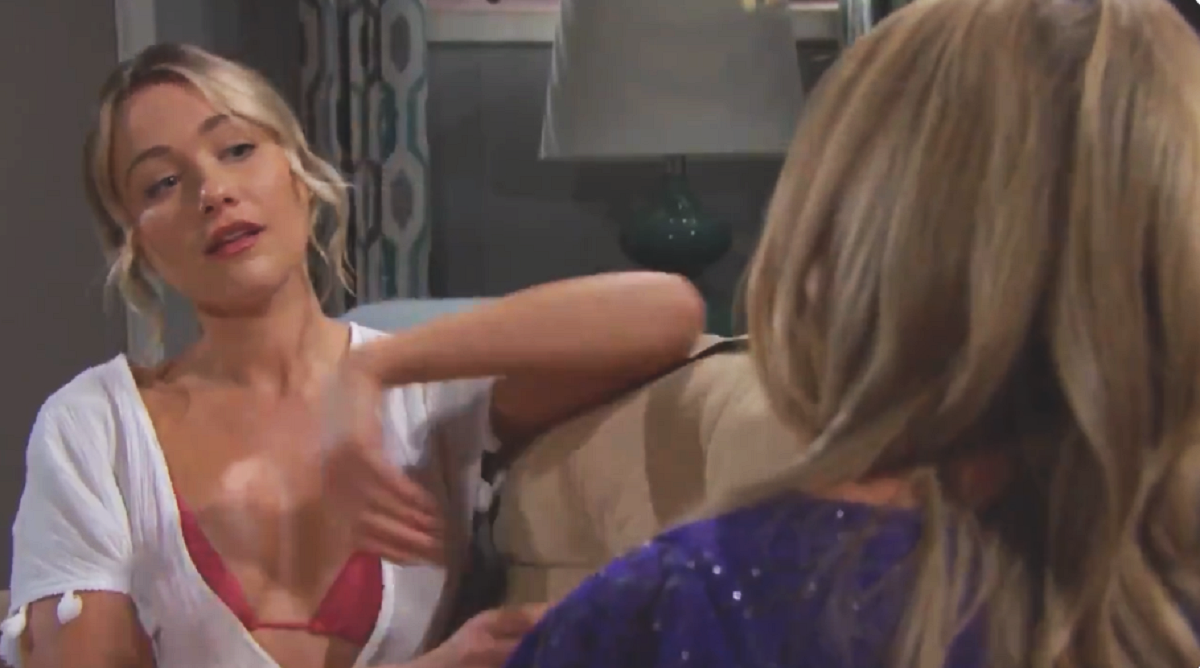 The Bold and the Beautiful (B&B)  spoilers for Wednesday, October 2, tease that Shauna Fulton (Denise Richards) will make a confession. As B&B viewers know, she recently spent the night with Ridge Forrester (Thorsten Kaye) in the room above Bikini Bar. Ridge was terribly drunk, and she took the opportunity to cuddle right up next to him as he was passed out on the bed. She enjoyed her evening and even planted a big kiss on him as he was passed out.

According to B&B spoilers, Shauna will confess the circumstances surrounding the kiss to someone, and likely this will be her daughter and confidante, Flo Fulton (Katrina Bowden). Shauna previously told Flo about her night cuddling and sleeping next to Ridge and how wonderful the whole thing was. But it seems that on Wednesday’s episode, she’ll let Flo know that she also kissed Ridge while he was passed out drunk.

Of course, that news will surely infuriate Flo. Flo doesn’t want her mother mixed up with Ridge or fantasizing about him, because it could seriously interfere with her plans for getting back in with the Logan and Forrester families. What Flo wants more than anything is to reunite with Wyatt Spencer (Darin Brooks), and she knows that she needs to remain drama-free and very repentant for that to happen.

Shauna getting all cozy and stealing kisses from Ridge when he is too drunk to consent won’t really mesh with Flo’s plan to make nice with the Logan and Forrester families. Flo will probably be worried that if what Shauna did ever comes to light, then both she and her mother will look worse in these families’ eyes. It’s definitely a reasonable thing to be worried about.

The Bold and the Beautiful Spoilers: Annika Noelle and Scott Clifton Look Back on the Beth Reveal https://t.co/ubIT7W7HzE pic.twitter.com/4k4QG7WfNG

Meanwhile, on Wednesday’s new episode of B&B, Brooke Forrester (Katherine Kelly Lang) will be on the warpath. As B&B viewers know, she’s just found out from Danny the bartender (Keith Carlos) that Shauna spent the night with Ridge in the room above Bikini Bar. Needless to say, Brooke’s not happy about this development, and that’s just the way that Thomas Forrester (Matthew Atkinson) wants it.

The Bold and the Beautiful viewers know that Thomas set up the whole scenario in which Danny “accidentally” spilled the beans to Brooke. It’s all part of Thomas’ plan to rid his family of the Logan women for good. He wants to break up “Bridge” and he’s well on the way to doing so, since Brooke is now seriously angry with Ridge for concealing the truth about that night.

On Wednesday’s episode, look for Brooke to demand answers from Ridge about (a) what happened that night, and (b) why he concealed who he was with. Of course, Ridge is going to have a tough time explaining himself, since he really doesn’t remember what happened. He’ll probably try to say that nothing happened, but since he has no memory of his time with Shauna while he was blacked out, Brooke might not be too convinced.

The Bold And The Beautiful Spoilers: Brooke Learns Ridge & Shauna Spent The Night Together — End Of Bridge?

Plus, since Brooke doesn’t trust Shauna, she might suspect that something happened that Shauna just isn’t admitting to…which would be true since there was the kiss and the cuddling that occurred. At any rate, it looks like Ridge is going to have a difficult time trying to explain himself, and Thomas’ grand plan to drive a wedge between the two is going to work perfectly.