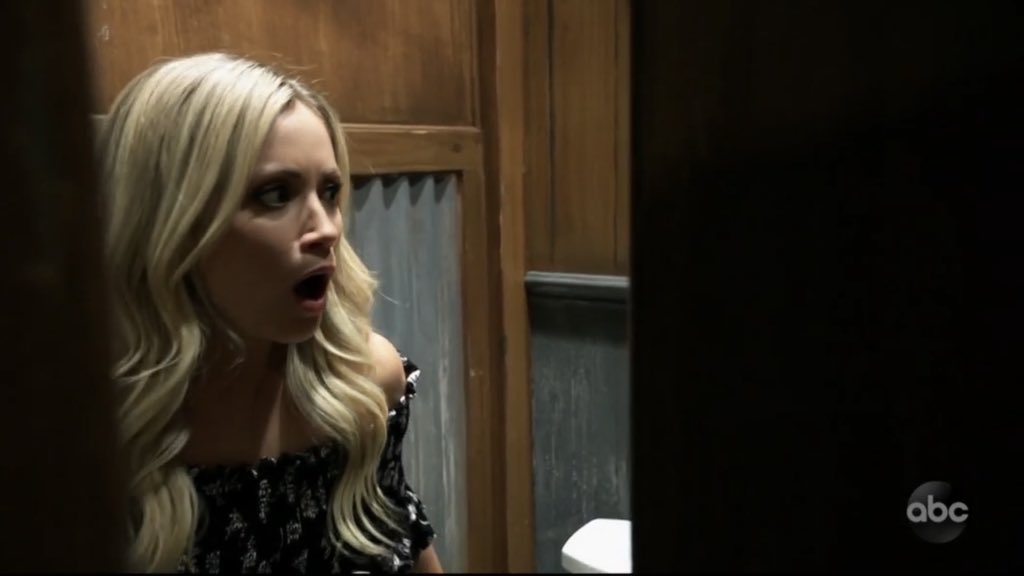 General Hospital (GH) spoilers tease another exciting episode that will be airing on Thursday, October 3rd! Promos for tomorrow show the excitement is building as we close in on the wedding of Nina (Cynthia Watros) and Valentin (James Patrick Stuart). Most of the action takes place at the Floating Rib where both the bachelor and bachelorette parties ended up after other arrangements hit a snag!

Lulu (Emmy Rylan) runs into Dustin (Mark Lawson) and expresses that she just overheard that someone is lying to someone they love. Viewers will recall that at the end of Wednesday’s episode, Lulu overheard Sasha (Sofia Mattsson) and Obrecht (Kathleen Gati) discussing the fact that Sasha isn’t really Nina’s daughter. Lulu will no doubt be floored by this information and will no doubt ask for Dustin’s opinion. She probably won’t reveal and specifics, but hopefully, Dustin will be able to counsel Lulu on what, if anything she should do with the explosive information.

Meanwhile, it looks like Sasha and Leisl’s discussion today will continue into tomorrow and it looks like things between the two get a bit heated with the Doctor reminding Sasha that she is an imposter! Sasha already feels awful about this whole situation so this will only compound her guilt. Will Leisl push Sasha into revealing the truth sooner than planned?

Elsewhere in the Floating Rib, Jax (Ingo Rademacher) arrives and he has peace on his mind. He will no doubt wish Nina and Valentin nothing but the best and will hope that this wedding will begin a much better working relationship between Jax and Nina and peace with her soon to be husband. It’s probably not going to happen but the sentiment will surely be appreciated.

At the bar, Ava (Maura West) is sitting and doing what Ava does, drinking her sorrows away. Michael (Chad Duell) is there as well, and informs Ava about the birth of his new little sister, Donna Corinthos! This will surely push Ava’s buttons, reminding her of her own daughter’s recent death. It remains to be seen how Ava will react, but if history is any indication she will have a few nasty words about the situation.

Finally, we see Sonny (Maurice Bernard) entering Carly’s hospital room. Carly asks, “Is It Over?” This is no doubt about baby Donna’s surgery. As viewers know, Donna was diagnosed with spina bifida and required surgery as soon as she was born to repaid as much damage as possible. This has surely been a long wait for the new parents, so hopefully, Sonny will have good news! Thursday, October 3rd is going to be another exciting episode so be sure to watch General Hospital tomorrow and every weekday on ABC! And don’t forget to check back right here for all the latest news!