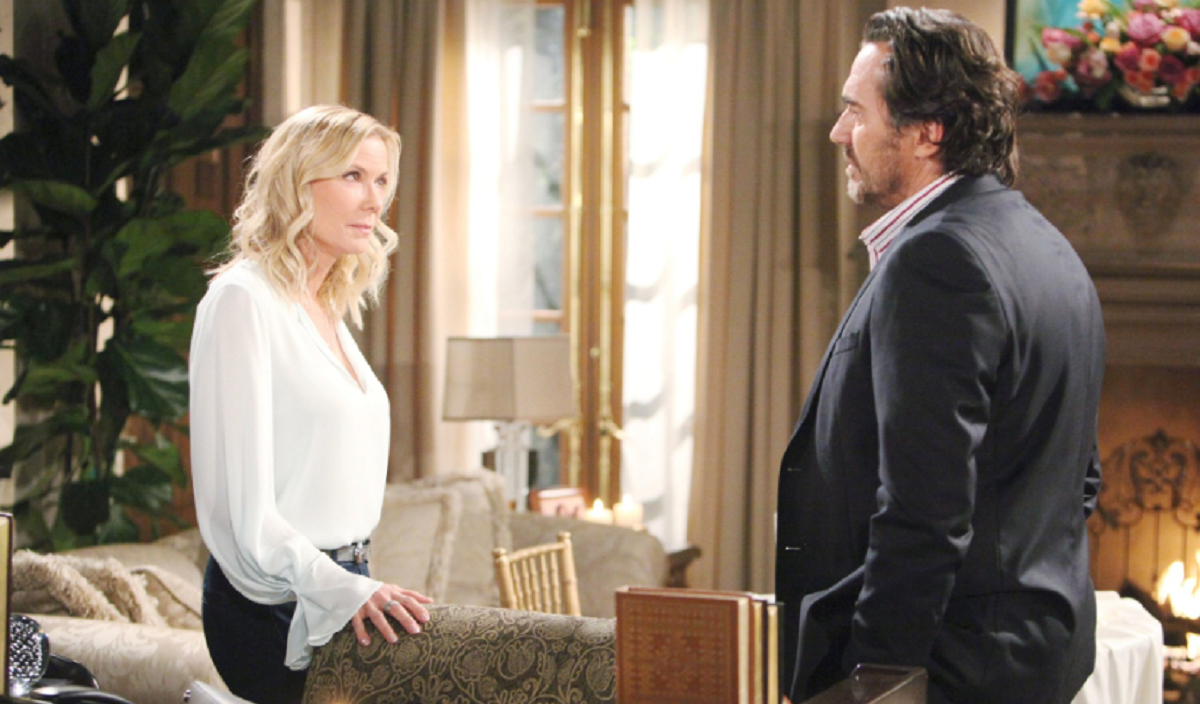 The Bold and the Beautiful spoilers document that Brooke Logan Forrester (Katherine Kelly Lang) has more to worry about than Thomas Forrester’s (Matthew Atkinson) threats. The revelation about the time her husband spent with Shauna Fulton (Denise Richards) establishes an increasingly negative dynamic that directly threatens the future of her marriage.

Brooke is painfully aware of Ridge Forrester’s (Thorsten Kaye) near blind spot, which blocks most moral vision of Thomas. Now, her erratic stepson’s manipulation of a hopeful Forrester Creations model reveals a supposed truth regarding another poor decision Ridge recently made.

Thomas was irked when Vincent Walker (Joe Lo Cicero) called him from Bikini Bar, where a delicious plate of nacho’s were being sampled. Atkinson’s darkening character had just told Brooke off, after she refused to accept his foolish logic.

Bold And The Beautiful Spoilers – Nothing Happened At The Bikini Bar

Brooke couldn’t believe what she was hearing – Thomas actually feels he should simply be given another chance to reclaim his life. But in Thomas’ mind, all of his thoughts make perfect sense.

The Bold and the Beautiful Spoilers: Is Douglas’ Mental Health In Danger – Should He See A Counselor?

Jumping off a story Vincent heard from Danny (Keith Carlos), Thomas is thrilled to be spreading rumors. Thomas also doesn’t have the guts to tell Brooke what he thinks he knows. So, he asks Danny to pass along the story.

It was encouraging to see Brooke and Ridge talk through their family problems after arguing. Having some time to settle down, both halves of Bridge thought they’d reached an understanding. They would rely on their love for each other in dealing with the fallout of the Beth Spencer (Madeline Valdez and River Davidson) reveal and Thomas’ fall off the cliff.

Bold And The Beautiful Spoilers – Bridge Has Already Begun To Crumble

However, Ridge’s choice to withhold information from Brooke about Shauna helping him at Bikini Bar, on the night where he downed far too much liquid fixer, was a major mistake. Sure, he wasn’t initially aware of being taken to the second floor room to sleep off his condition, or that Shauna happily served as his caretaker. But realizing what took place the next day and then not telling Brooke the full truth set up the classic soapy conundrum.

Of course, Brooke would have been angered by Ridge’s tell. But in not coming clean, Ridge surrendered the benefit of the doubt.

Thomas is sneaky, as he seeks reprisal against Brooke and the Logan family. Shauna’s devious in her pursuit, though the efforts are more veiled.

Shauna’s desire to be Ridge’s confidant plays the waiting game, as she hopes, or calculates, that Brooke’s troubles with Ridge will deepen. Thomas couldn’t care less that he’s provoking unnecessary drama for his dad, as all he continues to care about is his own agenda.

The Bold And The Beautiful News: Aaron D. Spears Lands A New Gig — Will It Affect Justin Barber’s His Time On B&B? https://t.co/gIWpZPnHJR pic.twitter.com/PqlmBvFzKc

For the moment, Thomas and Shauna are pleased because they believe their efforts are leading to success. But any person who aims for the downfall of others will likely go down as well on B&B.