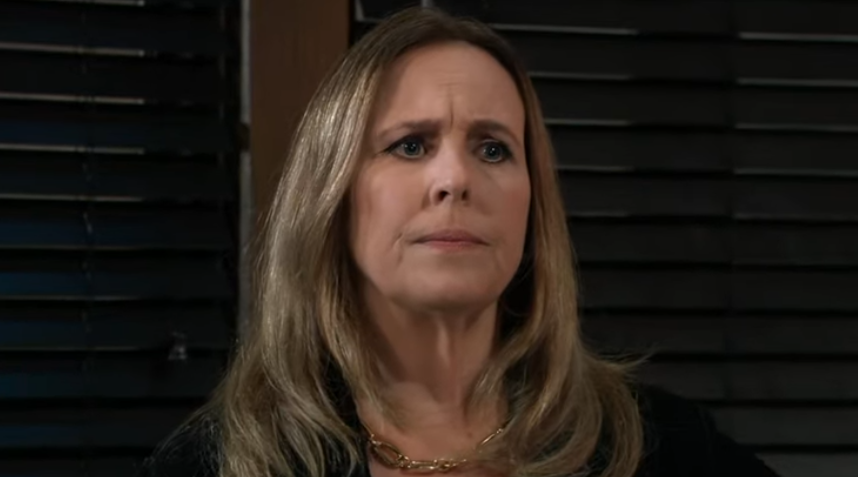 General Hospital (GH) spoilers indicate that Helena’s (Constance Towers) sick sense of humor is on full display, even in death! As viewers recall, Laura (Genie Francis) and Kevin (Jon Lindstrom) spent the night at Wyndemere to babysit Charlotte (Scarlett Fernandez). They chose to watch her there in order to search for the codicil to MIkkos Cassadine’s will. It looks as though they have found a huge clue, if not the codicil itself. And in true Helena fashion, it appears that Helena’s portrait is the key!

General Hospital Spoilers – It Was Hung In the Trophy Room

Weeks ago, when Hayden (Rebecca Budig) was searching the Trophy Room at Wyndemere, the portrait was hanging on the wall. Hayden was obviously creeped out by it and she wasn’t alone. Charlotte admitted to Kevin and Laura that she too was uncomfortable with Helena’s portrait staring down at her with those judgmental eyes so Valentin (James Patrick Stuart) had it taken down. Laura recalled that Helena willed the portrait to Nikolas (last played by Nick Stabile) with a statement that said the portrait represents “unfinished business” between Nikolas and Helena. Laura wondered aloud if that could be connected to the codicil!

So while Laura tucked Charlotte in for the night, Kevin examined the creepy picture and once Laura returned, he informed her that he found something! While its possible he located the codicil itself, it seems more likely that the portrait is itself a map or code! Kevin snapped a photo of the portrait for further study. As Kevin and Laura spoke, he reminded her that he is an accomplished cryptologist!

Once Kevin clues Laura in about his discovery, look for the two of them to get to work deciphering whatever secrets Helena’s portrait holds! Could it be some sort of elaborate treasure map? Is it somehow a coded message? Could it be the codicil itself? The search is just beginning so look for the hunt for the codicil to heat up. Shocking revelations are just around the corner!

GH Spoilers – Do You Think The Codicil Exists?

Do you think the codicil is real? Or is it just a hoax or wishful thinking? If it is real, where do you think it’s hidden? One thing is for sure, with Laura and Kevin and half of Port Charles now searching for it, the quest for the codicil is going to bring adventure and mystery to Port Charles. Watch General Hospital weekdays on ABC and to see who find the codicil!