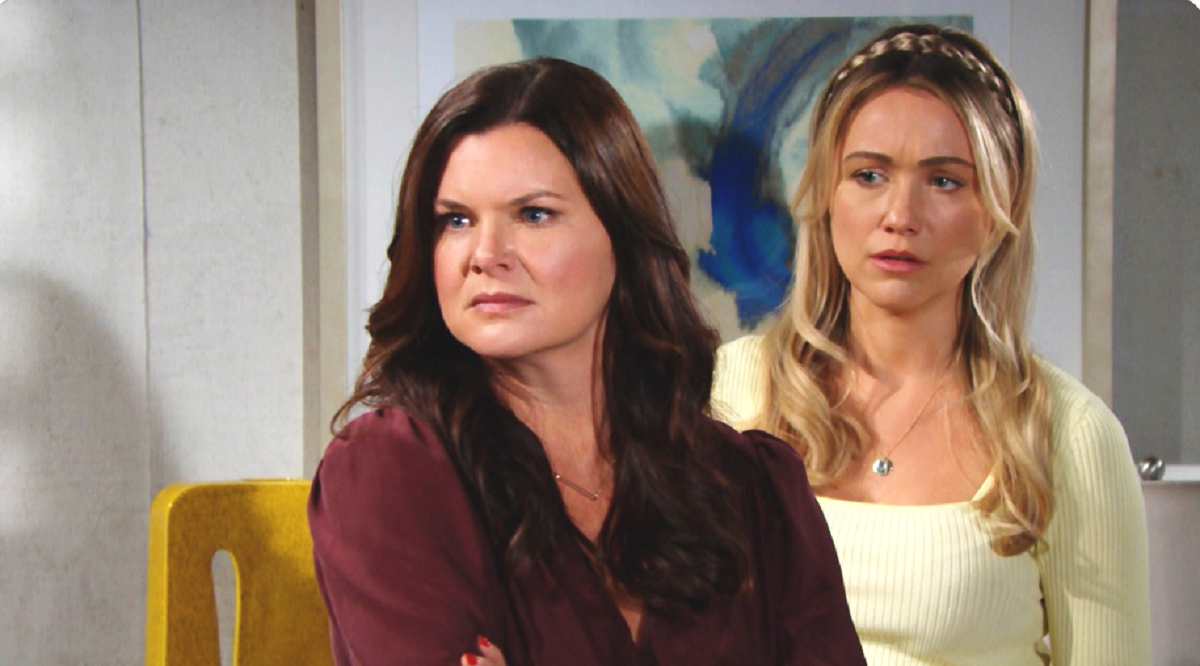 The Bold and the Beautiful (B&B) spoilers tease that Flo Fulton’s (Katrina Bowden) knowledge of her aunt’s need for a kidney transplant appears to signal the soapy setup. Knowing that Bowden’s character has been written into a corner, what better way to get her out than to make Flo a hero.

Daytime plots aren’t that simple, including ones produced by this last broadcast network soap that’s only half an hour. While plots are pushed hard and nearly every week a cliffhanger type episode is shown, B&B fans are right to think that Flo will become Katie Logan’s (Heather Tom) kidney donor match very soon.

Katie’s heart is actually her brother’s. Longtime fans had their memories refreshed through classic scenes where Storm Logan (William deVry) voluntary donated his heart which enabled her initial transplant surgery. Newer fans gained deep insight into the Logan family dynamic as a result.

The Bold And The Beautiful Spoilers: War Brewing Between Thomas And Brooke — Someone’s Going Get Hurt!

Bold And The Beautiful Spoilers – Storm Logan’s Daughter Comes Through

Wyatt Spencer’s (Darin Brooks) persistence led to Flo apparently learning Storm was her biological father. That knowledge has apparently never been fully verified, as the only proof of her genetic tie involved viewers seeing (along with the characters) percentage results on a website, with Storm as the leading paternal candidate.

If Flo is Storm’s daughter, then she would qualify as a blood relative. The next step is determining if she’s the match Katie needs, which Flo just learned about through her mother.

Sure, Shauna Fulton (Denise Richards) is a bit uncouth and she did give Flo totally misguided advice about the baby swap and conceal. However, Shauna means well.

Bold And The Beautiful Spoilers – Shauna Fulton Believes In Her Daughter

When Flo was at her lowest point, while wallowing in jail, Shauna didn’t give up on her. The conversation she had with Ridge Forrester (Thorsten Kaye) also partially impacted his decision not to fight Flo’s immunity deal.

While Flo feels embarrassed by her mom, as times, Shauna is her biggest advocate. She continues to reinforce that Flo is a good person and that opportunity will arrive. Well, Shauna’s optimism represents good parenting and Flo’s chance to do right appears to be arriving.

A recent scene showed Flo talking with Sally Spectra (Courtney Hope) at Bikini bar, where Bowden’s alter ego returned to work after being kicked out of Forrester Creations. Her newfound family’s shunning was primed to continue indefinitely as Flo was told off by various people, including, likely tellingly, Katie.

It would seem hard to imagine that B&B would allow Flo, who gained such prominence after arriving in Los Angeles, California, earlier this year, to languish in the bar setting indefinitely. Wyatt’s lack of anger toward her, also indicates that the former high school sweethearts aren’t done yet either.

Before Wally can be challenged, though, Flo needs a meaty arc to redeem herself. Katie’s life-threatening condition projects as the type of uplifting storyline Bowden’s character needs.