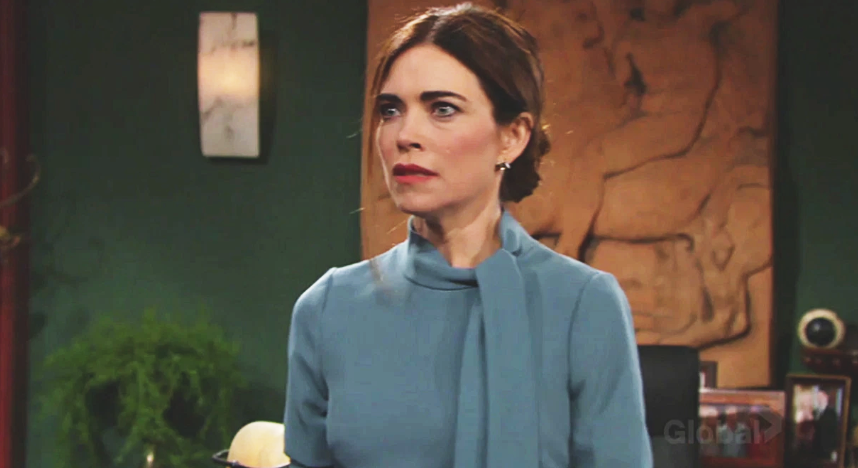 The Young and The Restless spoilers for Monday, October 7 tease of another exciting episode full of drama and confrontations for Y & R viewers!

Victoria is still upset by being the last to know that her father, Victor Newman (Eric Braeden) planned to return to Newman Enterprises as CEO and demote Victoria to COO, through the news instead of him telling her first. Victor had explained that he meant to, but a someone at Newman had leaked the news first.

Young And The Restless Spoilers – An Angry Victoria Newman Storms Out

Nikki Newman (Melody Thomas Scott) arrives and wants to talk to Victoria, but she’s busy chatting up a client. Victor arrives, and he confirms he’s returning as CEO when Victoria approaches the person with the question about the rumor. Victoria is hurt, and angrily storms out, returns to Newman Enterprises, and spears her father’s portrait with a letter opener and tells it he’s not getting away with it this time!

Prior to arriving at the Grand Phoenix, Devon and Elena talk about the challenge to Katherine Chancellor’s (Jeanne Cooper) will. Devon is concerned because he hasn’t heard from Cane Ashby, (Daniel Goddard) who had flown to Las Vegas the night before to look for Chance Chancellor (John Driscoll).

Chance had supposedly overnighted the photocopy of “the real will” to Amanda Sinclair (Mishael Morgan). Cane also intended to look for Adam Newman (Mark Grossman), who he suspects is in on the scam, since he knew that Adam and Chance had connected in Las Vegas before Victor brought Adam back to Genoa City.

Jack didn’t like that Victor and the rest of the Newmans thought it was okay to play with her emotions, especially emotions of grief. Then Victor shows up and explains the reasoning behind his wild plot to control Adam and to teach him a lesson.

Summer storms out and then Jack and Victor have a little conversation; Jack didn’t appreciate being left out of the loop either, and Victor responds he didn’t have the luxury of worrying about the hurt feelings of others at the time; he doesn’t hate Adam and was trying to protect himself and the rest of his family. Victor leaves.

Young And The Restless Spoilers – Abbott Siblings Start Their Book

Now that Victor and Summer have left, Jack and Traci get started on the family book, first going over some family history and memories. Jack is explicit about wanting the book to show the real Abbotts, faults and all, and to include Dina Mergeron (Marla Adams) but only if she is treated with respect in the book.

Young and the Restless POLL: Is Chelsea Being Too Hard On Nick? Vote Now! https://t.co/vELfBr6FCs pic.twitter.com/Cck9Klk5AC

Jack feels bad about the way he acted towards others in the past, and compares his romantic history with his mother’s affairs. Traci thinks Dina would like it if she knew Jack never meant to hurt John Abbott (Jerry Douglas), their father. They sit down and start to write the first paragraph of the book.