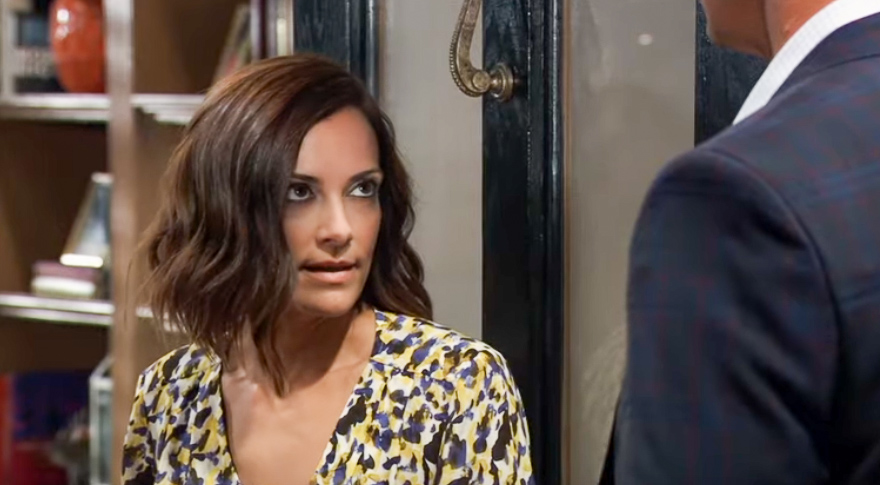 As General Hospital viewers will recall, the wedding of Valentin Cassadine (James Patrick Stuart) and Nina Reeves (Cynthia Watros) was dramatically interrupted by Lulu Spencer’s (Emme Rylan) announcement that Sasha Gilmore (Sofia Mattsson) was not Nina’s real daughter! Nina had invited Jax to the wedding at the last minute so of course he witnessed all this.

While Jax and Hayden are still trying to find the codcil to Mikkos Cassadine’s (John Colicos) will that would prove Valentin is not the true Cassadine heir, anything that could distract Valentin from their efforts is welcome, and this certainly was a distraction! Meanwhile, Laura Collins (Genie Francis) and Dr. Kevin Collins (Jon Lindstrom) found some significant clues in the large painting of Helena Cassadine that had been removed from the trophy room that could lead to the location of the codicil; they did determine that it was somewhere on Spoon Island, which is where Wyndemere is located! Jax will update Hayden on the events surrounding the wedding and anything he has learned from Curtis Ashford, (Donnell Turner) or Laura Collins (Genie Francis) about the clues in the painting.

In the next week or so, Jax does get a little busy with family issues and might have to step back just a bit from the search and his focus on it. General Hospital viewers already saw him focus on Hayden’s family issues, shaming her over not telling her ex-fiance Dr. Hamilton Finn (Michael Easton) about their little girl! Little does Jax know she hasn’t even told her sister, Elizabeth Baldwin (Rebecca Herbst) about her and Finn’s little “Honeybun!” Jax has had to deal with moving his daughter, Josslyn Jacks (Eden McCoy) into his home after she admitted Dev Cerci (Ashton Arbab) wasn’t Sonny Corinthos’ (Maurice Benard) cousin, coming down hard on Sonny to take in a “stray” when Joss was living in the house and possibly vulnerable, and then of course all the day to day goings on doing his job at Aurora Media.

He’s had to run the whole thing, in the absence of Drew Cain (Billy Miller) and Sam McCall (Kelly Monaco) turned him down when he asked her. Legal issues will continue in any attempt by Jax to buy out the other half of Aurora that Drew was running until he either gets Sam to sign off on it or Drew miraculously shows up to run it again, which is at this point highly unlikely.

Longtime viewers have undoubtedly noticed that Spencer Cassadine (Nicolas Bechtel) has been showing signs of growing up to be a bad boy, hacking into the voting machines the night of his grandmother’s election as Mayor of Port Charles, for instance. Laura, however, still has control of Spencer’s guardianship and he’s not old enough for her to not be able to control financial assets for him.

He would have to be twenty-one years old and Laura would probably like to amend that to forty-one years old, but she can’t! Therefore, whatever is found, the codicil itself or other proof that would throw Valentin out on his ear, will be in Laura’s control, not Hayden’s, and not Jax’s!