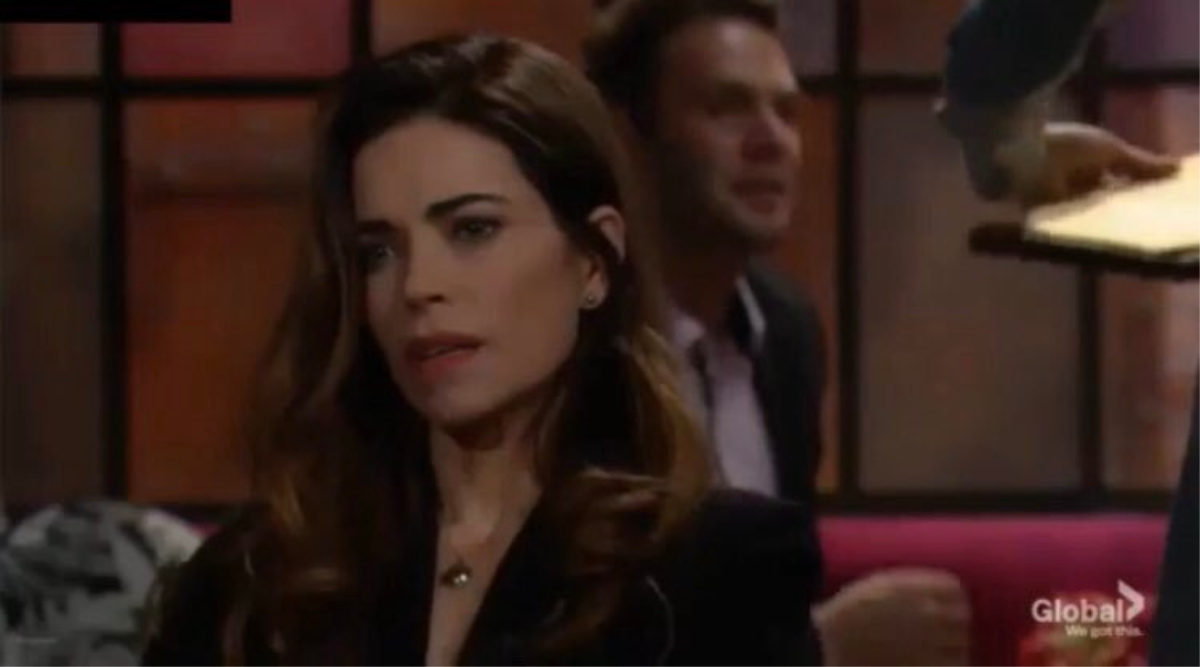 The Young and the Restless (Y&R) spoilers for Wednesday, October 9, tease that Victoria Newman (Amelia Heinle) will stand her ground. At Society, Victoria lets Billy Abbott (Jason Thompson) know she can’t return to Jabot. It’d be like taking a step backward, and that’s not what Victoria wants. She intends to pay Victor Newman (Eric Braeden) a visit and speak her mind.

At Newman Enterprises, Victor’s surprised by the letter opener Victoria threw into the portrait. Once Victoria appears, she explains she’s there to deliver her terms, not apologize. Victoria praises Victor has her hero and the man who’s taught her so much, but she feels it’s her time to shine. She pitches herself as Newman’s permanent CEO and warns there’ll be consequences if she doesn’t get her way.

Victoria points out that if Victor refuses, he should consider their relationship over. She contends that she can start her own company and fight Victor hard. In a stunning move, Victor is persuaded to hand the reins over for good. He calls Victoria her father’s daughter and insists she’s made him proud. The chair is Victoria’s now, so they share an emotional hug.

At Kyle Abbott (Michael Mealor) and Lola Abbott’s (Sasha Calle) place, they look for a house online and fail to pick one they approve of. The conversation shifts to Jabot, where Kyle’s feeling shoved aside by Billy. Lola convinces Kyle that he can use Billy’s behavior to his advantage. Jack Abbott (Peter Bergman) put both Kyle and Billy in charge, so he won’t appreciate Billy trying to push Kyle out.

Kyle sees potential in the idea of giving Billy just enough rope to hang himself. Lola feels like Kyle will look far better in Jack’s eyes by the end of all this. At Crimson Lights, Mariah Copeland (Camryn Grimes) arrives for an early meeting with Theo Vanderway (Tyler Johnson). He announces that he’s leaving Power Communications, so Mariah pumps Theo for info on why.

Theo lies that it just wasn’t a good fit, but Mariah reveals she already knows he tried to undermine her again. She’s aware Theo was fired, although he claims Devon Hamilton (Bryton James) overreacted. Mariah notes that she used to be like him, but that was a lonely way to live. She thinks it’s time for Theo to get a clue.

Afterward, Theo meets with Summer Newman (Hunter King) and explains his firing. Summer suggests that if Theo can’t work for someone like Devon, he can’t work for anyone. She gives Theo attitude, which he gives right back. Summer urges Theo to get over himself, but Theo snaps that maybe he’s not as evolved as her. They bicker until Lola and Kyle pass through, which brings Lola’s announcement to Summer.

Lola shares that Kyle plans to take charge at Jabot, but he cautions his wife once they’re in the kitchen. Kyle is confident in the path he wants for himself, but it may not be as easy as Lola expects. Next, Kyle makes his way to the office and chats with Summer. She encourages Kyle to focus on finding the perfect home with Lola and not let himself get too fixated on work. Summer did that and now has regrets.

In Las Vegas, Phyllis Summers (Michelle Stafford) is eager to hear what Adam Newman’s (Mark Grossman) cooking up. He denies having anything planned and feels there are benefits to living in Vegas. Phyllis understands that, but she still thinks Adam should pack his bags. She wants Adam to be a team with her again and help her take care of unfinished business.

Adam argues he doesn’t want to talk to anyone about anything besides cards. Phyllis decides to challenge Adam to a game of five-card draw. If she loses, she’ll leave. If she wins, Adam has to provide the answers she’s seeking. After Phyllis is victorious, she gets Adam to discuss his latest interaction with Victor. Phyllis thinks that’s great since Victor is emotionally vulnerable now and his guard is lowered.

Adam maintains that revenge isn’t something he’s interested in, but Phyllis doesn’t seem so sure. Before long, Cane Ashby (Daniel Goddard) shows up and leaves Phyllis intrigued. The Young and the Restless spoilers say some exciting scenes are on the way. We’ll give you updates as other Y&R news and rumors emerge. Stay tuned to see what else is ahead in Genoa City.