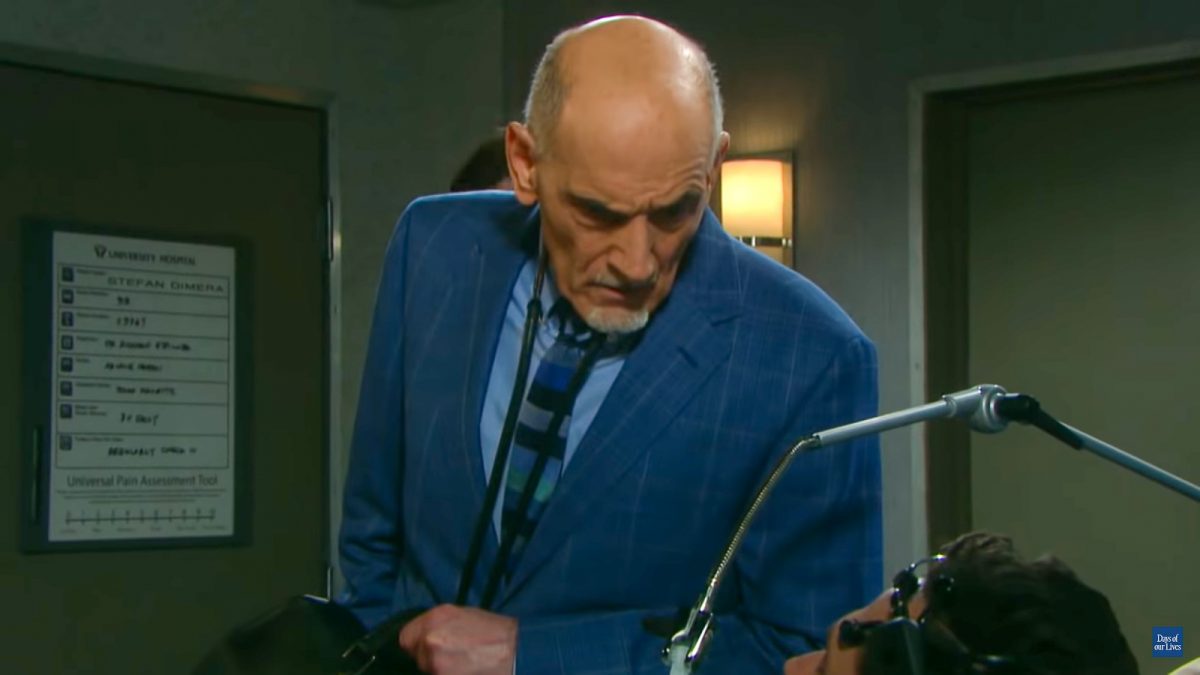 Days of Our Lives (DOOL) spoilers tease even though Stefano DiMera’s name has been mentioned a lot lately, the show isn’t going reverse it’s decision to never recast the part out of respect for the late Joseph Mascolo. That’s probably for the best as a recast wouldn’t feel like the real Stefano anyway. But that doesn’t mean he isn’t pulling the strings behind the scenes.

Why did Kristen DiMera (Stacey HaiduK) instruct Dr. Wilhelm Rofl (William Utay) to resurrect Vivian Alamaine (Robin Strasser) after she was shot by Kate Roberts last year. Recently, Viviam asked Kristen that very question! Kristen didn’t give her a straight answer. Vivian suspects that Stefano made that decision. And this could be true as Stefano is assumed to be alive and traveling the world. But of course, Stefano always comes back. And he does have some unfinished with a couple of Salem residents.

Stefano has been involved in just everyone’s storyline at one point or another. But his main purpose has always been about the same things. He enjoys challenging his opponent like they were playing a game of chess. It has always seemed like Stefano was several steps of most of his opponents. His first opponent was Roman Brady (Josh Taylor) but because of the identity issues John Black (Drake Hogestyn) had when he first came to Salem (everyone thought he was Roman for many years), his main foe became John and pretty much stayed that way. Although, Hope Williams (Kristian Alfonso) was the ultimately the person who brought an end to Stefano’s physical presence in Salem.

Days of Our Lives Spoilers – Hope Williams shot Stefano DiMera and everyone thought he was dead!

When Joe Mascolo decided to retire, his exit storyline that he drove Hope so angry that she shot and killed him, supposedly in cold blood. Eventually, Hope was tried for Stefano’s murder and went to jail for awhile. And that seemed like that seemed like Stefano’s final revenge. Eventually, Hope was released because Stefano turned up alive. But actually it was Shane Donovan (Charles Shaughnessy) disguised as Stefano in order to get Hope out of jail. Stefano was actually believed to still be dead. But since then, security footage was found that Stefano was alive!

Stefano has always returned to Salem because he is always working on ways to best his opponent. Whether is actually alive or dead is anyone’s guess. But what if Days found a way to bring him back without actually showing him? It’s likely he has concocted a final game between himself and John and he has spent the last few years working with people like Kristen and Rolf, making sure that everything is set up just right!

Days of Our Lives Spoilers – Is that why Dr. Rolf brings back Princess Gina?

Could Gina’s return be the first part of Stefano’s return and his final match with John Black? Gina and John have extremely complicated backstories and they have been romantically involved at one point. And by finally taking revenge on Hope by bringing back, Gina, and replacing Hope with her. Will Gina try to come between John and Marlena (Deidre Hall). And once everyone is led to believe that Rolf has replaced Hope permanently, Stefano could reveal his final game piece.

What if Bo Brady (Peter Reckiell) is being help somewhere by Stefano once again? Perhaps Stefano had been waiting to unleash him until Rolf was sure Hope was gone for good. And with Gina doing her part by distracting John causing all kinds mayhem with Rolf. And then Stefano does what he does best, he once again takes Marlena. That’s right there is one thing Stefano know is more passionate about than his enemies, and that’s his undying love of Marlena Evans.

Stefano won’t actually be see on screen ever again. But as all the pieces fit together finally, he could do all this through other people. Do you think Princess Gina’s comeback is Stefano’s plan. Could he have Marlena taken once again? A nd could Bo Brady be dropped into the middle of all this to add to all the chaos as well. One thing is for certain, if Gina does come back, do you want to see her try to come between John and Marlena. Days of our Lives is planning plenty of tricks and treats the rest of this month, so don’t forget to tune in every weekday on NBC and check back right here for spoilers and up to the date information!