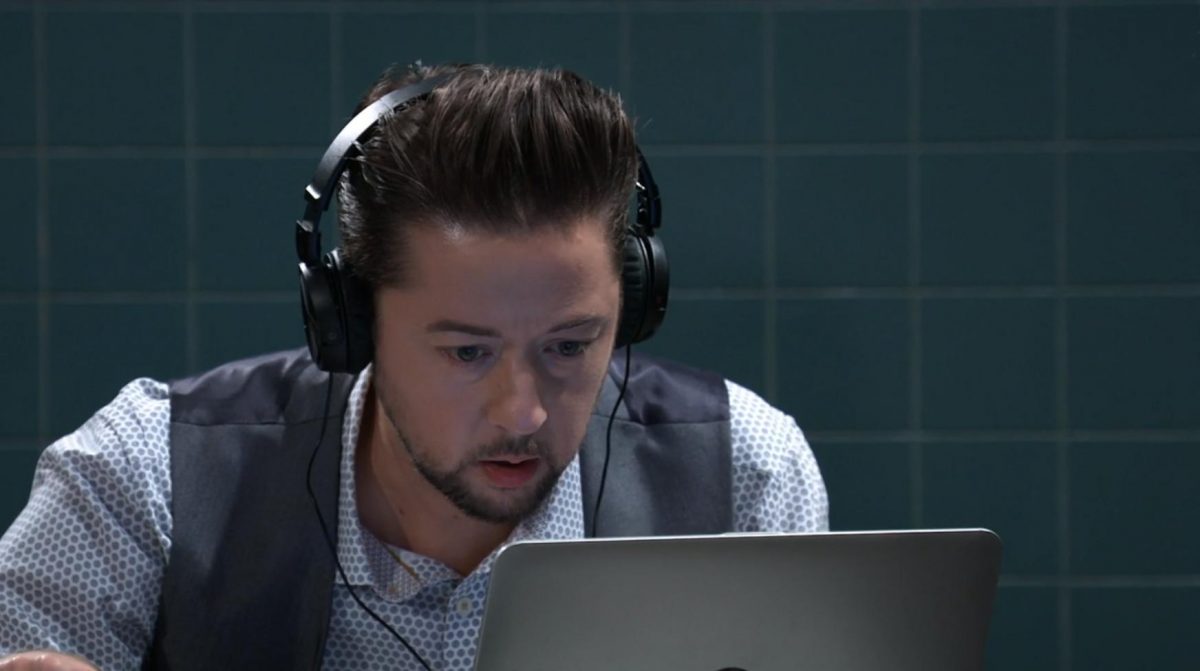 Spinelli is checking out the recording with other technicians. Robert Scorpio (Tristan Rogers) tells Jordan Ashford he spoke with Daisy Kwan (Kelsey Wang). Robert doesn’t trust Daisy or the nurse. Robert gets a call and has to deliver news in person. Spinelli calls Sam to the PCPD where Jordan informs her they are going to drop the charges because of Spinelli’s research.

Sam and Jason tell Sonny that Peter was walking around on the docks with a bag full of money. Sonny asks what the connection is between Peter and Shiloh. Sam talks about how much Peter means to Maxie. Jason doesn’t care if Peter is framing her.

General Hospital’s Maxie Jones (Kirsten Storms) leaves Nina Reeves (Cynthia Watros) a voicemail. Maxie then discusses Nina’s situation with Peter. Maxie tells Peter how great he is. Peter is worried that Maxie might not always feel that way. Maxie doesn’t believe Peter would ever betray her. Jason arrives and questions Peter about being on the pier.

Maxie mentions that Peter was there with a bag of money. Jason wonders what he is missing. Maxie tells Jason Peter was there to put a downpayment on an apartment. Peter claims to have lost the opportunity by giving Dev and Wiley a ride. Jason gets a call and learns Sam is free. Sam tells Jason they just brought in the guy who helped Shiloh escape as well. Jason tells Peter before heading to the PCPD.

Martin tells Kim that Drew is no longer Franco. Martin plans to save Drew from this procedure. Kim takes Martin to meet Franco. Franco is ready to go along with Martin’s plan. Kim and Franco talk about how Martin’s job is to convince the judge he is competent. Franco is worried about the toll this is taking on Kim. Kim tells Franco how much he helped her. Kim wants to start making plans, Franco stops her. Kim and Franco kiss.

General Hospital’s Monica Quartermaine (Leslie Charleston) stop by to visit Franco. Monica is sorry this happened to Franco. Franco accuses Monica of choosing Jason over him. Monica wishes she had gotten to work this out with Drew. Monica tells Franco that she didn’t want Jason at first. Franco tells Monica he should have reached out sooner. Franco believes things might have been different if he had gotten in touch if Alan Quartermaine were still alive. Franco wants to stick around and know Monica better. Robert approaches Monica at the hospital and tells her Drew will be declared dead shortly. Robert mentions how Drew is held in high regard with the Navy. Sonny runs into Robert and asks him to tell Dante about the baby. Martin approaches Monica about Franco. Martin wonders if Monica is ready to fight for her son.

General Hospital’s Liz meets with Scott Baldwin (Kin Shriner) about Franco. Cameron Webber (William Lipton) asks Scott to put him on the stand. Scott doesn’t want Cameron to let anyone know he was drugged. Scott wants the whole story of how Franco risked himself for him. Liz thanks Scott for letting Cameron testify. Scott says they are going to need something else. Liz wants to use Kim against Franco. Liz knows Kim wanted another child with Drew. Liz isn’t going to let Kim have Franco as a consolation prize. Liz tells Scott that this is war.