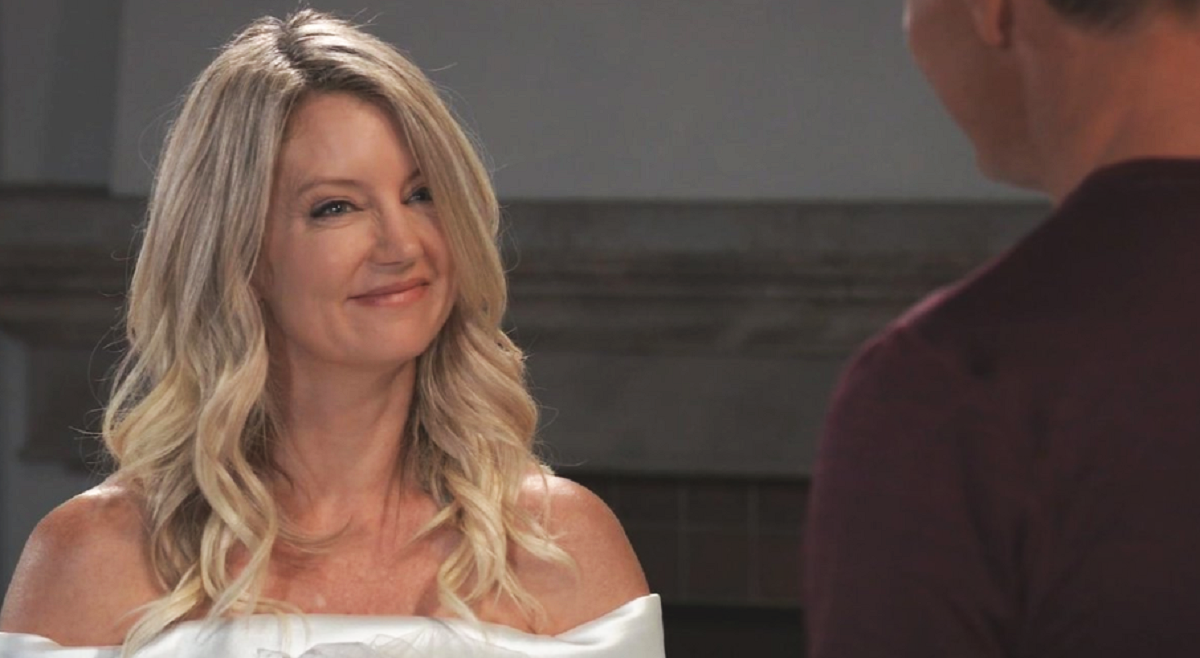 Nina can’t believe Jax let her sleep that long. Nina needs to leave. Nina tells Jax she should have listened to him. Nina doesn’t know what to believe. Jax only knows that Sasha confessed but didn’t say Valentin was involved. Nina can’t imagine being in the same room with Valentin. Jax gives Nina her phone, he charged it last night. Nina sees how many people have called.

Nina tells Jax she should go. Jax offers to let Nina stay to lay low for a little bit. Nina needs to face everyone. Jax advises Nina to take the time to process this. Nina says she wanted a child and fell hook, line, and sinker. Nina tells Jax this is her mess, she needs to learn how to deal with it. Nina needs to go to Windemere and get some clothes.

General Hospital’s Hayden Barnes (Rebecca Budig) and Hamilton Finn (Michael Easton) run into each other outside Kelly’s. Finn offers Hayden a sandwich for her dog. Harrison Chase (Josh Swickard) watching the exchange with Hayden. Chase asks Finn what that conversation was about. Finn thinks Hayden is lying to him.

Finn tells Chase about the finger painting as well as the dog. Chase offers to open a case jokingly. Chase tells Finn this has nothing to do with him. Chase things Finn is trying to fill a void with Hayden. Chase has to go back to the station. Chase tells Finn not to lose track of his priorities.

General Hospital’s Jason Morgan (Steve Burton) joins Sam McCall (Kelly Monaco) at the PCPD. Jordan Ashford (Briana Nicole Henry) is waiting on paperwork to get wrapped up and tells Sam to hang around. Jason tells Sam that Peter August (Wes Ramsey) supposedly had the cash to make an offer on an apartment. Peter’s hit-man is brought upstairs while sam and Jason are there.

The hit-man demands his phone call and calls Peter. The hit-man demands Peter comes to the PCPD before Jordan starts to question him. Peter tells the hit-man he needs a lawyer. Sam is ready to leave. The FBI shows up and says this is a federal matter. Peter gives the hit-man instructions and hangs up the phone. The FBI wants to review the evidence. Sam is told to not leave town. Chase tells Jordan the suspect is ready to talk. Jordan, Chase, and the FBI agent speak to Peter’s hit-man.

General Hospital’s Maxie Jones (Kirsten Storms) and Peter show up at the Crimson offices. Maxie hopes to find Nina there but she isn’t. Peter asks if Maxie really expected Nina to be there. Peter points out that they were right about Sasha Gilmore (Sofia Mattsson) all along. Maxie isn’t sure that Lulu Spencer (Emme Rylan) did the right thing. Maxie can see Liesl Obrecht (Kathleen Gati) being a part of this. Maxie questions why Michael Corinthos (Chad Duell) didn’t say anything. Charlotte Cassadine (Scarlett Fernandez) overhears Maxie say Sasha isn’t Nina’s daughter. Charlotte questions Maxie. Maxie apologizes.

Laura goes to speak to Curtis Ashford (Donnell Turner). Hayden joins Laura and Curtis. Laura tells Hayden that the location for the codicil seems to be Spoon Island. Curtis wants Valentin to pay hard and fast for what he did to Nina. Curtis wants Valentin to get his. Hayden promises Valentin will go down in the end. Hayden thinks losing the Cassadine Estate is payback for Valentin. Hayden asks Curtis to find her a dog.

General Hospital’s Michael and Sasha are sharing coffee. Sasha isn’t ready to face anyone right now. Sasha blames herself for this mess. Sasha doesn’t want to go back to Port Charles. Sasha wants to head back home. Sasha suggests Michael run for the hills. Michael is standing by Sasha’s side. Michael wants Sasha to tell the whole story.