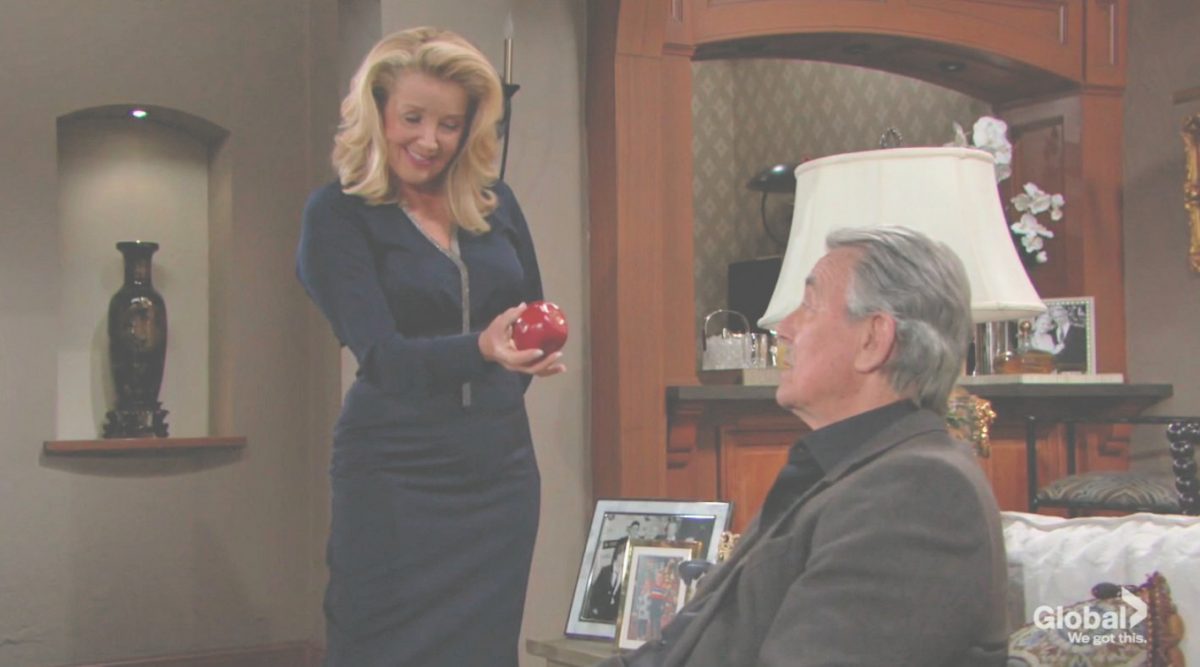 The Young and the Restless (Y&R)  spoilers for Friday, October 11, tease that Jill Abbott (Jess Walton) will remain perplexed over disappearing Chance Chancellor. At Society, Jill grumbles to Cane over the phone and contends Chance has to be somewhere. She learns Phyllis Summers (Michelle Stafford) as with Adam Newman (Mark Grossman) in Las Vegas and argues Cane can make Phyllis useful.

Afterward, Phyllis shows up to see Cane and suggests helping each other out. She’s still curious about this Chance bomb, but Cane doesn’t get why Phyllis is so wrapped up in this. She confesses she needs a way to get Adam back to Genoa City. Phyllis thinks this Chance connection could be the key.

Once a text comes in, Cane gets rid of Phyllis and reads what’s supposedly from Chance. The message reveals that it’s too risky to meet in public, so Cane’s given a time and place to meet – and he’s to come alone. Later, Cane shows up as promised and doesn’t see Chance anywhere. He gets knocked out cold and dragged away, so we’ve got a kidnapping underway!

The Young And The Restless Spoilers: Phyllis’ Talk With Amanda Revealing – Adam’s In Trouble?

Back in GC, Victor Newman (Eric Braeden) reflects on handing the reins over to Victoria Newman (Amelia Heinle) for good. Nate Hastings (Sean Dominic) comments on it being the end of an era. He exits, so Nikki Newman (Melody Thomas Scott) grills Victor about how he really feels. Victor admits he hates the idea of retirement. He reflects on what he’s giving up and ponders how to fill his days.

Nikki’s certain Victor will find something to keep him occupied. She’s eager to see what it is and reminds Victor she’ll always be by his side. Talk turns to Adam, so Victor notes that it would’ve been a mistake to hand over control of Newman to his son.

After Nikki heads out to the stables, Victor phones his Adam surveillance guy and calls it off. He believes it’s time to let Adam go and accept that he’s not coming back. Over with Elena Dawson (Brytni Sarpy), she arrives home as Devon Hamilton (Bryton James) digs for Amanda Sinclair (Mishael Morgan) info. Devon notes the lack of online presence for Amanda, but Elena points out he could hire an investigator.

Although Devon isn’t keen on doing that, he does have some good news to pass along. Devon’s learned that the statute of limitations has run out on the contesting the will. Elena’s relieved since it means Amanda can’t accomplish anything, but Devon isn’t done. He points out that he wants Katherine Chancellor’s (Jeanne Cooper) true wishes honored – whatever they may be.

Later, Devon meets with Jill, and Cane’s Vegas trip comes up. Jill understands why Devon’s suspicious, but she thinks he needs to address what’s ahead. Devon realizes Jill’s trying to figure out what he’ll do if Cane was supposed to inherit billions. Things get tense between them, so Jill stomps off.

Young & Restless Spoilers– Amanda Sinclair Worries She Is Getting Played

Devon also quarrels with Amanda in Friday’s episode. He feels confident that Amanda suspects what he suspects: that they’re both getting played. Amanda’s annoyed that Devon thinks he knows what she’s thinking. She assures him he doesn’t and argues there’s nothing left to say on the matter.

Over with Elena again, she opens up to Nate about her worries. Elena fears Devon’s fixated on Amanda and the will stuff because of Amanda’s appearance. She looks just like Hilary Hamilton (Mishael Morgan), so this has stirred up a lot for Devon. Nate offers a different take and assures Elena it’s all going to work out.

Meanwhile, Victoria talks to Billy Abbott (Jason Thompson) about taking the throne permanently at Newman Enterprises. She’s pleased, but part of her feels guilty to force Victor out. Billy’s glad Victoria was able to keep the top spot, but he admits he’s bummed they won’t be working together at Jabot. Victoria arranges to play with the kids in the park before they get steamy in a Grand Phoenix suite.

The Young and the Restless spoilers say another great episode’s coming up. We’ll give you updates as other Y&R details and rumors emerge. Stay tuned to see what’s next on the CBS soap.