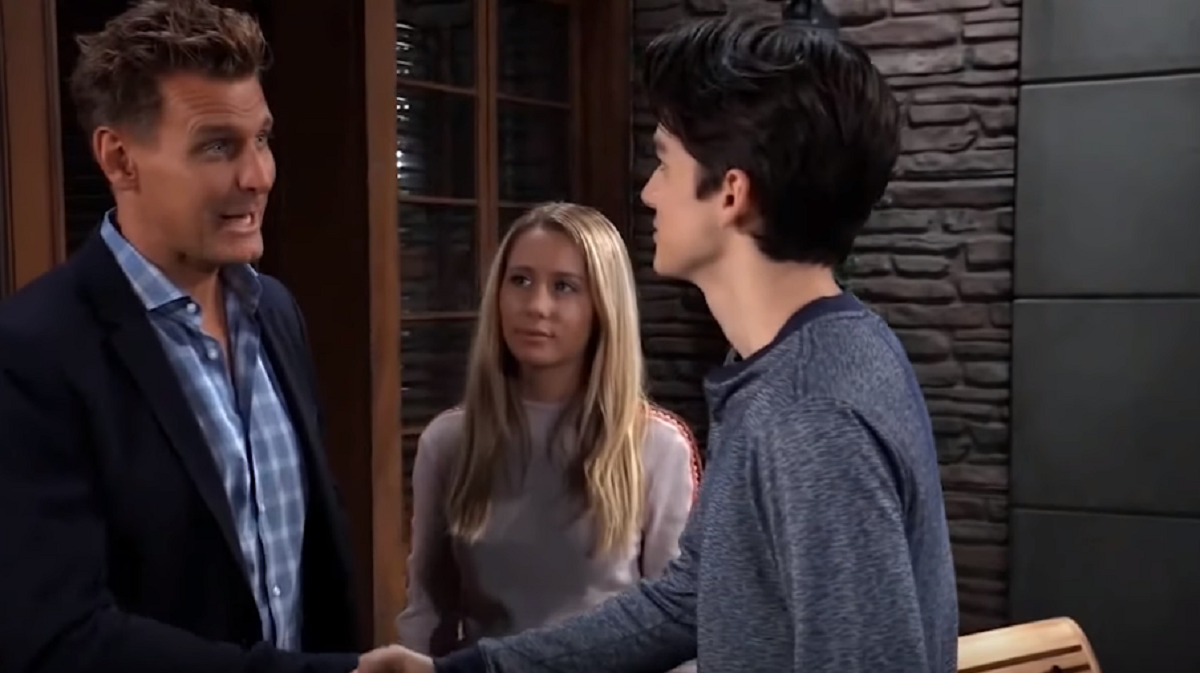 Sonny thinks Alexis has too much trust in Julian. Alexis goes to Julian’s bar. Julian shows Alexis flyers that Olivia is spreading around. Alexis suggests Julian finish the sell, he refuses. Alexis can only relay Julian’s concerns. Alexis suggests Julian change things up at Charlie’s. Alexis gives Julian more advise. Julian mentions Alexis’ boyfriend, she says she doesn’t have one and it’s none of his business.

General Hospital’s Sasha Gilmore (Sofia Mattsson) packs up her belongings from Crimson. Sasha asks if she should leave Nina a note but decides against it. Lucy Coe (Lynn Herring) shows up as Sasha is leaving. Michael Corinthos (Chad Duell) and Sasha need to go. Lucy wants to know if Sasha is the new face of deception or not. Sasha tells Lucy no.

Lucy thinks Sasha is joking. Lucy wants to give Sasha a stake in the company. Sasha tells Lucy she isn’t Nina’s daughter. Sasha says Lucy doesn’t want her associated with the company. Lucy believes they can make millions. Lucy keeps talking to Sasha. Lucy tells Sasha that punishing herself won’t help Nina. Lucy asks if Sasha has another job lined up. Lucy tells Sasha she has to live her life. Sasha has to be in people’s face to show her redemption.

General Hospital’s Nina shows up at Windemere to pick up some clothing. Valentin Cassadine James Patrick Stuart) asks why Jax is with Nina. Nina tells Valentin its none of his business anymore. Valentin tries to blame Lulu Spencer and Sasha for this mess. Valentin tells Nina all of this is his fault. Valentin says Sasha’s actions were her own. Nina tells Jax he can leave and she stays to talk to Valentin and Liesl Obrecht (Kathleen Gati).

Nina tells Valentin they are through and walks off. Liesl questions if Nina is sleeping with Jasper Jacks (Ingo Rademacher). Nina needs to know if her child being alive was a lie. Nina says goodbye, Valentin begs her not to leave. Sasha wants to make things right for Nina. Nina arrives and attacks Sasha. Lucy defends Sasha to Nina. Nina blames Sasha for losing everything. Sasha claims to have done this without Valentin’s involvement. Sasha says she got a call from the lawyer who handled her adoption. Sasha says the lawyer suggested she go along with the plan. Sasha says she needed the money and her lawyer did as well. Sasha tells Nina didn’t want to lose Nina. Nina tells Sasha she’s good but didn’t do this on her own. Nina says Valentin had to set this up. Liesl is afraid Nina will never take them back.

Liesl wants to go to Switzerland. Valentin plans to take Charlotte back to Greece. Valentin thinks his absence might make Nina’s heart grow fonder. Sasha tells Nina a friend from college helped fake the DNA tests. Sasha begs Nina not to cut out the two people who love her the most. Everyone leaves Nina in her office where she begins throwing things and then starts to cry. Sasha thinks Michael disagrees with her decision. Michael can’t agree with Sasha’s actions but can’t argue with her motives. Michael says Sasha is waiting for another lie to be exposed. Ava shows up at Crimson with a bottle of scotch.

General Hospital’s Josslyn Jacks (Eden McCoy) gives Dev Cerci (Ashton Arbab) all the homework he missed. Dev doesn’t think this is fair that he’s not allowed off the grounds. Dev mentions Jocelyn ratting him out to Jax. Jocelyn says she couldn’t keep lying to her dad. Jocelyn tells Dev that Jax wouldn’t do anything to hurt him because he doesn’t want to hurt her. Jax arrives at Sonny’s and asks if Dev is there. Jocelyn calls Dev a hero, he says that is Sam McCall.

Jocelyn wants to know where Dev was going. Jocelyn questions if Dev thought about who he would hurt by leaving. Dev asks Jocelyn if she would miss him if he left. Dev grabs Jocelyn’s diary and teases her. Sonny tells Dev he has decided not to contradict Sonny’s story. Jax thinks taking action would be counterproductive. Jax credits Nina’s wedding fiasco for his decision. Jax doesn’t want to stand in Jocelyn’s way of helping Dev. Dev thanks Jax for keeping his secret. Sonny says Dev is a Corinthos now and no one can change that.

General Hospital’s Brad has a meeting with Neil Byrne (Joe Flanigan). Brad says his father in law is his problem. Brad wants medication. Brad tells Neil that his child was kidnapped and he’s afraid it will happen again. Neil gives Brad a prescription and tells him they need to continue to talk. Brad promises to ask Lucas to come with him to therapy. Neil tells Brad the fear of his son being kidnapped again is unfounded. Alexis arrives as Brad leaves.