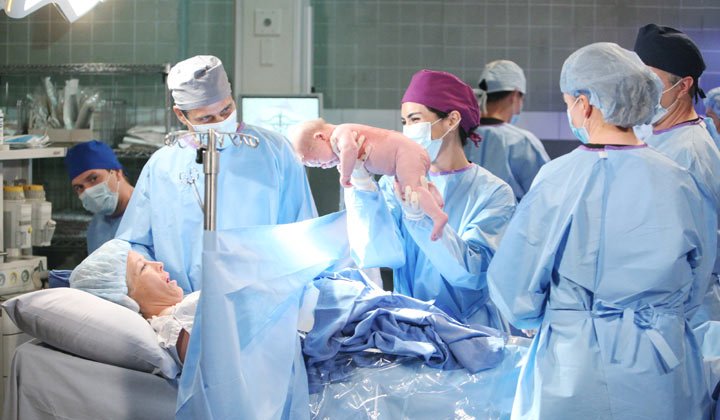 General Hospital (GH) spoilers tease that a joyous moment is coming very soon for Corinthos household. Very soon, Sonny and Carly Corinthos (Maurice Bernard and Laura Wright) will baby Donna home from General Hospital. After months of preparing for the worst because Donna was diagnosed with spina bifida early in Carly’s pregnancy, but after a surgery right after she was born, doctors are now optimistic that Donna will be healthy with little to no damage.

It’s still very early, and problems could possibly still occur, but it looks like they can breathe a sigh of relief. But after months worrying about what the future holds for Donna, it may not be easy for Carly to relax. Viewers may have noticed that earlier this week, Carly had a nightmare that Donna was crying and she was visibly upset. Donne was in the ICU so it was just a bad dream, but Carly insister that Bobbie Spencer (Jaclyn Zeman) go and check on her immediately. Of course, the baby was just fine but this could be a sign of troublesome things to come.

GH Spoilers – Where does all that worry go?

Carly won’t be able to just turn off her concerns after all these months but it’s likely that while trying to be perfect mom to this baby, Carly may become more and more on edge. Not wanting to leave Donna alone for any amount of time and not even trusting her closest family members alone with Donna, this could escalated into a huge problem. And there is another huge issue right around the corner.

If Nelle Benson (Chloe Lanier) does go free after her probation hearing, look for Carly to become even obsessed with keeping Donna healthy and safe. Nelle was pretty successful gaslighting Carly once before and she could probably do it again. A few well placed threats that seem harmless will set Carly off. Look for her to drastic action to make sure that Nelle comes nowhere near her or Donna.

Do you think Carly stressful pregnancy and concerns about Donna’s condition will cause Carly to be too overprotective of Donna. Will Nelle find a way to exploit this for her own ends. Hopefully all will go smoothly for Donna Corinthos and her mom, but in Port Charles, trouble is always just around the next corner so stay tuned to General Hospital weekdays on ABC and check back here regularly for news, updates and spoilers.