The Bold and the Beautiful Spoilers: Brooke Can’t Back Off – Will Love Keep ‘Bridge’ Together 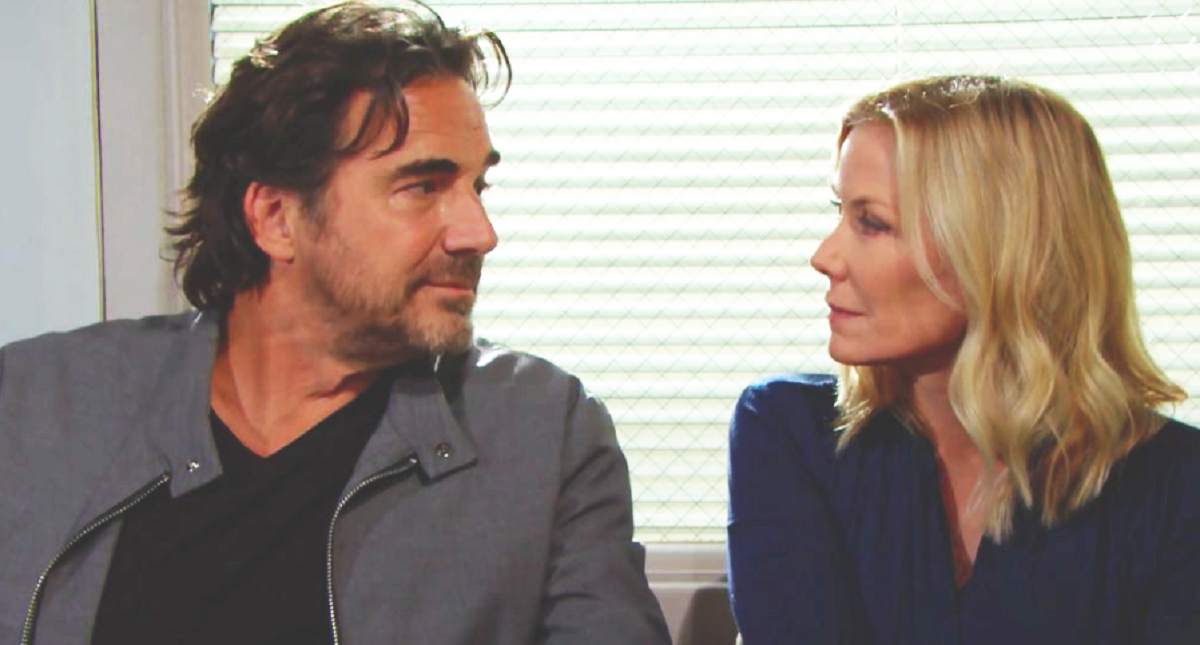 Brooke Logan Forrester (Katherine Kelly Lang) can’t back off on ‘The Bold and the Beautiful’. She feels it necessary to impress upon her mildly estranged husband that Douglas Forrester (Henry Joseph Samiri) should remain part of Hope Forrester (Annika Noelle) and Liam Spencer’s (Scott Clifton) reformed family.

Here’s the thing, Brooke is right and wrong. She’s totally right in believing, not just knowing, that Douglas is living with normal human beings now that he’s not connected to his father. However, Thomas Forrester (Matthew Atkinson) hasn’t done anything that can be proven which would likely result in his losing custody of Samiri’s well-played character.

Separately, Brooke doesn’t need to hammer home the idea that Thomas disqualified himself to be Douglas’ parental figure. Ridge Forrester (Thorsten Kaye) knows that his son has messed up, but believes that he wants to restore his reputation. Considering ‘Bridge’s’ separation, Brooke should let well enough alone for now.

Brooke has long fiercely fought for family. She’s also been involved in breaking up the family Ridge had with Taylor Hayes (Hunter Tylo). However, Steffy Forrester (Jacqueline MacInnes Wood) has sided with her stepmother in this instance. That tell to her dad should have impacted Ridge more than it did.

The Bold and the Beautiful Spoilers: Liam Getting Dangerously Close To Steffy, Hope Already On Edge!

The idea that Thomas isn’t mentally fit is something that Steffy didn’t see before the Beth Spencer (Madeline Valdez and River Davidson) reveal happened. But she sees it now and isn’t ready, as Steffy told her dad, to forgive her brother and offered no time table as to when that might happen.

Brooke is trying to help Ridge see reality, which is why she continues to push the Thomas issue. What Lang’s legacy character needs to be wary of is Ridge’s paternal instincts overriding his marital feelings.

Yes, Ridge and Brooke share a large family. But in this instance, Ridge is talking about his family, meaning Thomas and Steffy are his children and not Brooke’s.

Douglas is also Ridge’s grandson. On that point, Brooke doesn’t agree and feels that she has a right to determine what’s best for Thomas’ son because of all that’s happened.

The above conflict represents one portion of a major problem that Thomas created when he intentionally withheld knowledge of Phoebe Forrester actually being Beth. Brooke rightfully sees that as a heinous act that was committed against her daughter, Hope. The magnitude of Thomas’ amoral decision and the fact that no form of legal justice followed created the dispute that has already separated Brooke and Ridge.

Bold And The Beautiful Spoilers – Cloudy Forecast Ahead – Includes Risk

Due to the number of times Brooke and Ridge have been apart, after reuniting, there’s no way to know what will happen with their current marriage. A quick repair doesn’t fit the soapy script, as it would remove all the drama that’s projected to play out at least through the fall.

The Bold and the Beautiful Spoilers: Wyatt Thanks Flo for Saving Katie – Beginning of Them Getting Closer Again? @celebratesoaps #bb #Boldandbeautifulhttps://t.co/mcGhjdCheN

Of course, Shauna Fulton (Denise Richards) is a significant wild card that could change the game. Beyond that plot point, Ridge never revealed to Brooke what Thomas acknowledged about Emma Barber’s (Nia Sioux) death.

So, the weather forecast for Bridge remains cloudy. Since they’re already separated, the risk of an extended time apart also means that love, which isn’t in doubt, might not be enough to bring Brooke and Ridge back together. This site is a leading source for everything linked to ‘The Bold and the Beautiful’.