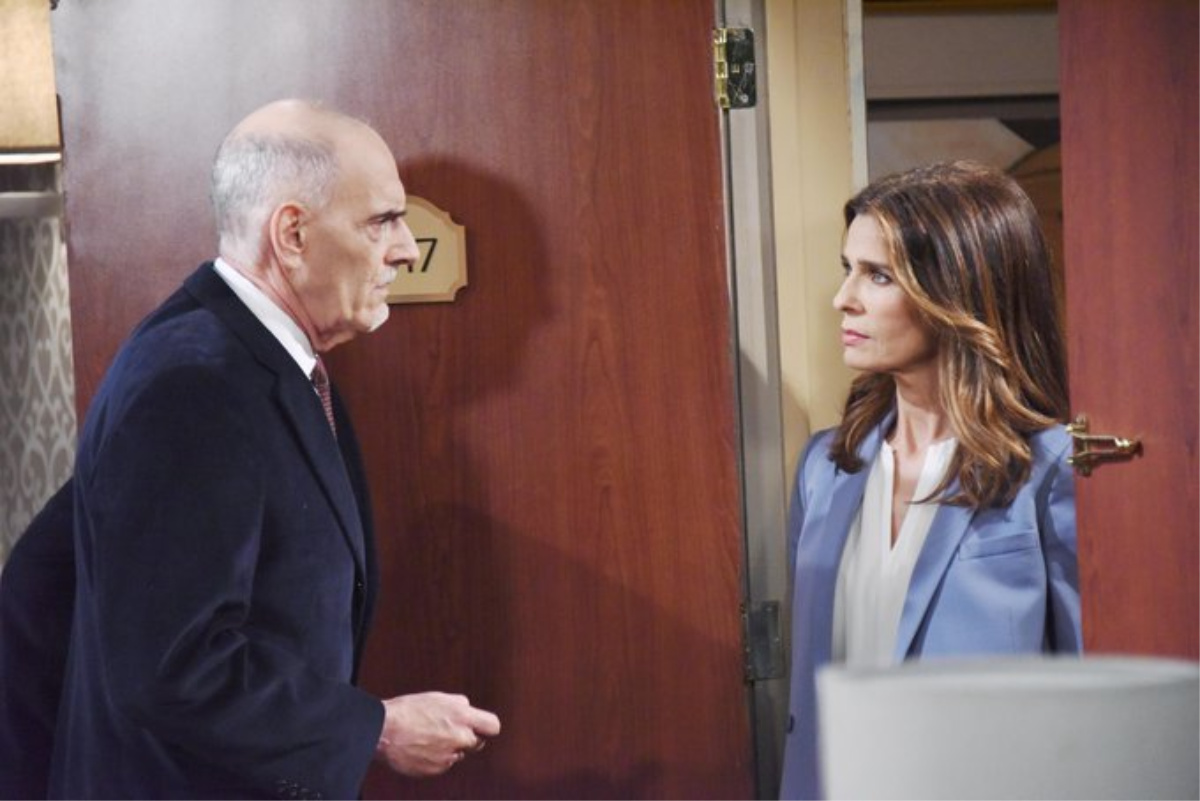 Days of Our Lives (DOOL) spoilers for Tuesday, October 15, tease that John Black (Drake Hogestyn) and Marlena Evans (Deidre Hall) will get updates on Brady Black’s (Eric Martsolf) recent decision. DOOL viewers know Brady pushed Kristen to move in the Kiriakis mansion, and he obviously didn’t have to push very hard! Kristen’s thrilled over this chance to get closer to the man she loves.

Of course, that’s exactly what John and Marlena will be afraid of. Days spoilers say they’ll mull over Brady’s living arrangements and worry this won’t turn out well for him. Putting temptation under the same roof usually isn’t a good idea! Nevertheless, Brady will insist this is how it has to be. He’ll want to keep an eye on Kristen and make sure their bun in the oven’s properly cared for.

Days Of Our Lives Spoilers: 5 Key Weekly Takeaways From DOOL October 14 To October 18

Over with Kate Roberts (Lauren Koslow), she’ll pass along some news to Victor Kiriakis (John Aniston). Days of Our Lives spoilers say Kate will grumble over Mr. Shin’s CEO choice. Now that Tony DiMera’s (Thaao Penghlis) sliding in that spot, Kate will naturally want to vent about getting tossed aside. She fought hard to come back from the grave, so she’ll be upset that things aren’t going her way.

Other Days of Our Lives spoilers say Sarah Horton (Linsey Godrey) will drop a bomb on Eric Brady (Greg Vaughan). She’ll admit she’s decided to leave town, so Eric will probably try to talk her out of it. When Eric sees that Sarah’s mind is made up, he may shift gears and wish her the best. If the fresh start is what Sarah needs to be happy, Eric surely won’t want to hinder that.

Meanwhile, Xander Cook (Paul Telfer) will frantically try to reach Dr. Wilhelm Rolf (William Utay). He’ll be desperate to stop the plan he put in motion, but he’ll be too late. It won’t be long until Xander finds Dr. Rolf in the square and learns Dr. Rolf decided to give Nicole Walker (Arianne Zucker) the envelope.

At Eric’s apartment, Nicole will open Eric’s special delivery and discover Sarah’s expecting one of her own. The pregnancy test results will leave Nicole concerned about her future with Eric, so Xander will use that to advantage eventually. He’ll hope he can convince Nicole to keep her mouth shut later this week.

It sounds like some fantastic scenes are coming up. We’ll give you updates as other Days news and rumors emerge. Stick with DOOL and don’t forget to check back often for the latest Days of Our Lives spoilers, rumors, updates, and news.